Who’s in charge of investigating complaints related to yesterday’s expansion of the city’s living wage law?

It depends who you ask.

Comptroller Scott Stringer repeatedly asserted that a new executive order signed by the mayor stripped his office of its oversight authority when it comes to the higher wage and new workers covered in the order, handing that power over to the mayor’s Department of Consumer Affairs.

Mayor Bill de Blasio, meanwhile, said the comptroller will continue to investigate any complaints of violations of the law — and that Consumer Affairs will simply be responsible for enforcing those findings, a role it takes in many other areas.

“The bottom line is that we’re very cognizant of the different roles that each agency plays under the charter, and under the executive order the comptroller’s office will investigate complaints related to any violations of the executive order, and will respond to complaints in the first instance. But the Department of Consumer Affairs has the enforcement capacity,” Mr. de Blasio said today after an unrelated Brooklyn press conference. “It is an organization that literally reaches out across the city every day on a variety of issues and has the enforcement capacity to act on these complaints.”

The comptroller was given the power to investigate complaints with the passage of the 2012 Fair Wages for New Yorkers Act, the most recent living wage legislation.

And Mr. Stringer’s office maintains that despite a clause in the executive order saying it “shall not be construed to infringe upon the Comptroller’s responsibility for monitoring compliance with, and conducting investigations under, the Fair Wages for New Yorkers Act,” the act does not allow him to conduct oversight of the new living wage.

“You’re taking that authority to investigate and putting it into a mayoral agency with no history or track record for doing this work,” Mr. Stringer said today.

The executive order expanded the types of workers covered by the living wage law, and increased the actual wage to $13.13 an hour. Mr. Stringer’s office argues that the executive order does not give him authority to investigate issues surrounding that new class of workers, or to uphold the higher wage, and only maintains his responsibility as outlined in the old law — to uphold the now outdated $11.11 wage, and only among the workers covered in 2012.

“This is an unseemly overreach. The order makes absolutely clear the Comptroller’s authority is in no way affected,” de Blasio spokesman Wiley Norvell said. “It’s regrettable that without fully assessing the facts, the Comptroller would try to obstruct the City’s efforts to reach more New Yorkers with a living wage.”

The executive order does give enforcement power to Consumer Affairs. But it names the agency responsible for six of seven parts of the law relating to enforcement; it leaves the following section, giving the comptroller authority to investigate before enforcement happens, unchanged:

That complaint is then to be passed along to the mayor’s designee for review — which the executive order names as Consumer Affairs. There had previously been no agency designated by the mayor, in part because the last administration sued over the living wage bill.

The mayor’s office wasn’t alone in arguing Mr. Stringer was over-reaching in his complaint today, particularly in targeting a measure popular with his fellow progressives. One longtime labor operative whose often been allied with Mr. Stringer called his position “a little baffling.”

“There’s a lot of people who are scratching their heads on where Scott is coming from,” the operative told the Observer.

Today’s tiff is just the latest disagreement between Mr. Stringer and Mr. de Blasio’s administration, coming after the comptroller stood alone in criticizing the first day of universal pre-Kindergarten because he said his office had not received contracts relating to the program.

“I actually think you should be looking at ways to engage the City Council so that they can hold hearings and they can do their work,” Mr. Stringer said. “I’m calling on the City Council to put forth legislation that would give back the authority for us to look at living wage.”

But Mr. de Blasio argued that he had worked with the Council on the issue, despite going entirely around them. And Council Speaker Melissa Mark-Viverito joined him for the order signing.

“The bottom line here is we’ve had tremendous unity with the City Council on this issue. We’ve had a lot of communication with the Council leadership on where we needed to go. Obviously, this is a vision I announced back in February at the State of the City address so it’s been well-known fact for months that we intended to do this,” Mr. de Blasio said. “This was the right thing to do and it needed to take immediate effect.”

Asked about his relationship with the increasingly critical comptroller, Mr. de Blasio told the Observer he was more concerned with getting people higher wages.

“This is never about personalities. We have a job to do. We have to ensure more of our people get better wages and benefits that’s as clear a message I’ve put forward last year and this as any,” Mr. de Blasio said. “We have a way of doing it, we’re doing it. I don’t worry about personalities, I don’t worry about political dynamics, I just want to get something done and we’ve done in a way that was the fastest most effective way.” 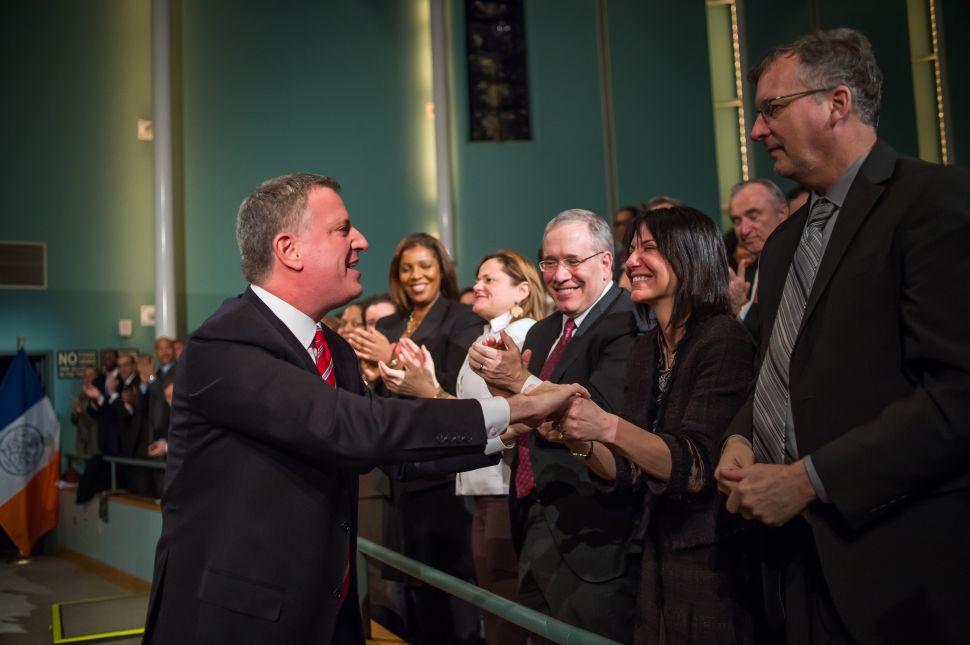