In perhaps the most stunning documentation yet of abuses by Eric Holder’s Justice Department, two former Assistant United States Attorneys spoke to defense attorneys and revealed appalling deceit and corruption of justice. This latest litigation time bomb has exploded from multi-million dollar litigation originally brought by the Department of Justice against Sierra Pacific based on allegations that the lumber company and related defendants were responsible for a wildfire that destroyed 65,000 acres in California.

In what was dubbed the “Moonlight Fire” case, the tables are now turned. The defendants have discovered new evidence and filed a stunning motion. The new evidence and disclosures are being taken seriously by the Chief Judge of the Eastern District of California—as they should be. In a shocking action, Judge Morrison C. England Jr. ordered the recusal of every federal judge in the Eastern District of California.

Sierra Pacific Industries and other defendants were compelled to pay $55 million to the United States over a period of five years and transfer 22,500 acres of land to settle massive litigation brought against them by the United States alleging that they caused a 2007 fire that destroyed 65,000 acres in California. Sierra Pacific has always maintained that the fire started elsewhere and that the state and federal investigators and Department attorneys lied. Now that settlement may go up in smoke because of the new evidence of outrageous misconduct by the federal prosecutors and the investigators from state and federal offices, as well as findings earlier this year by a state judge.

In an extraordinary development, Judge England, Chief Judge of the United States District Court for the Eastern District of California, ordered the recusal of all the Eastern District judges from the case because of serious allegations that the Court itself was defrauded by the government in the original prosecution. To avoid any appearance of partiality, he has referred the case to Ninth Circuit Chief Judge Alex Kozinski to appoint a judge from outside the Eastern District to handle the case going forward. Judge Kozinski has excoriated prosecutors for failing to meet their legal and ethical obligations.

The order notes that the defendants filed an action this week to set aside the $55 million settlement because, as the defendants allege, “the United States presented false evidence to the Defendants and the Court; advanced arguments to the Court premised on that false evidence; or, for which material evidence had been withheld, and obtaining court rulings based thereon; prepared key Moonlight Fire investigators for depositions, and allowed them to repeatedly give false testimony about the most important aspects of their investigation; and failed to disclose the facts and circumstances associated with the Moonlight Fire lead investigator’s direct financial interest in the outcome of the investigation arising from an illegal bank account that has since been exposed and terminated.”

The Sacramento Bee reported on the Defendant’s filing. Indeed, the Defendants’ motion informs us that a former Assistant United States Attorney came forward and disclosed that he believes that he was removed from the original prosecution by “his boss, David Shelledy, chief of the civil division in the United States Attorney’s office,” because he “rebuffed” pressure to “engage in unethical conduct as a lawyer.” Of course, like other former prosecutors who were unethical, Mr. Shelledy is to receive Attorney General Holder’s highest award for excellence—this week.

Well, sadly we have, and we’ve been reporting on it as fast as we can. This is part of a disturbing and rapidly increasing pattern of abuses by this Department of Justice to line government coffers or redistribute the wealth to its political allies—using its overwhelming litigation might and federal agencies as a tool of extortion and wealth redistribution.

The entire original prosecution against Sierra Pacific appears to have been driven by the Department of Justice’s interest in hitting a “deep pocket” for millions of dollars of revenue. The Defendants’ motion to set aside the settlement reveals a series of fraudulent acts by federal and state authorities that defiles our system of justice.

Dick Beckler, an attorney for the company who used to be at DOJ and is now with Bracewell Giuliani, told the Observer, “Sierra Pacific is looking forward to having its day in court and proving all the facts of the government’s fraud on the court.”

A California state judge, Leslie C. Nichols, in a related state case issued orders earlier this year describing what he called “egregious,” “pervasive,” and “reprehensible” abuses in the investigation and prosecution amounting to “government corruption.” He found the state case to “betray the primary purpose of the judicial system—to reveal the truth.” He awarded $32 million in fees and expenses to the Defendants, finding as the Sacramento Bee reports, that the state agency, Cal Fire, “withheld some documents, destroyed other evidence and ‘engaged in a systematic campaign of misdirection with the purpose of recovering money’ from Sierra Pacific.”

It’s encouraging to see Judge England join Judge Emmet G. Sullivan and Judge Bates, and others, as our Article III judges begin to demand that federal attorneys and agents follow the law and their oaths of office. But there remains a lot more work to do. It’s way past time to hold Holder accountable.

When will the next litigation time bomb and scandal explode on Mr. Holder and this administration? He can’t run fast enough.

This story has been updated to add comment from Sierra Pacific’s attorney. 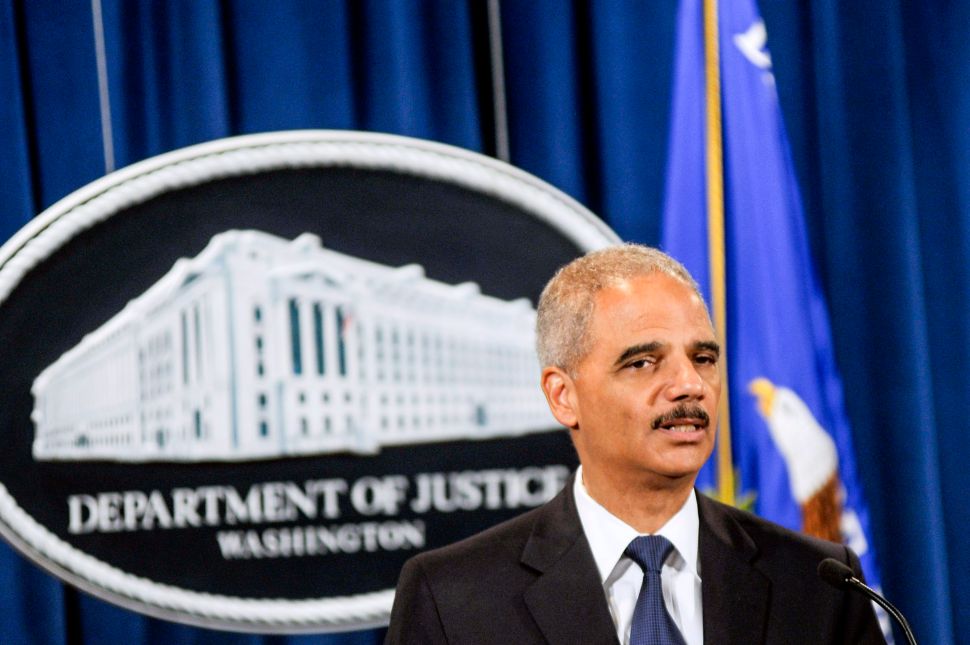