Social media has been a catalyzing force in revolutions around the world. In the past few weeks, Hong Kong has seen its own youth-led uprising, and again turned to social media for solidarity and communication.

But this time, the protest largely turned from sites like Facebook under the possible threat of the police cutting off access to the Internet altogether. Instead, almost half a million protestors downloaded FireChat, a new app that builds a functioning communications network using nothing but the phones in their pockets.

FireChat is an app that uses your phone’s WiFi and Bluetooth capabilities to build what’s called a “mesh network” with other phones. Most phones are connected to each other through a centralized network, so that whenever you text someone, send an email or make a call, you’re doing so through cellular networks first, where communication can be remotely intercepted, monitored, or even blocked altogether.

With a mesh network, the actual network is decentralized. Devices just connect to other devices, and anyone can become a node with an anonymous screen name in that network, as long as they’re within about 40 to 70 yards of just one other node.

“This won’t work well in suburbia or rural areas — it’s for high-density urban areas,” FireChat CMO Christophe Daligault told Betabeat. “Most of our users are in countries like India, Brazil, Mexico and China.”

It’s also useful in areas that don’t have great communications infrastructure, like the developing world. Mr. Daligault says that they won’t often see isolated individuals using FireChat on their own — there’d be no point without a network — but smaller towns and villages will cause download spikes when they build a FireChat network far from the range of high-speed wireless Internet.

French hacker association Breizh Entropy ran FireChat through a series of tests, and though they were impressed at how efficient the app was at building mesh networks and keeping them safe, they were disappointed in how open the network really is. Though you can protect your anonymity on the network, anyone can come and go from the network, and there’s no option for private communications. Using FireChat is more like tweeting than chatting among trusted confidantes.

But the advantages of mesh networks have nothing to do with anonymous communication. While mesh networks are harder to infiltrate than centralized networks, their real strength is holding up even when someone may not have a reliable internet connection, which is what drew in the student activists of Hong Kong’s recent protests.

Hong Kong has been mired in pro-democracy protests in the past couple of weeks, in an event called the Umbrella Revolution, for the umbrellas demonstrators carry to protect them from pepper spray. Because of the high concentration of activists in Hong Kong’s “Occupy Central,” cell networks were straining to serve all of the mobile users, and there were rumors that the police force could cut off Internet access.

Joshua Wong, the 17-year-old activist who grew to be one of the leaders of the Umbrella Revolution, posted on Facebook that demonstrators should download FireChat in case they lost Internet access. His suggestion, well, caught fire. Here’s how FireChat did in Hong Kong from Sunday to Saturday of last week, by the numbers:

Though the protesters never lost Internet access, the density of the protest allowed the activists to communicate with each other without having to worry about interference.

This wasn’t the first time FireChat had been used for a protest. In March, Taiwanese students used FireChat as an integral part of organizing the Sunflower Student Movement, another protest against Beijing’s political influence.

“There were students who were inside parliament, and some on the outside, so if the government shut down the Internet, they all wanted to be in contact,” Mr. Daligault said. “The magnitude of what’s happening in Hong Kong is much bigger than what happened in Taiwan.”

But FireChat wasn’t designed just for protests, and the team behind the app want to build out more features so that it can fulfill a larger purpose.

The Future of FireChat

FireChat wasn’t built to be a protest app, even if that’s the way it’ll be remembered in the wake of Hong Kong. Instead, it’s meant for anyone who wants to build a local network with people nearby when the Internet might not be the most secure option.

“People in Hawaii have told us that they want to get the app before Hurricanes hit,” Mr. Daligault said. “We’ve also had people from the entertainment world say they want the app for big games or concerts when the cell networks are congested.”

The next step for the team is to add features that help make FireChat more reliable and secure, like verified profiles for journalists and encrypted private messaging. And Mr. Daligault acknowledges that in moments like the Umbrella Revolution, all of the anonymity can cause plenty of confusion.

“The downside of everybody having a pseudonym is that you don’t know who’s who,” he said. 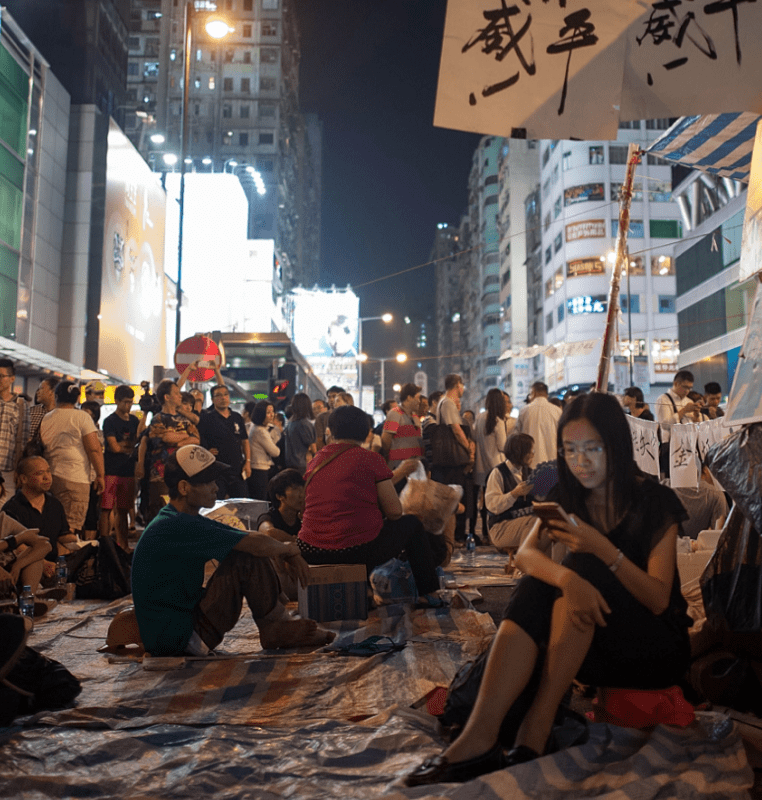