Last night the opening moments of a debate between incumbent Florida Governor Rick Scott and Democratic challenger Charlie Crist featured an almost surreal contretemps about, of all things, a fan. The electric kind that blows air. The debate began with Mr. Crist, looking like somebody who had just found an envelope full of cash in a jacket he hadn’t worn in a few years, standing alone on a stage while moderator Elliott Rodriguez explained that because Mr. Crist had a small fan behind the podium, Governor Scott was refusing to take the stage. Eventually the Governor came on stage and the debate proceeded as planned.

Following the debate, both sides sought to spin the story to their advantage. Mr. Scott’s campaign manager sent an email to supporters saying, ”So, let’s get one thing clear: Rick Scott never refused to take the stage and debate. In fact, our campaign was not notified Charlie had even taken the stage because the last we heard, Crist was in an ’emergency meeting’ with debate organizers pleading for his precious fan.” Mr. Crist’s supporters stuck with the original story and released a copy of the debate rules that included the handwritten clause “with understanding that the debate hosts will address any temperature issues with a fan if necessary.” The language there is not very ambiguous. That the sentence was scrawled under the signatures on an otherwise printed document was a little strange.

This incident makes Governor Scott look petty and Mr. Crist look tanned and smug, but it also is a good reminder of how removed so many politicians are from the concerns of their constituents. The question of whether or not Mr. Crist was allowed to have that fan is much less salient than the question of, for example, why, in a state like Florida that was battered by the recession of 2008 and is still trying to recover, anybody is debating the presence of a fan rather than real issues. The actions of both candidates indicated that minor conveniences and advantages in debates are the lens through which they see their roles as candidates.

There is almost no better way to communicate that you care more about yourself than voters than by refusing to take the stage over something as petty as the presence or absence of a fan. At first blush, Governor Scott looks like the most culpable, but Mr. Crist’s self-satisfied look while standing alone on the stage communicates a sense that he has outfoxed his opponents, but is hard to interpret as that of somebody who is more concerned with helping people than winning the election.

It is natural for politicians to seek every possible advantage — a sweaty looking Mr. Crist would have been good for Mr. Scott — and to try to shakeup their opponent, as both candidates in Florida did last night. However, when these efforts and the petulance around it prevents voters from the opportunity to hear the candidates debate, as it briefly did yesterday, it is the politicians who are acting irresponsibly. During every election season, we are surrounded by comments about how Americans don’t care about politics and are apathetic. As long as our politicians behave the way the candidates for Governor of Florida did last night, perhaps Americans can be forgiven for not having a great deal of faith in their politicians and the system that produces them. 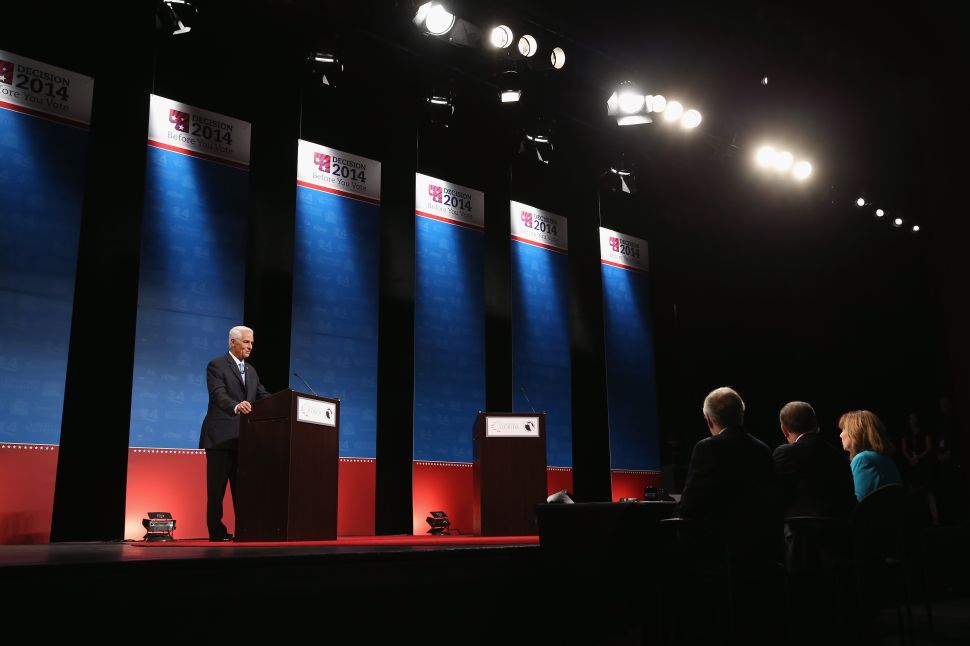