BELMAR, NJ – OCTOBER 29: A man is removed by security guards after a confrontation with Gov. Chris Christie. (Photo by Kena Betancur/Getty Images)

BELMAR – The late Joe Strummer of The Clash voiced an idea in the 1980 song “Clampdown” that some say has become a regular theme in New Jersey Gov. Chris Christie’s political song book: “Let fury have the hour, anger can be power. Do you know that you can use it?”

But when Christie used anger on Wednesday in Belmar to address a heckler, demanding that the detractor on his Hurricane Sandy efforts “sit down and shut up,” the moment led PolitickerNJ to ask some statewide political observers a critical question. With his Garden State poll numbers sagging to an all-time favorability rating low of 42 percent, has Christie’s native Jersey brashness and flashes of anger reached the limit of political effectiveness, both locally and nationally?

“The governor has always defended his behavior, saying that this is his personality and he’s not going to compromise his personality for politics. But that aspect of his personality has not resonated with every demographic group in the state of New Jersey,” said Brigid Harrison, professor of political science and law at Montclair State University. “There are certain people who find his brashness charming, and there are others who find it objectionable.”

Christie’s national profile has risen because of his time as the Republican Governors Association (RGA) chairman, a role in which he has helped raise more $100 million for GOP candidates nationwide. His RGA work has helped Christie build the national network needed for a potential 2016 presidential campaign.

But Harrison inferred that New Jersey voters, who have noticed Christie’s extensive out-of-state travel, might look at Christie’s moments of fiery ire and be left with a nagging question.

“In the back of everyone’s mind in New Jersey, is this really the kind of behavior that we want from our elected leader representing us on the national level? Rhetorically speaking, isn’t this embarrassing?” Harrison asked. “The reality is this: President Obama has been heckled more than any President of the United States. When you watch his response, it is from someone who is in control of the situation. That kind of decorum, which exerts a demeanor of dignity and an aura of authority, is rather standard for Presidents.”

Patrick Murray, director of the Monmouth University Polling Institute, noted that there in an important difference in the way Christie expresses his anger.

“We have to separate his controlled rants with what happened yesterday [in Belmar]. [Christie] got really angry, because the whole Sandy recovery is an Achilles’ heel for him because it hasn’t gone as well as it should have. His only saving grace is that most people in the state really don’t know that,” said Murray, referring to the Belmar heckler’s shouted comments that criticized the governor’s post-Sandy efforts. “[The heckler] was saying that the emperor has no clothes.”

Murray juxtaposed Christie’s Belmar comments with what the governor said about Kaki Hickox, the nurse for Doctors Without Borders who had been working with Ebola patients in the West African country of Sierra Leone. After sparring with Hickox in the press earlier in the week about her quarantine, Christie wished her the best on Wednesday in Toms River as she moved on to her home in Maine.

“It’s a clear contrast when he’s in the zone and when someone can get his goat,” Murray said. “I think we’re going to see more and more episodes when opponents will try to figure out how to get his goat. That will not play well [across the country],” added Murray, specifically referring to recent poll results in Iowa, a key presidential primary state, that showed a high unfavorability rating for Christie. “It’s that love-him-or-hate-him dynamic that Christie provokes in people that could be his undoing if more incidents like this occur, particular outside of New Jersey.”

Yet Matthew Hale, associate professor of political science and public affairs at Seton Hall University, didn’t think that the public will necessarily see a muted Christie any time soon.

“Part of Chris Christie’s appeal is his anger. One of the reasons why people like him is they’ve been angry about the way things are going in the world, and he taps into that,” Hale said. “There is a lot of nervousness and uncertainty about the state of the world, between Ebola and ISIS and other things. The electorate is moving away from anger, and towards fear. People are terrified of what they don’t understand, and he’s appealing to those fears. They want an adult who is going to stand up and be able to handle these situations in a strong manner, and that’s not somebody who is angry. Governor Christie has two ways of appealing to people: one is being angry, and the other being an adult, and he often tries to play the adult part.” 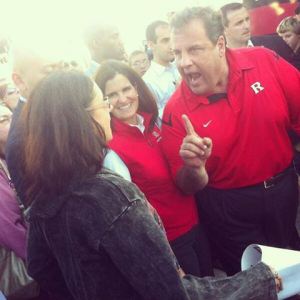