Going down fighting with a final run for mayor, he was done at the end of his last term and now he’s done for the future.

Another chair of public officialdom in city hall or elsewhere will not be his.

Hoffman said the pair  must participate in the program for one year. The state agreed not to oppose their admission into the court-administered program after both defendants signed a consent order today in court permanently barring them from holding any public office or public employment in New Jersey.  If they successfully complete the PTI program, the criminal charges against them will be dismissed.  Deputy Attorneys General Cynthia Vazquez and Cambridge Ryan represented the Division of Criminal Justice Corruption Bureau.

Despite being under indictment, Rodriguez ran for mayor of Paterson earlier this year.

Prior to that, on March 6, the Division of Criminal Justice obtained a state grand jury indictment charging Rigo and Lisette Rodriguez with second- and third-degree charges of conspiracy, election fraud, mail-in ballot fraud and witness tampering, among other charges, for allegedly engaging in mail-in ballot fraud in the May 2010 Paterson city council election and tampering with witnesses in connection with a subsequent investigation by the State Police and the Division of Criminal Justice.  Lisette Rodriguez led her husband’s campaign.

According to the AG’s Office, during Rigo Rodriquez’s 2010 bid for re-election to city council as an at-large candidate, he and his wife allegedly conspired to have campaign workers illegally act as “messengers” and “bearers” for vote-by-mail applications and mail-in ballots when they had not been designated by voters to act in those roles.  It is further alleged that they had ballots submitted as votes for people who, in fact, never received the ballots, completed them, or authorized that they be cast as votes.  Once Rigo and Lissette Rodriguez learned of an investigation by the State Police and the Division of Criminal Justice into alleged ballot fraud, they allegedly spoke to campaign volunteers and voters about how to answer questions from detectives.  They allegedly advised them to provide false information. 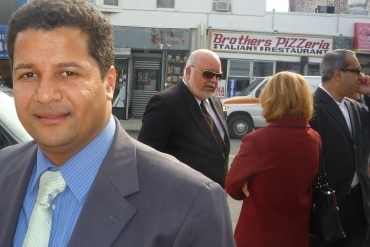