One day in Chicago, a fellow named Davy Rothbart, directionless, despondent and depressed after losing his job, found a strange note on the windshield. It gave him an idea. Look for messages, ideas, poems or one-sentence interior monologues, left all over town in garbage cans, dumpsters, alleys, notebooks, library books—or anywhere else people discard their junk—and publish a magazine. Called Found, that publication is now a cottage industry and Mr. Rothbart has become a star in the offbeat, underground publishing racket. Moving one step further up the ladder, he has now collected the best of his serendipitous “findings” in a new off-Broadway production by the Atlantic Theater Company that is winning new friends and fans of the communication by anonymity concept.

Set to music and lyrics by Eli Bolin, with a book by Hunter Bell and Lee Overtree (who also directs), there isn’t much more to Found than the stuff they found—penned by jilted women, lovesick kids, children in summer camp and wannabe poets of every description (“No more war or disease / We’re all wiped out by killer bees”). But the cleverness and joy in this show is the way the material has been collated and assembled into a collage of songs, dances and musical treats by a cast of ten spirited talents, headed by nerdy but very musically savvy Nick Blaemire (Godspell), who plays Davy and looks remarkably like him, too. There’s a thin idea here, but exuberantly executed by the lively cast. There’s also a thin plot that traces Davy’s attempts to expand his success into a TV show that was rejected. He fell out with his friends, made up, and they all landed on public radio. Now they don’t have to seek, beg or borrow enough material to fill their pages. Found is such a New Wave success that contributions flood their computers in the form of e-mails.

Fulfilling every anonymous need for one minute of success, Found has caught on. The question is, can it reach (and build) a new fan base from a proscenium stage? The answer, at first visit, is yes. The actual messages are projected against the walls, ceiling and floor. Some of the songs are the actual messages set to music. Others are only about the messages. They vary in quality. Some are funny (“Are you from Tennessee? Good! You’re the only ten I see!”). Others are deeply disturbing (“I will find a way to kill myself!”). Still others are funny and disturbing at the same time (“Did you ever cut your skin? For the fun? Feel the pain? Sleep on the street? Take heroin? If so, let’s start a band!”). My favorite: “We all need an enemy to know who we are—thank you for being mine. I hate you very much!”

Two hours plus intermission sometimes seems a bit too long to sustain interest in such varied material, but the 10 versatile cast members, accompanied by a six-man band and bounced all over the stage by Monica Bill Barnes’ deceptively simple but effectively fresh choreography on 28 songs from “Stay Weird” to “Barf Bag Breakup” guarantees something that rings the bell will be found nightly by one and all at Found. 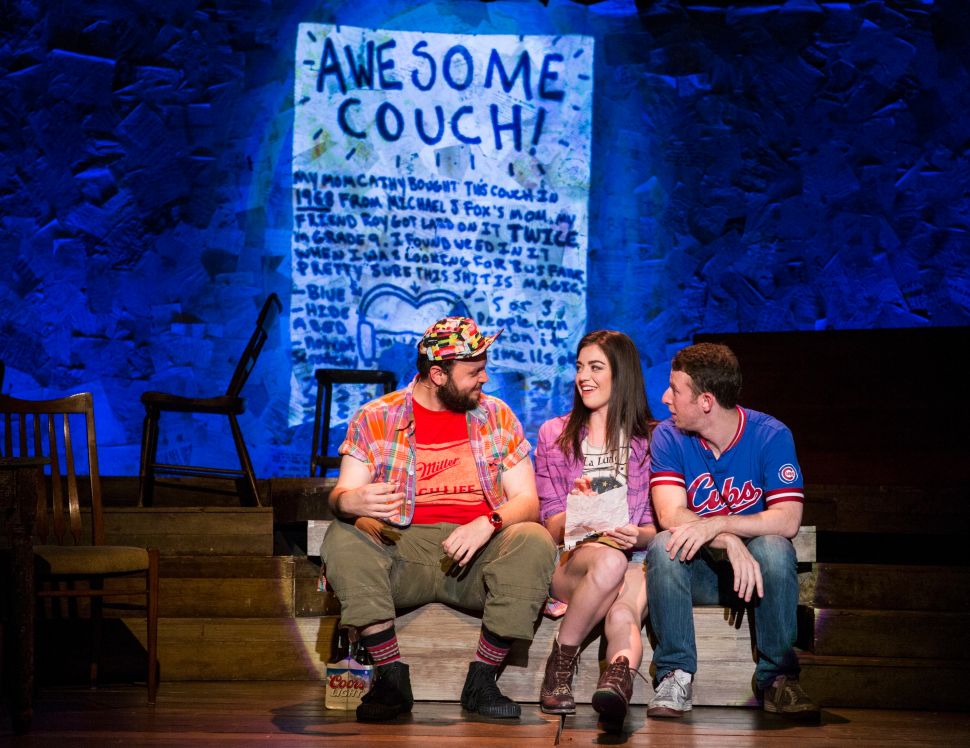