Is any artwork sadder than a sink by Robert Gober? Mute and unplumbed, pale like papier-mâché, a Gober sink perches on the wall with gloomy futility, stripped of both faucets and drainpipe. No here, not for washing and not for drinking.

The disconsolate demeanor of Mr. Gober’s sink sculptures—and the new exhibition at the Museum of Modern Art, “Robert Gober: The Heart Is Not a Metaphor,” has a gallery filled with them, with drawings of sinks and, yes, still more sinks scattered through the rest of the show—can be explained. The works have somehow become, via the mysterious magic of art, emblems of helplessness in the face of the AIDS epidemic that decimated the art world in the 1980s and early ’90s. It was an era in New York when “death had overtaken life,” to paraphrase the artist. For the avant-garde, Mr. Gober’s semi-Minimalist, quasi-Surrealist, neo-Pop works have come to embody that somber time.

Today, a couple of decades later, when a Hollywood movie like Dallas Buyers Club wins Academy Awards, Mr. Gober’s sinks sell for a lot of money, along with other signature works like the wax legs, from the shin down, typically sticking out of the wall at floor level. The auction record for a Gober sink, set just last May, is just under $4.2 million. In terms of art appreciation, what does this mean? Who knows? Maybe super-collectors are as moved by his efforts to memorialize the AIDS era as much as anyone.

Mr. Gober’s art invites just that kind of metaphorical reading, regardless of any denial that might be implicit in the show’s title. It is an art of mourning and, arguably, one that reflects a specifically homosexual experience. Mr. Gober has given the source of the image of a white porcelain sink as both a childhood memory and a dream, and has spoken of using in his work images that “haunt” him—an approach that admits autobiography and trauma.

Before the AIDS crisis, gay liberation had included a lively cultural and sexual renaissance located in New York communal baths, which were of course shut down by city health authorities after the health emergency got under way. It was in this context that Mr. Gober worked out his potent iconography of sinks, drains and flowing , imagery that carries notions of orifices and pollution, of cleanliness and the abject, and even of health and self-esteem.

In one small drawing from 1992, a tiny barred window, as in the cell of a condemned man, frames a glimpse of the free blue sky, a metaphor of cloistered vision. The sheet is divided in two like a latter-day Adolph Gottlieb, and below the image of a window is a drawing depicting a simple drain from a shop sink or basin, which suggests a gateway to “down there,” to cite Huysmans’ celebrated decadent novel. The drawing brings together the circulatory system of both the cell and the sewer, something sanitary and something soiled.

If the sink is Mr. Gober’s receptacle, then the candle must be his phallic symbol. A golden beeswax Untitled Candle from 1991, which could well be the prototype for all other iterations, rises stoutly from a square pubic base covered with real human hair. Its unlit wick testifying to its unsullied state, this “virgin” candle is carnal all the same.

Art critic Hal Foster has suggested that Mr. Gober’s later room installations, with their hand-painted sylvan wallpaper and suggestions of endless flows of pure , could be markers of spiritual renewal. One celebrated work absent from the MoMA show, his statue of the Virgin Mary pierced through her midriff by a large culvert pipe, both deconstructs and reinvigorates a Catholic image of redemption. In this it shares iconographic space with Andres Serrano’s Piss Christ, which insisted on the corporeal truth of a heavenly succor.

On the other hand—the part that is less obviously spiritual—Mr. Gober’s sculpture has a strong sense of what I would cautiously call ’50s Freudian perversity. The works can seem like motifs from the analyst’s couch: castrated limbs, phallic candles and drains that double as sex organs, not to mention a waxy model of a naked behind, set prone on the floor and inscribed with inky bars of music. Is this a hymn to spanking, or perhaps an update of Kafka’s masochistic story, In The Penal Colony?

My official position is that there’s nothing wrong with a little perversion, especially in art, where it can provide a real challenge to bourgeois sensibilities. But does Mr. Gober’s perversity have some metaphysical purpose? Sure it does. It signals the invisible polymorphous libidinal tides that wash through all our feelings and actions.

One criticism might be aimed at the museum, which in its quest for the very best—a museological reason for being—presents Mr. Gober out of context, without the community of other artists whose work would amplify and correlate with his. Felix Gonzalez-Torres, whose billboard-sized photos of an empty bed mourned lost love, is just one example; another would be David Wojnarowicz, who pointedly made homoerotic drawings on supermarket posters for the sale of meats and produce. It’s as if the construction of a Contemporary art historical hierarchy can’t help but mimic the mechanics of the auction market, which makes millionaires of a few and zeroes out everyone else. What a shame.

Overall, the show is both spare and elegant, and easy to take in. Don’t be fooled when you come upon a gallery filled with works by women artists, and think you’re done and back in the regular  galleries. This one-room display, it turns out, recreates a show Mr. Gober had curated. Though I’m happy to see works by Joan Semmel and Nancy Shaver, who are too little known, this “rupture” in the flow was perhaps not the curators’ best idea.

Indeed, the MoMA exhibition was organized in curatorial consultation with the artist, commonplace these days. What this laissez-faire policy sacrifices in curatorial independence it presumably gains in artistic authenticity. And it’s true that nothing adds legitimacy to a retrospective like having the artist involved, especially when the show includes so many finely calibrated room installations, as this one does.

I love the dark passage lined with bundles of to-be-recycled newspapers; these sculptures, which like all of Mr. Gober’s works are in fact hand-made, lyrically suggest the ways that all of us, and our daily concerns, pass forgotten into history. 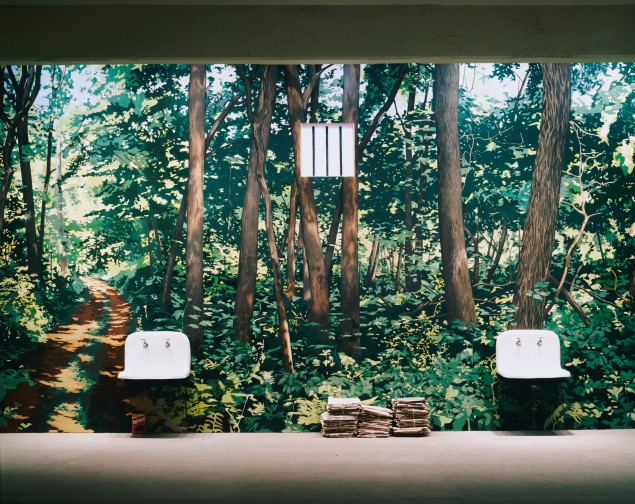