New York teenagers, especially those who attend private girls’ schools on the Upper East Side, may be sophisticated. But nobody expects them to have a casual familiarity with the nature of British libel laws in the wake of the phone hacking scandal, or the mechanics of leaking to Page Six.

Nobody, that is, except Nick Denton and Michael Wolff.

The Gawker czar and the longtime, often prickly media chronicler are probably the last people one would expect to find in front of a roomful of chatty Hewitt girls in navy and tartan skirts, but there they were, in the gym of the all-girls Upper School on East 75th Street, bright and early on a Friday morning (“I don’t have to start work as early as you guys” Mr. Denton said, when his iPhone alarm sounded at 9 am, midway through the event).

The assembly was ostensibly a debate about media privacy, but since the men agreed on most things, it was more a conversation about the way that gossip works in journalism, and, by extension, in high school. If only every girl had two gossip professionals to help them navigate the backstabbing world of high school.

“Journalism is a lot like high school, by the way,” Mr. Wolff told about 165 girls in grades eight to 12.

“I would go so far as to say that everybody in this room has something about themselves that they don’t want anybody else to know,” Mr. Wolff said.

“Do you really have secrets that aren’t out there?” asked Mr. Denton, perched on a stool, in tailored jeans and a leather jacket over a grey shirt that matched his hair and the closely cropped mustache he has been sporting of late.

“I have fewer secrets because of you, Nick,” Mr. Wolff replied.

Topics ranged from the squeamishness of The New York Times to the “elegant fashion” in which actor Zachary Quinto came out as gay in New York magazine to, inevitably, Rupert Murdoch.

“One of the all time greatest invaders of privacy is probably Rupert Murdoch. I’m actually Rupert Murdoch’s biographer. I spent a year with Rupert and then I wrote a book that he hated,” Mr. Wolff said, invoking his white whale just 10 minutes into the discussion.

That Mr. Wolff assumed that all the students not only knew who the aging News Corp. owner is but also understood his significance in the media world either speaks to his optimism about the knowledge a native New Yorker naturally accumulates, as if through osmosis, or to the fact that he has been writing about the media for a very long time.

Mr. Wolff explained that, after he declined a Murdoch PR request to remove the date that Mr. Murdoch met his then-wife Wendi from his biography, the fact Mr. Wolff himself “had fallen in love with someone else” and was getting a divorce became sustained fodder for Page Six.

“And quite brutally so,” added Mr. Denton. “We have both been in Page Six, but that was clearly retaliation. That was gossip news being used as a weapon.”

The moderator asked: are celebrities different because they are public figures? As a an example, she cited George Clooney’s recent wedding, where he gave guests burner phones so pictures wouldn’t leak.

“The real question is are we all, to some extent, celebrities?” said Mr. Denton, who made guests check their phones at the door during his May wedding.

“Most people know most things about you, whether or not its being published,” Mr. Denton advised. “So you might as well, as journalists say, get out ahead of the story and own your own narrative.”

The gossip merchant provided a concrete example: “The beginning of my current relationship was very messy,” he said. “And I assumed at some point it would get out just how messy and how basically triangular the origins were. So I thought I’ll tell the story myself and just say well, love is messy.”

And back in 2012, that’s exactly what Mr. Denton did, after ‘sources with knowledge of the situation’ leaked it to the New York Post.

There was quite a bit of inside baseball (Mr. Wolff gave up Vanity Fair editor Graydon Carter for waving a “courtesy brush” over celebrity profiles and Mr. Denton recounted the Jezebel commenter scandal). But the overall message was, especially coming from Mssrs. Denton and Wolff, surprisingly sincere and positive.

In fact, if they ever get tired of their day jobs, the duo should think about taking the show on the road, helping teenagers deal with the fallout of gossiping and being gossiped about.

Mr. Denton posited gossip as a form of cultural good, a way to help create a world where nothing is damning because everything is; where open information leads to open minds, willing to embrace our essential humanity.

“It’s really painful when it happens to you, but usually, at least to the extent that it’s true about you, it’s better for the information to be out there,” Mr. Denton said. “I am glad that I have been gossiped about sufficiently that I have nothing to fear from being gossiped about anymore. It was extremely liberating. Gossip and social media have actually had a good effect on society because people are more tolerant and it made us all realize that everyone is human.”

Later, speaking to a smaller group of journalism students, Mr. Denton explained that he wished that he had been forced, through the force of gossip, to tell his family that he was gay when he was 22 instead of 32.

Though Mr. Wolff has more conflicted feelings about gossip, he too cited its redeeming value.

“I would have preferred not to have been gossiped about. But I’m still standing. I haven’t missed a meal. I’m still employed,” Mr. Wolff said. “One of the things about gossip and about privacy is you do realize that nobody else really cares all that much.”

The eighth grade editors of the middle school page in The Hewitt Times asked about how social media has changed over the course of the last decade.

Mr. Denton and Mr. Wolff took turns explaining that, back in the old days, when the girls were toddlers, pictures that showed college kids getting drunk could be used against them when they applied for jobs.

“There is enough information about what people drink or who they have sex with that it doesn’t really matter like it did before,” Mr. Denton told them.

“It used to be that everybody could be targeted because everyone had secrets and when your secret came out, it was a huge reveal,” Mr. Wolf added. “But if you create a world where everyone’s secrets are revealed, then it becomes clear that everybody has the same secrets. And then it’s hard to hold one person accountable.”

The girls nodded, wise beyond their years. Before leaving, they asked a teacher for a note. They were late to math class. 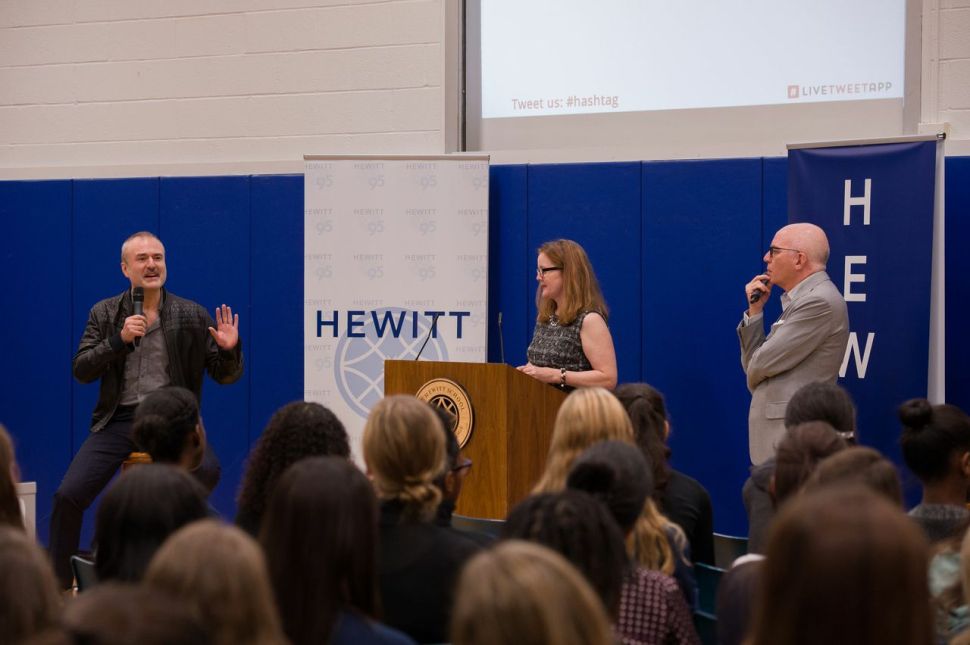