I’ve been saying through Gotham’s first two episode’s that this shown needs to put on its big boy tights and decide just what kind of show it wants to be. Serious cop drama? Campy comic book hour? Four straight hours of little Bruce Wayne listening to death metal while drawing goth fan fiction? Unfortunately, I’m the only person that wants the third option, but Gotham did finally make a decision. This week, a vigilante murdered people by strapping them to weather balloons, and it was such a stupid, ridiculous concept, and it was also the first thing that felt natural on a show like Gotham. Does that make sense? No, not all, and that’s why it worked. It was darkly funny, absurd, and for the first time entertaining from beginning to end.

“The Balloonman” did away with (for the most part) the testosterone-fest that was Jim Gordon’s interactions with any other character, and also kept its wink-nudge references to ghosts of Batman’s future to a minimum. Even the familiar faces that did show up were subtle, or drove the plot of the show forward. And, most importantly of all, this episode added in characters and plot elements that we haven’t seen before. Like ones the writers made up themselves!

Of course, Gotham still isn’t perfect. I’m pretty sure Barbara Gordon has only left her apartment once since the pilot, and her outfits always seem to include an element of Jim’s wardrobe and no pants. But she’s a pothead and a former lesbian and former hardcore drug addict now? Little Selina Kyle is still basically useless, and our main character Jim Gordon still needs to tweak his jaw clenching down like three notches.

And of course, although this show had less of them than normal, let us run down every reference, fact, and nugget of Bat-history brought up in “The Balloonman.”

Didn’t you say something about Professor Pyg last week?

I did, actually. I thought that maybe, possibly Fish Mooney’s waiter/sex toy Lazlo could be an allusion to Lazlo Valentin, better known in the Batman universe as Professor Pyg. Well, Gotham Lazlo gets offed this episode because he has the nerve to not enjoy getting his ass kicked, so we don’t have to worry about him anymore.

But in the first two minutes of the episode, this guy shows up. For visual reference, Professor Pyg from the comics looks like this. So it’s like, is there going to be a weekly reference to Prof Pyg that turns out in the end to not be Prof Pyg (because as we learn later in the episode, that ain’t Prof Pyg.) Because I don’t know whether I would enjoy that or not (spoilers: I would enjoy that very much.)

What about all these people that get killed by The Balloonman? Lieutenant Cranston? Cardinal Quinn? Ronald Danzer? Are they from the comics?

Besides the word combination of “Danzer and Cranston” sounding to a person not really paying attention like the beginning of Rudolph the Red Nosed Reindeer, no, I don’t believe these people are references. Which. Is. Awesome. I know they’re minor characters that die as quickly as they are introduced, but Gotham needs its own characters. It needs to be its own thing, which it most definitely was not until “The Balloonman.”

Although if you really want to do a deep dive, Cranston gets murdered by the Balloonman, who turns out to be named Davis Lamont. Lamont Cranston was the real name of The Shadow, a character that first appeared in 1930’s pulp novels. The Shadow wore a scarf around his face and a black hat just like Lamont was when he killed Cranston this episode, so that was either intentional or the writers accidentally referenced something that about four people noticed.

And I don’t know, maybe Cardinal Quinn is like the uncle of Harley Quinn, or something. And Lieutenant Cranston does share a last name with Bryan Cranston, who provided the voice of Jim Gordon for the animated movie Batman: Year One. And who voiced Batman in that movie? Ben McKenzie, who plays Jim Gordon on Gotham. So there’s your fact of the day to look super cool at parties.

What kind of sandwich does Oswald Cobblepot order from that food truck right after knifing the shit out of that one guy?

Tuna because he’s like a penguin and penguins eat fish. Tuna is a fish. Nailing this. Besides looking exactly like a distant cousin of mine who lives in Staten Island (a place ten times scarier than Gotham), Sal Maroni is actually a huge part of the Batman universe, with his first appearance coming in Detective Comics #66 all the way in 1942. In every iteration of him in the comics he is either directly responsible for or heavily involved in the facial scarring and eventual insanity that turns District Attorney Harvey Dent into Two-Face. More recently (since, like, the 80’s) he is usually in some heavy duty feuds with rival Carmine Falcone, who if you aren’t really keeping up, is also Rawls from The Wire.

With Master of Sex alum Nicholas D’Agosto recently announced as Gotham’s Harvey Dent, there’s a good chance Sal up there is going to interact with him. Which, honestly, would make Two-Face like 40 years old by the time he meets an adult Batman, adding yet another super villain to the list of people Batman should not have this much trouble beating up.

And how about that Balloonman?

For all intents and purposes, The Balloonman is a Gotham original. There was a guy on the Adam West show called The Puzzler that used balloons, but he was basically just a Riddler knock-off that wore funny hats (note to Gotham writers: we want Puzzler). But for something as ridiculous as a guy that ties his victims to weather balloons is, this original character actually added a ton of interesting points to a Batman prequel.

First off, he only kills people (via balloon, I repeat) that technically deserve it — a crooked cop, a pedophile in the clergy, a shady politician. The people of Gotham actually support him, because he is doing what the incredibly corrupt police system of Gotham is never going to do. In the end, people like Jim Gordon and Lamont have drastically different methods but the same goals, and both are ultimately futile. In the end, what good is one straight man against a whole city of crooked people.

Which leads to the ultimate question of Batman. What good is one man protecting a city that seems intent on destroying itself? And the biggest question of them all — is Batman there because of the villains, or are the villains there because of Batman? In the end, baby Bruce Wayne (apparently past his death metal phase and now in his manorexic period), condemns the Balloonman, saying “he killed people. That made him a criminal, too.” And as we all know (just me?) Batman has one rule — no killing. A unique character, adding to the Batman backstory in its own subtle way, this is all I ask of you Gotham. 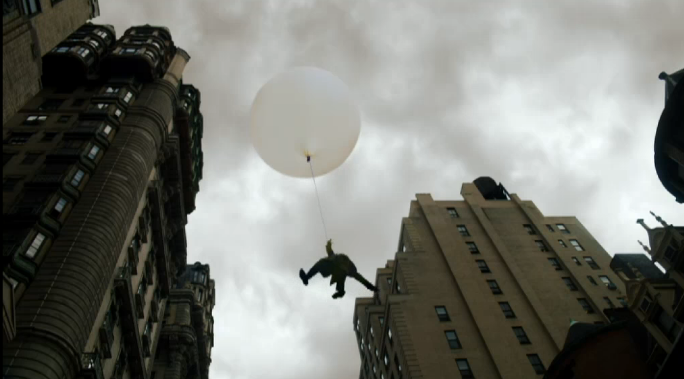