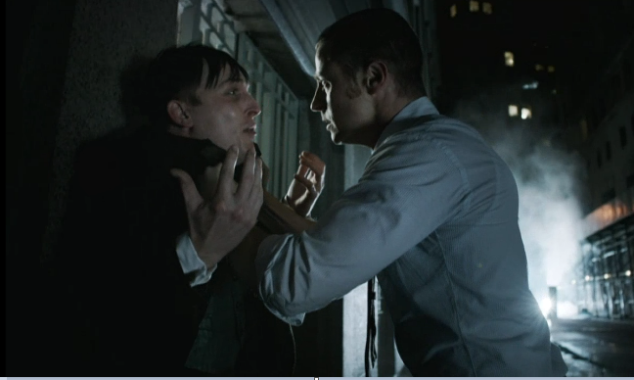 The more stream-lined, overarching gang war story between Carmine Falcone and Sal Maroni with supporting players Oswald Cobblepot and Co. have Gotham set firmly on the right track after its rocky start. The show is like a quality steak that needed a slow burn to finally get cooking. But like with most steaks, Gotham desperately needs to trim the fat.

What I’m trying to say is, there are so many aspects of every single episode of Gotham that just do not need to be in that episode. That one final thing that the masterminds behind this show need to realize if  they want Gotham make the leap from entertaining to spectacular, is not everyone needs screen time. Ensemble shows like Orange is the New Black and The Sopranos thrived because sometimes characters got put on the backburner, making room for what was truly important that episode.

And in Gotham’s case, what is important is never, EVER Barbara Gordon. More so this episode than any other, we see that has no purpose for Barbara other than to be Jim’s wife. It has to be an inside joke between someone on the creative team that Barbara is just constantly in her inexplicably beautiful apartment, holding some sort of drink in her hand. Doesn’t she have any other hobbies/jobs/aspirations other than stare out the window and wonder what Jim’s doing? When she told Jim -in the middle of Jim’s place of work, mind you — that she “won’t live like this,” I can’t help but wonder, live like what? Like an apparently super rich woman who stays home and drinks (or smokes pot) all day, and at night you bitch that your husband isn’t telling you things about his job he has every right not to he is a homicide detective in Gotham city in a war with the mafia, all because you believe your ex-lesbian lover who breaks into your apartment over your fiance? What I’m saying is, Barbara’s the worst.

All I need from Gotham every week is the gang war plot, a cool villain of the week, Jim/Bullock banter, Alfred being a hardass, and Oswald Cobblepot killing everyone. Barbara, Montoya and Allen, Fish Mooney, Edward Nygma, and the odd Batman reference here and there can come in sporadically, when they have something to offer the plot.

And speaking of references, let’s run down every reference, fact, and nugget of Bat-history brought up in episode four,“Arkham.” 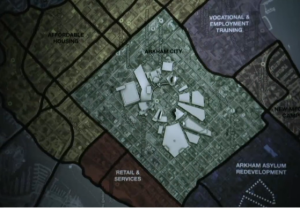 Arkham City is a concept introduced in the video game/reason I got a C in Lit Theory my sophomore year of college, Arkham City, and later a comic series of the same name. After the governing body of Gotham realized, boy people break of Arkham Asylum a ton, they had the genius idea to just wall the damn area off, creating a city basically run by the inmates. This, in short, goes horribly wrong.

But since the mayor of Gotham is also Harland “The Blaster” McGuiness from Sharknado 2, I wouldn’t put that plan by him.

Does Bamonte’s have a location in Brooklyn AND Gotham City? 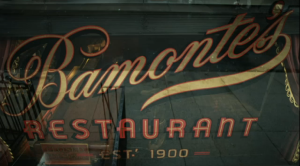 Are the names of those two Gotham councilmen that get murdered via eye puncture a reference to anything Bat-related?


Councilman Jenkins and Councilman Zeller? Well, the only thing that comes to mind as far as Jenkins is concerned is Paul Jenkins, a longtime writer who had runs on the mini-series Batman: Jekyll and Hyde and the rebooted Batman: The Dark Knight series. What I most remember Paul Jenkins from, however, is a story he told where DC gave him an editorial comment that basically said BATMAN NEVER SITS, which led to the creation of this Tumblr filled with pictures of Batman sitting down.

As for councilman Zeller, there is only one answer, and that answer is this 1987 Zeller’s ad featuring Batman, Robin, and the Joker’s scheme to charge way too much for toys.

[youtube https://www.youtube.com/watch?v=SEvYkpcWSo0]
And what’s up with the assassin that goes around doing all that eye-puncturing? Gladwell, or whatever.

The name Richard Gladwell itself really means nothing in the Batman universe, so maybe he’s someone specifically made up for the show. But something I found mighty interesting is when Gladwell said, “As my father said, ‘Simplicity is the ultimate sophistication.'” This quote, while it was never actually proven to be said or written by this person, is often attributed to Leonardo da Vinci. While there aren’t any Batman villains who are explicitly the son of Leonardo da Vinci, there are a whole bunch that are much older than they appear. Most notably is Ra’s al Ghul, Batman’s immortal mentor, but I doubt they’d put him on the show in such a throw way role, and also that guy isn’t Liam Neeson so the point is moot.

Also, fun fact of the day, Batman co-creator based Batman’s cape design partly on the drawing of Leonardo da Vinci’s ornithopter. Which I’m sure is exactly what this episode was referencing.

What songs were those two girls (the ones that Fish eventually had beat the shit out of each other) singing?

The first one sang “Ocean Rain” by Echo and the Bunnymen.

The second, and far more badass, girl Liza sang “Spellbound” by Siouxsie And The Banshees.

So what I’m saying is, if you ever find yourself in a street fight over who gets to work in a crime boss’s night club, “Spellbound” is the way to go.

Is Barbara Gordon always this useless?

The question I get asked the most because of these things is whether Barbara Gordon is from the comics, mostly out of some hope that she is and eventually gets killed off. Well, Jim and Barbara eventually have a baby, so we’re going to have to wait for that. But Barbara does at least have one purpose — that baby she pops out is Barbara Gordon Jr., who goes on to become Batgirl.

Who, of course, eventually gets shot in the spine and paralyzed, but that won’t happen for at least five seasons. 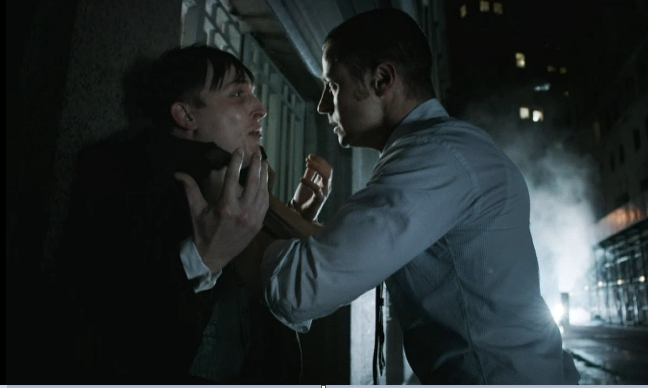