Despite its name, the California coastal town Gracepoint is anything but. Greypoint, Gloomypoint, or even BummerBeachPoint would more aptly describe the town that is notably more Cabot Cove than Mayberry. And with the prolonged search for twelve year old Danny Solano’s killer, the town–and the show–has grown a tad wearisome. The residents seem to believe they live in a beach lined utopia when in reality they’re an odd lot, each concealing their fair share of secrets. From the get, accepting Gracepoint as the picture of small town sensibility has been a tough pill to swallow as we are concurently made to believe that everyone is suspect.

We’re told (over and over again) that this sort of thing just doesn’t happen in this sort of town. And though it is impossible they are all responsible, the detectives are set on following every single lead to to get to the bottom of this, taking us on an episodes-long roundabout to solve the case.

Each of Gracepoint’s residents are creepier than the next and by last night’s episode, it seemed the countless interrogations had become predictably circular. By the end of the first episode in this American adaptation, we were certain Danny’s father Mark was to blame for the bludgeoning. Especially since he was behaving so strangely and unable to provide an alibi. It wasn’t until the END of episode three we learned the reason for his sketchiness had to do with an extramarital affair with the hotel manager Gemma Fisher.

With Mark off the list Dean, Chloe Solano’s boyfriend, was made to look suspicious. Hell, even Chloe was a possibility for a minute. I mean, where did that money come from?

And he certainly didn’t not look guilty after he took off running when Ellie and Detective Carver confronted Dean on the docks about the coke he sold Chloe. The moment was served with another side of suspense when Carver fell into another one of his mysterious feverish episodes mid chase. Last week we found out there is something medically wrong with him but we’re no closer to finding out exactly what that is just yet. All we know is that it inhibits him from running after the wrong suspect. Which is what Dean ended up being.

Then the detectives turn their attention to the terrifying trailer park lady with the dog, that for reasons I can not explain, is also atypically creepy. Aside from her distrust of police officers–an assumption based solely on her affinity for mean mugging Detective Miller and Carver– we also learned Danny’s missing skateboard is hidden in her closet. Last night we saw that one of the reasons she’s so grumpy could be because she has a weird crush on a man half her age, Mark’s colleague Vince. She approaches him in the shed and invites him to dinner, stating eerily “We need to talk.” Vince insists he wants nothing to do with the old lady (I mean, can you blame him?) and that he is not coming to dinner. But this does not stop the crazy old lady from buying a live chicken to make for their trailer-park romance of a dinner, stroking it tenderly as she walks home, and then calmly snapping it’s neck. The moment provided us with yet another insight into her creepiness and a better understanding as to why Vince did not take her up on dinner.

This is where the slow burn really comes in. Random suspects are brought to our attention — the vagrant backpacker, the telephone operator who hears dead people, Reverend Paul who is inordinately interested in Beth—and then swept under the rug to deal with later as each new distraction arises. During last night’s episode, the cops matched the phone number in Danny’s jacket with the wayward backpacker’s. They then sent out a town-wide alert to find out if anyone knows who he is. As it turns out, Danny’s mom Beth remembers seeing him the week prior when he briefly came into her office. And just when you’re thinking this suspect will result in yet another dead end, she remembers he complimented a picture of her “beautiful family” on her desk. At which point it seems he must have done it. After all, he’s wearing a bandana, so he must be guilty. But just when we’re sure the mystery has been solved, we see an altercation with Reverend Paul and the telephone man who told Beth that Danny was killed by someone he knew based on the voices he hears from the other side. Beth, grieving and desperate to find out what happened to her son, confesses she would like to believe he’s telling the truth, which sends Reverend Paul into a rage spiral that results in a confrontation of the street. The Reverend pushes the telephone man up against the wall, does the whole macho man thing, and says something to the effect of “Leave Beth alone.” Which on the mean streets of Gracepoint translates to “Stop talking to my woman.”

Though this behavior seems a little of out character, it’s the telephone man’s chilling response that makes us question if he’s the one we’ve been looking for. “I’m really happy Beth has you. I know how close you two used to be.”

Despite the tedious merry-go-round of false starts, there is a certain “I can’t quit you” element to the prolonged suspense. As defeating as it is to learn that yet another lead is a dead end, we are immediately sucked back in with another option. The sheer impossibility that everyone is somehow to blame causes one to wonder what the hell the writers are thinking? Where are they going with all of this? What will happen once they find the killer? Who is Danny’s killer? Will it follow the exact trajectory of Broadchurch, the British drama that inspired the mini series or will something come out of left field?

A television optimist can’t help but eat up all of this slow but tense building in hopes it will result in one of those deliciously satisfying “OMG” TV moments. We all know the best shows unfold in ways the audience would have never seen coming and since Gracepoint has damn near exhausted almost every one of the potential suspects, I think I might just be one of those optimists. 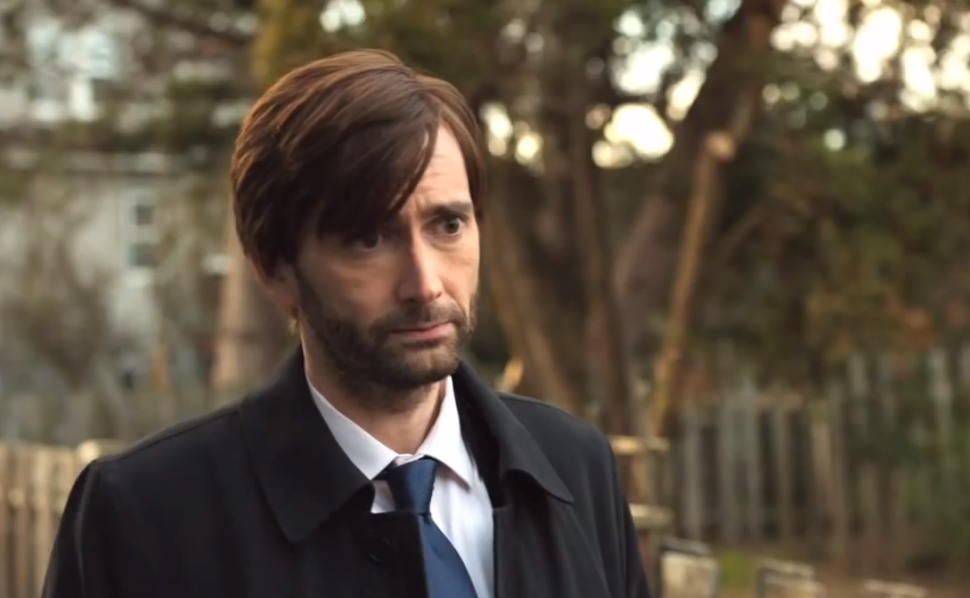