From the moment that we first met Emmett Carver, we knew he hated Gracepoint. “I hate the air. I hate the sea. I hate the people and their smiley friggin’ faces.” Having recently moved to the small beach-front town and taking the promotion promised to his now partner Detective Ellie Miller, the always grumpy detective is faced with the challenge of finding a murderer in a small town haystack. New in town and pissed, Carver has his work cut out for him because Gracepoint is just the kind of town he hates, the kind where everybody knows your name. Nothing bad ever happens there—as everyone keeps reminding him– certainly not the murder of a twelve year boy.

His biggest challenge is perhaps the constant bickering with his distractingly optimistic partner, Detective Miller, or Ellie as she insists he call her (though he never does.) Possibly because her son was friends with the victim, or possibly because she herself embodies that small town sensibility, her emotions often interfere with her ability to critically analyze the evidence of the investigation.

Ellie is constantly on him about classifying basically everyone in town as potential suspects. ”He wouldn’t do that” she pleads about his principle suspect, the victim’s father Mark Solano. After his prints were found in the rental home Danny was murdered in, Mark moved to the top of Carver’s You Probably Did It list. After repeatedly lying about where he was Thursday night, Carver becomes even more suspicious of Mark, who is obviously hiding something. Unable to provide an alibi last week, Carver brought Mark in for further questioning. He suddenly (and suspiciously) remembered that he was with his colleague Vince, claiming he couldn’t remember before because he is stricken with grief over the death of his son. But when it turns out that Vince was not only not with Mark that night but covering for him, Carver is sure that Mark is to blame for Danny’s death. Making matters worse, Mark still refuses to give an alibi, making him look majorly guilty.

“If my kid died, I’d do whatever I could to help the police. I just would.” Carver reasons with the suspect, providing a rare glimmer of humanity.

The interrogation leads to a few more dead ends. The first of which is Susan, the terrifying woman in the trailer park with the always barking dog. Mark claims his prints were found at the rental house because she hired him to fix a broken pipe there a few weeks prior. A claim she plainly denies. Angry, Carver arrest Mark for  interfering with a murder investigation and holds him for several hours until Gemma Fisher comes to his rescue claiming Mark was with her Thursday night. Like with her, with her, until 1am.

The show addresses themes of guilt and penance by mirroring these feelings in Mark and Detective Carver who both suffer from deep rooted self hate that permeates the entire show with grim heaviness. We see this when Mark admits that he believes his son’s death was some sort of karma for having an affair and again when an old friend asks Carver why he stays in a town he hates so much. “Penance” they both say, but what Carver is paying for is still unknown.

What we do know is that Carver is also dealing with a medical issue that strikes suddenly, making him immediately dizzy. He counters the dizziness with short term fixes like jabbing an Epi-pen looking needle into his upper thigh and wincing until the sedative kicks in. When his friend–who also happens to be a doctor- looks over his records he tells the gruff Detective this ailment is like a “ticking bomb” inside of him and advises him to stop any and all stressful work until he has recovered. That of course cannot happen 1) because Carver is in the middle of a murder investigation and 2) because Carver believes he deserves whatever discomfort he feels.

Though he doesn’t know it, the whole town is faced with feelings of guilt. Beth, Danny’s mother is hiding her pregnancy from everyone except the priest she has some sort of weird flirtation with. Chloe, the victim’s sister is concealing the identity of the man who sold her the coke the detectives found in her room. Anxiety of keeping secrets weighs on them symmetrically. Even the “telephone guy who hears voices” is wrought with guilt when he has to bother a grieving Beth with a message from the other side. He’s quite used to people responding negatively to his “abilities.” He reluctantly tracks her down and informs her that Danny has spoken to him from the dead and wants his mother to know what someone close to him was responsible for his death.

By the end of the episode we are feeling as burdened and grim as Detective Carver, who after a long day of arguing with Ellie and cross examining lying suspects is ready to call it a night. As he heads to car, he’s met by forensic who recently discovered a phone number in the lining of Danny’s jacket. “Must have slipped from his pocket” he tells a weary Carver, knowing he’ll have to come back in to the office and investigate. The show ends as he types the digits into a computer wearing the opposite of a smiley friggin face and we’re left somber yet full of questions:

What is the mysterious disease Carver is suffering from?

What does the bag of cocaine have to do with the murder case?

And mostly, will Carver reveal what is really inspiring his unrelenting angst?

Hopefully the somewhat slow paced episode will be met with answers next Thursday. 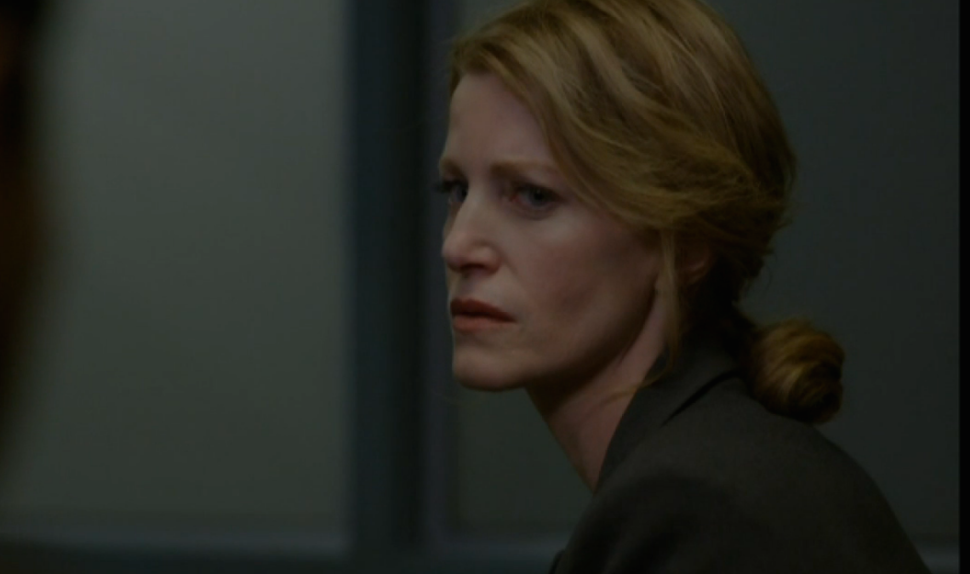