If you caught last night’s premiere of Gracepoint and had a sudden bout of deja vu, you are not alone. Fox’s new crime drama is a remake of the British hit, Broadchurch, though unlike other American adaptations such as House of Cards or The Office, Gracepoint  is a near word-for-word replica. It even features some of the same actors and many of the same shots which evoked a sensation that is not unlike the one I had when watching Gus Van Sant’s shot-for-shot remake of Pyscho. Gracepoint opens with the same eery shots of the small, beach community for which the show is named. We see a shot of a little boy’s room, which we later discover belongs to Danny Solano. A similar blue bedroom and empty bed are panned over and familiar ominous music implies something bad is going to happen. We then see Danny standing on a cliff overlooking the beach with tears streaming down his face and blood dripping from his finger tips, exactly like in Broadchurch.

At this point, the similarities are obvious but it seems improbable that the entire show will be as exactly replicated. Until the first scene:

After making her way downstairs, Beth’s mother– who lives down the street– is making pancakes while Beth’s husband Mark (played by Micahel Penna) and daughter have breakfast. At this point the word-for-word-ness becomes freakishly obvious. Mark leaves for work and strolls through the town saying hello to LITERATELY everyone for what seems like an unbelievably long tracking shot (but again, I’ve already seen this exact same scene in the British version.) This is obviously intended to indicate that Broadchurch Gracepoint is a friendly, small-town where nothing bad ever happens and everybody knows your name. Oops, thats Cheers. But judging by the way they totally ripped off one show, I wouldn’t be surprised if Sam Malone made a cameo.

As he strolls to work, Mark runs in to Ellie Miller (played by Anna Gunn), a detective who has just returned from a weeks-long vacation and is expecting a long awaited promotion upon her return. She soon learns that the job has been given to DI Emmett Carver while she was away. She hardly has time to be upset about this grumpy man taking her promotion because news that a little boy has been found dead on the beach sends the pair to the scene. Because this is Ellie’s first murder case — remember, the tracking shot indicated this is a friendly place— she begrudgingly takes instructions from Carver.

Here we begin to see the American adaptation is really trying to distinguish itself from the original:

Detectives have gathered where the body of little boy has been found beneath a cliff. Ellie begins to cry and reveals the boy is none other than her son’s best friend Danny. Upon arriving, Beth sees Ellie and recognizes her son’s sneakers under the cloth covering the body. She bursts through the police tape and runs toward the body. Police hold her back and Ellie looks on in horror. This should have been a very sad scene–and it was, the first time I saw it–but I couldn’t concentrate because  she kept screaming “Those are Danny’s sneakers!” where as in the original, she screamed “Those are Danny’s trainers!” But the (minor) differences don’t stop there. In the same scene, we learn that Gracepoint-Danny is 12 years old whereas Broadchurch-Danny is 11. Clever, Fox. And later find out the reason no one found out he was missing until late in the afternoon was because Danny often wakes up early to attend a wildlife group meeting at the beach. This differs from the paper route he has in the original. I know. Shut the front door. The detectives cross examine the man in charge of th wildlife group–Nick Nolte…I mean, Jack Reinhold–  and we’re supposed to get the sense that everyone in the town is suspect.

We later find out that Danny did not jump or fall off of the cliff he’s lying near, he was murdered. Again, there is a subtle change here — in the original he was strangled, here it was blunt force trauma— but all of the other details are the same. The agent informs Ellie and Carver that the death occurred while the child was facing the killer and his death was likely incredibly brutal (Basically warning that this this will not be a feel-good, family show.)

Here’s hoping these minor changes will lead to different plot line down the line. Perhaps the purpotraitor will be an unexpected character in this version since the murder itself differed slightly? One can hope.

Ellie goes home to tell her son that his best friend has died in a scene that would have been identical to the original had the acting been on par. Not that it was particularly bad, but the original featured a nearly perfect performance from Olivia Coleman. This version felt a little harried, especially when her son Tom suspiciously deletes all of his texts from Danny and  empties his computer hard drive. The original version was subtle and therefore much more creepy, whereas this felt very showy and overly rushed.

If you haven’t seen the original — but really, you should because I’m pretty sure we could make a weekly drinking game out of comparing the two shows— Gracepoint would be a compelling show. If anything, it’s incredibly picturesque show chalk full of the kind of red herrings true crime-drama junkies can appreciate. For example, a grief stricken Beth questions why Mark did not check on their son before he went to sleep. Eery music creeps up in the background as she further questions why he was out the night their son disappeared, to which he plainly replies that he was”working.” Which could be true but he’s a plumber soooo..that’s weird.

Other suspicious characters include a rough-looking old woman, who doesn’t have lines but is frequently in the background with her dog, grimacing and squinting in a manner that implies she may also be a suspect. Or in need of sunglasses that provide better UV protection but the first assumption seems more likely. More trouble arises when Danny’s older sister leaves a toy monkey on the beach as a memorial for her brother. Ellie’s nephew Owen (played by Kevin Zegers)– who is a journalist desperate to break a big story— observers this and immediately tweets that the victim is Danny Solano. Another journalist arrives from San Francisco after learning about Danny’s death from Owen’s tweet. She heads to the beach and steals Danny’s toy monkey which would make me hate her had I NOT ALREADY KNOWN SHE WAS GOING TO DO THAT. This show. Within minutes of the Tweet, the whole town knows about Danny providing Carver with an opportunity to burst into the office and yell at everyone in his American accent? Sure. Let’s call it “American” for now.

Perhaps the best/worst divergence from the original is the character DI Emmett Carver who is known as Al Hardy in Broadchruch. Both played by David Tennent —I really wasn’t joking about that drinking game– but Tennet’s portral of DI Hardy was noticeably better. Whatever the case, it is certainly distracting, even if you didn’t know he’s British in real life because seriously, who talks like that?

The episode wraps with a lengthy display of this accent as Carver provides local news sources with an official statement about Danny’s murder. He promises the town he will catch whoever is responsible as the camera pans over ever resident of the town, implying they could all be possible “suspects.” 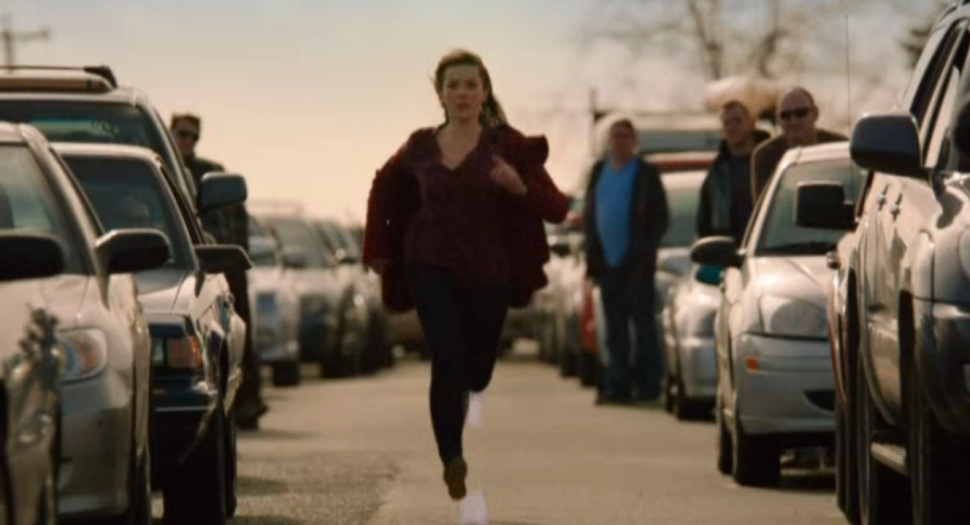