Congressman Michael Grimm ripped the federal Center for Disease Control over its response to the Ebola epidemic in Africa and the recent cases of the disease in the United States, saying the agency should have reached out to him about the crisis.

“I don’t think that the federal government’s doing enough. I don’t think the CDC is doing enough. As evidenced by the fact that we have in this district, on the other side of the bridge, we have the largest Liberian population in the entire country. The entire country. And the fact that the CDC has not reached out to me, as the local federal elected that lives in that borough, tells me they’re not doing enough,” Mr. Grimm said at a Brooklyn candidates forum last night.

Mr. Grimm was referring to Staten Island’s “Little Liberia,” neighborhoods in Clifton and Park Hill believed to be home to the largest population of Liberians outside of Africa. The West African nation has borne the brunt of the Ebola crisis in Africa, and it was a Liberian citizen who brought the disease to Texas where it has now spread to two nurses.

“If they’re not there, in the largest community in the country, then where are they? So they haven’t done enough, I’m very concerned, I’ve tried to take a leadership role, but I’m limited as one U.S. Congressman into what I can do to pressure this administration, because sometimes it’s like hitting a brick wall,” Mr. Grimm, a Republican, said.

The CDC, an arm of the Obama administration that is run by a former New York City health commissioner, has been a frequent target of Republicans in recent weeks, with many calling for flight bans the CDC has argued could be counterproductive.

Mr. Grimm said he had met with a number of local Liberian leaders in Staten Island, one of whom told him that he had recently visited his native country and returned to the United States without going through any special check-up process. Mr. Grimm said he believed there should be thermal imaging cameras–which can pick out a person with elevated body temperature–at airports, and that flights to afflicted areas should be restricted.

“He wasn’t screened at all. And he just came from Liberia. So there’s no question about it, they’re not doing enough,” said Mr. Grimm, adding that he believed President Barack Obama and his advisors had underestimated the virus. “The protocols in place are inadequate, they’re not enough. And what we’re learning about Ebola every single day is more and more that what they originally told us, the CDC and the administration, is absolutely, it’s a lot worse. And it’s getting worse.”

Mr. Grimm–a former United States Marine–also expressed fear that the hundreds of military personnel being sent to Africa to help manage the crisis might not be sufficiently trained, noting that the Texas nurse who contracted the illness was supposed to be a specialist in infectious disease.

Nonetheless, Mr. Grimm warned that the spread of panic was worse than Ebola–and argued that the CDC had not instructed the public in how to differentiate the disease from more minor ailments.

“Panic is the worst thing in the world, we don’t want to panic. But as we approach flu season, as we know, the beginning stages of Ebola are identical, symptomatically, to the flu. We need to get ahead of this, we need to make sure people who come down with the common flu aren’t panic-stricken into thinking that they have Ebola. The only way to do that is through mass education, and I haven’t seen that from the CDC,” he said.

The CDC did not immediately respond to requests for comment. 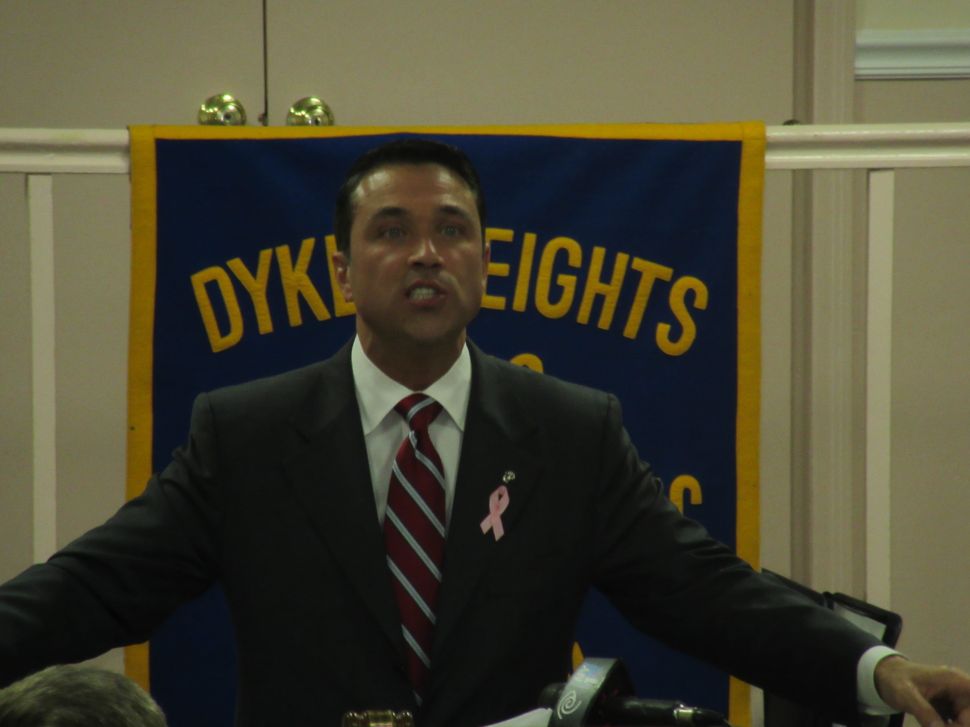