The rest of the week kicked off at Cipriani Wall Street, where Denise Rich hosted The Angel Ball, attracting the likes of Kris Jenner, Sofia Vergara and Blake Lively who watched performances by Alicia Keys and Nile Rodgers. Regrettably, all were as tight lipped as could be, meandering the venue like lost phantoms posing only for the cameras and declining our silly questions.

“We could get one each,” Ann Dexter Jones cooed as she stroked a pair of taxidermied albino peacocks up for auction, after Shindigger moved on uptown to The Plaza for the Arts Center Casita Maria’s gala.

“The home I sold in London before I moved to New York was in Holland Park, which is famous for peacocks roaming around freely,” she informed us as we enjoyed a glass of vin rouge at the black-tie cocktail. We assumed she meant the avian variety of course.

Speaking of roaming around, we asked her about ghosts: “Have you ever experienced a haunting?” Shindigger enquired.

“Yes,” Ms. Dexter Jones began dramatically, leaning in closer so we could smell her Tom Ford black orchid perfume. “Years ago in England when I went for the first time to a farm that my then-husband, Laurence Ronson, owned,” she paused eerily. “I had just arrived and was laying down to rest and when I tried to move, I couldn’t lift myself off the bed,” she recalled. “It turns out that someone had hung themselves many years ago in the attic.”

Shindigger’s evening got closer to the afterlife than expected when we popped into Cinema Society’s after-party for Mr. Dynamite: The Rise of James Brown at the Time Warner Center.

“Did you hear that Oscar de la Renta died tonight?” Andrew Saffir divulged to our disbelief. Hadn’t we just seen a frail but still regal glimpse of the fashion icon just a few days ago?

“He lived an amazing life,” another guest sighed as we calmed our nerves with a scotch on the rocks.

Issues of mortality were also omnipresent at the Skin Care Foundation’s gala where Shindigger learned of the horrors of melanoma. We needed healthy pours of malbec.

“These things usually make me terrified,” confessed emcee Taye Diggs toward the end of the Mandarin Oriental-soirée. Although the Broadway star and Murder in the First cast member wasn’t nursing his nerves with booze. “Once Sting hit the stage it loosened me up,” he said with a smile remarking on the surprise guest performance by the pop star.

It took until the weekend to finally score a truly disorderly celebration as RuPaul’s Drag Race star and 2012 winner, Sharon Needles, hosted a devilish slew of parties and events around town.

“I celebrate Halloween 365 days of year!” effused Ms. Needles to Shindigger after her biggest shindig, co-presented by Brandon Voss, which took place at Liberty Theater, and was entitled “Night of the Living Drag.”

“I love, love, love Halloween!” she cackled on. “I am the new and improved Elvira with an appetite for divine taste and gruesome fetish fantasies.”

Ms. Needles knows that the right amount of kink, booze and naughtiness can keep a fiesta going long past midnight. But it’s not ghosts that scare her: “The sight of another drag queen,” she giggled, was atop her lists of frights and scares. 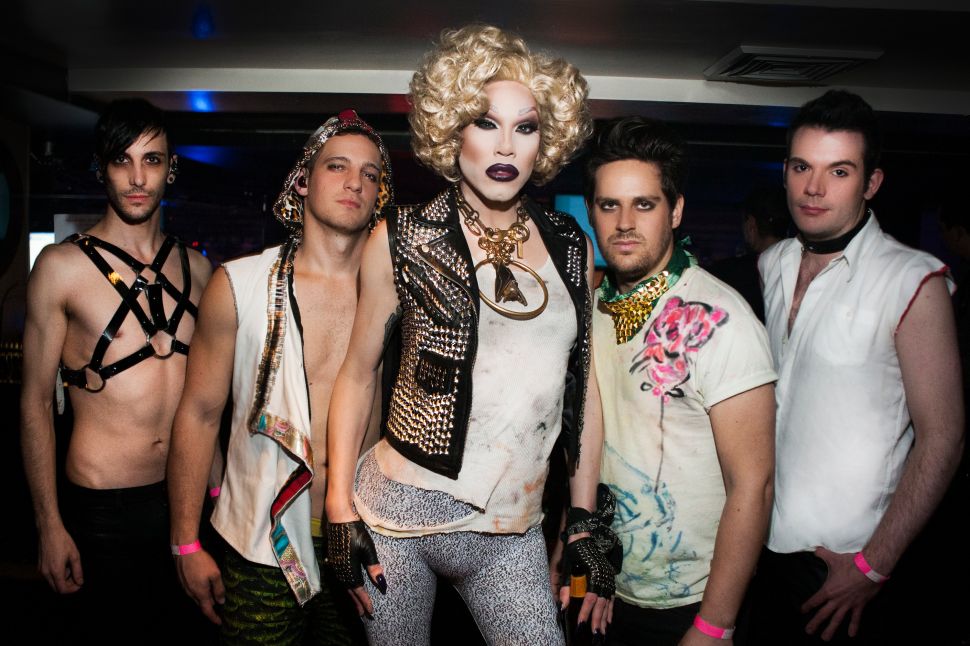