“Let’s not kid ourselves. We have not achieved equality,” Ms. Clinton told the crowd at the Grand Hyatt in Midtown during a Women’s Equality Party rally. “We have not yet seen the kind of progress on all of the issues that will ripple from this ballroom out to every woman and girl in New York and beyond.”

Ms. Clinton lauded the Women’s Equality Act and the new party, which Mr. Cuomo and his running mate, former Congresswoman Kathy Hochul, have been plugging in statewide bus tour. Ms. Clinton said until women are guaranteed equal pay for equal work, or are guaranteed the right to an abortion and birth control options, women would never be truly equal.

“Why… do we still act as if it’s 1955? Why do we think a 20th century economy is going to work for our 21st century families? The fact that women still get paid less than men for the same work costs them and their families thousands of dollars every year,” Ms. Clinton said.

Beyond the Women’s Equality Act, Ms. Clinton cited a need for a living wage and reliable childcare if women are to be able to enter and remain in the middle class. She spoke about her own experience as a mother, recalling a time when her daughter, Chelsea Clinton — who just gave birth to Ms. Clinton’s first granddaughter — woke up sick. Ms. Clinton said she had to be in court for a trial; her husband was out of town and her babysitter ill. Eventually, she found a trusted friend to watch Chelsea.

“I felt terrible that I had to leave my sick child at all. I called home at every break, and I rushed back to the house as soon as I could. And when I opened the door, I saw my friend reading to Chelsea, who was thankfully feeling better. And for the first time that day, my own head and stomach stopped aching,” Ms. Clinton said. “But think about that — for so many moms and dads, that ache is with them every single day. Our most vulnerable families have the least support.”

Ms. Clinton said it shouldn’t be that way — and that each generation ought to have it better than the one before.

“That’s why I am here today. I want you to know how much I believe in electing Andrew Cuomo and Kathy Hochul,” Ms. Clinton said. “They will fight for every woman and every family to have a fair shot. And here’s what they will never do: they will never waffle on a woman’s right to make her own reproductive choices. They will never shame and judge a woman for decisions that are complex and deeply personal, decisions that belong to a woman, her family, her faith, and her doctor. Not with her boss or with a politician.”

Mr. Cuomo picked up on that theme — attacking his opponent, GOP Westchester County Executive Rob Astorino, for saying he was opposed to a woman’s right to an abortion because of his religious beliefs.

“My opponent in this race says, ‘Well, my religion doesn’t recognize a woman’s right to choose. I said, I understand that. This is not about your religion. This is the law. This is civil rights,” Mr. Cuomo said.

Mr. Cuomo launched the party along with his running mate, Ms. Hochul, over the summer. Some viewed it as a cynical ploy to siphon votes from the Working Families Party, or to boost the ticket’s favorability with women amidst a primary run against Zephyr Teachout. And Mr. Astorino, has said the issue is a way for Mr. Cuomo to avoid discussing other things.

“People say a lot of things. I think it’s disrespectful to say the issue of choice is a boogeyman. No it’s not. If you’re a woman, it’s not,” Mr. Cuomo told reporters today.

Ms. Clinton also touted Mr. Cuomo’s record on gun control and passing legalizing gay marriage in New York State — something else Mr. Cuomo spoke about in his own speech, noting the state was a bit ahead of its time in 2011.

“When New York does it, it ripples all across the country, and all the United States say, ‘Well, New York can do it, can we do it here?” Mr. Cuomo asked, as Ms. Clinton rose from her seat to applaud. “And every politician was asked, ‘do you support marriage equality?’ And when we passed marriage equality, it was like dropping a pebble into the pond — it was like a ripple going across the country.”

Mr. Cuomo said politicians up to the president were forced to clarify their positions on gay marriage — and while he didn’t mention it, Ms. Clinton was one of them. Ms. Clinton did not express support for gay marriage until 2013.

Ms. Clinton and Mr. Cuomo, who live near one another in Westchester County, have occasionally marched together in parades — but this is the first time that Ms. Clinton has stumped for the governor at a campaign-style event.

There are plenty of ties between the Clintons and the Cuomos — Mr. Cuomo served as Secretary of Housing and Urban Development under President Bill Clinton and today called himself a “personal friend” of Mr/ Clinton, deeming Ms. Clinton “super.”

Mr. Cuomo is also considered a potential candidate for the 2016 Democratic presidential nomination — but Ms. Clinton is widely viewed as a lock for the nod, if she wants it. 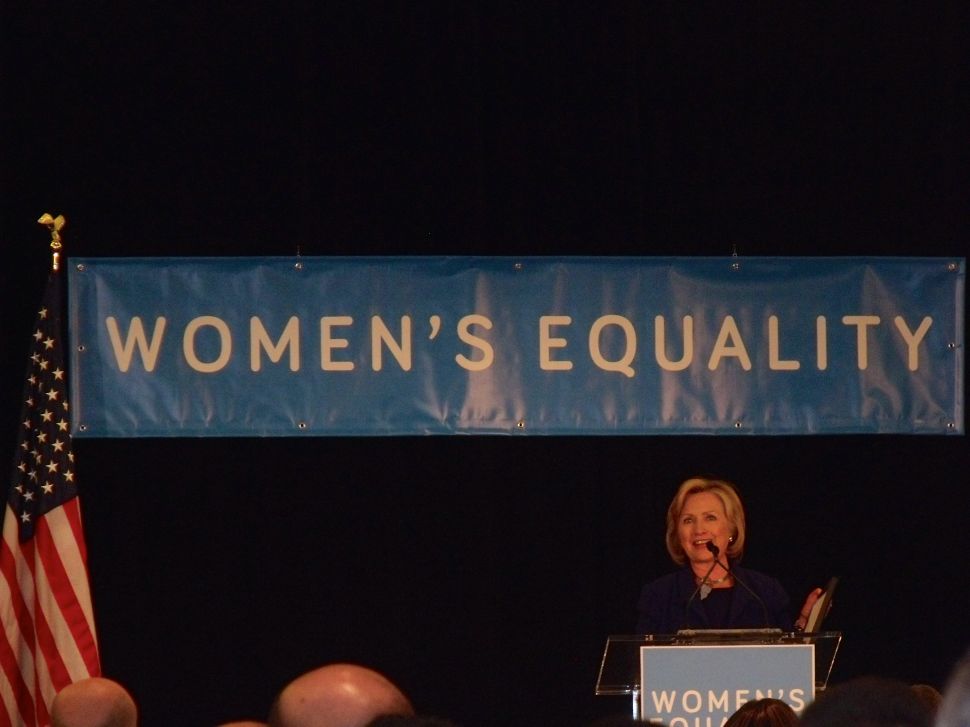