Between Quinn, Aayan, and Saul, Carrie keeps charming all the boys.

Oh great, the opening credits are back with same jazz music but new images and sound clips. Not a huge deal but I prefer the black screen, title, let’s-get-down-to-business-method of the premiere episodes. Still, 4×3 doesn’t fudge around with anything boring. There is some love drama that could potentially ruin the whole season but first let’s get to the goings on in Islamabad.

Carrie has finally gotten away from that crying baby whom she gave birth to, yo. Now she can figure out what happened to Sandy. It’s a little awkward over at the embassy since Redmond aka Danny Noonan (Caddyshack) was given the station chief gig, then was un-given it by Lockhart. Never trust Lockheart, Noonan. He’s like Judge Smails. Those will be all the Caddyshack references I will make for the rest of this season or at least the next two weeks. I don’t want to over-promise. Anyway, Redmond losing his job to Carrie means he’s going to be a problem. The ambassador isn’t helping either. She doesn’t trust Carrie and she shouldn’t.

The first chance she gets, Carrie leaves the embassy, ditches her security detail and loses the ISI agents who were tailing her. That’s the only way Carrie can meet up with the secret team that she’s brought in. Fara and Max have set up an office and are planning to get info out of Aayan by convincing him that they are British reporters who want to help him. Aayan is the guy survived the wedding drone strike. It’s going to be very difficult to get him to talk because Aayan’s very scared of those guys who broke into dorm room and threatened him. Carrie basically tells Fara to flirt with Aayan to get another meeting from him. Later Carrie ends up showing Fara how it’s done, much better than her failed flirtatious arm grabs. When Carrie lures Aayan into the public bathroom by pretending to be in need of medical attention, she promises him a lot of things that no newspaper could deliver. Can The Daily Mail place somebody into the Royal College of Physicians? The CIA probably can’t do that. I’m not even sure what Aayan can do for the CIA. This seems like a lot of trouble to go through just for him. Try as he might, Aayan will not be able to overcome Carrie’s bathroom seduction. After he ran out of there, Aayan started thinking, “She kind of liked me, I think I have a shot.” Poor Aayan never had a chance.

Quinn wants out of the CIA…again. He probably would have left the first time if the exit interview wasn’t such a hassle. Before he can be released from the CIA Quinn has to be determined mentally stable not to go around snapping necks in diners or blabbing about all his killings to Montel Williams (that’s where I’d go). Dar Adal watches this interview from behind through a two-way mirror. The woman analyzing Quinn wants to push him to the edge so she goes for the, “I know what girl you like” move. It works. When the question of a romantic relationship with Carrie is brought up, Quinn takes off to go back to binge drinking.

Was I blind this whole time to Quinn’s big crush on Carrie? Quinn seems like he’s killed too many people to play the Duckie in a relationship. Plus he’s still having sex with that apartment complex manager who still has not been named. She sure is sweet on Quinn. She even thinks he’s cute when he’s drinking himself to death.

Dar Adal also brings up the Carrie thing when he stops by Quinn’s place to check on him. He takes it a step further and says that Sandy died because Quinn was too worried about Carrie. Is that what he really thinks or does Dar just want one last choke-hold from his protégé? One choke-hold, coming up. By Dar’s reaction, it’s still not clear whether or not Quinn is out of the CIA. Quinn doesn’t think so because next he agrees to go to Pakistan to work with Carrie to find out who set up Sandy and them.

Another guy with a Carrie crush, Saul, is still around helping out. He didn’t need to show up in Pakistan with a security team but he did. It might not have been just for Carrie either though. His relationship with the ambassador might help him get back into the CIA. Dar told Saul that the State Department could be Saul’s way back in. There’s no way Saul isn’t going to be running the CIA in four episodes. If Saul is running the CIA, that would be huge for Carrie because Saul’s relationship with Ambassador Boyd will be very beneficial. Saul was able to get the embassy lockdown lifted and a second chance for Carrie even without any official power.

Are you happy, Dar Adal? Quinn is single again. It’s probably the visit from Dar that caused Quinn to break it off with his lady. Either Quinn’s afraid the CIA is going to hurt her or he’s in love with Carrie…or he really just doesn’t know the apartment manager’s name. Possibly a little of all three, but Quinn kicks her out for trying to clean up the place a little, thus ending the whirlwind drunken romance of Quinn and what’s-her-face.

Does the fact that Quinn agreed to go to Pakistan to help Carrie mean that those two are going to end up together? I hope not. This season’s first three episodes have been really good and a love story could ruin it, unless Quinn gets back together with that enabling codependent apartment manager. I like her.

In love or not, Quinn is not ready to be back in the action. He’s too traumatized to be in Pakistan. If his drinking and violent outbursts continue at the embassy it will get messy. Let’s just hope there’s no love story between Carrie and anybody on the horizon. You just got out of a thing that ended with a public hanging, Carrie. Maybe take a season off to just get to know Carrie. 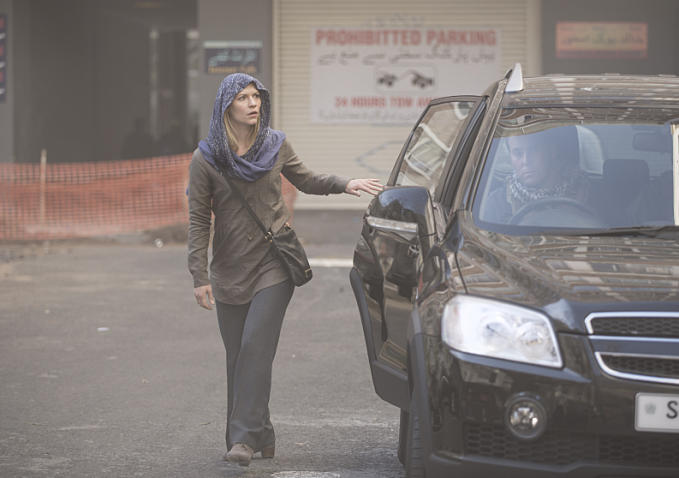