All new Homeland y’all. This ain’t your dad’s Homeland. The weird opening credit sequence with 9/11 footage and Louis Armstrong is gone. Now there’s just a minimalist black screen with the show title in white letters. This is how this show has changed. All the clunky bullshit of the old Homeland is gone.

No more Brody and more importantly, no more Brody family. I just got done recapping Ray Donovan. I do not need another annoying family with kids who can’t act and a one-dimensional wife character who makes me feel bad for her in-theory-way-worse of-a-person husband. Enough of me talking about last season. This is the new joint and it rivals The Strain for my favorite thing to watch right now.

Speaking of The Strain, Cory Stoll shows up in the season premiere just to prove that we are indeed watching a good show. I was really hoping that Cory, who plays Sandy the Station Chief in Islamabad, was going to become a regular character but he gets stomped to death. He was also trading top secret government intel for the location of high priority targets but I’m getting ahead of myself.

Let’s start from the beginning. Last we left Carrie and the gang, Brody was hanged, Saul was assed out of the Agency but back together with his wife, Mira, and Quinn was a reluctant bad-ass who has seen too much death. Lockhart took over the CIA and Carrie was guilted into keeping her baby by her Dad and sister. She was also moving to Istanbul to be the Station Chief.

Episode 4×1 starts with a drone strike. In seasons 1-3 a drone strike that killed young Issa helped Abu Nazir turn Nicholas Brody against America. Now, in season 4, a drone strike ordered by Carrie and based on bad intel provided by Sandy blows up terrorist Haissam Haqqani and a wedding party. Also, Carrie is in Kabul, not Istanbul. Working in Afghanistan means more action but also no babies allowed. Baby Brody stays back in the USA where she’s taken care of by Carrie’s sister, Maggie.

After his identity as a CIA agent gets leaked to the press in Pakistan Sandy gets killed in the street. It looks like this season or at least a chunk of it will focus on Carrie unraveling the mystery left behind by Sandy’s death and dealing with the ramifications of all the civilian deaths caused by her drone strike. Already, she finds out that Sandy had been giving his informant top secret info in exchange for the really good intel that has recently helped the CIA locate important targets they’d struggled to find in the past. Lockhart helped cover this up in order to keep getting the praise over the CIA killing so many high value targets.

These first two episodes suggest that Carrie, Saul and Quinn are now the heart of the show. Lockhart is important but he’s an obstacle more than someone to care about. He also looks like he could be written out of the show in a few weeks if Saul pulls a Leno and comes back.

The writers are definitely setting things up for Saul to come back to the CIA but I think it’s going to cost him his reconciled marriage.

Too bad Carrie won’t just break down and bang Saul. I never buy into that platonic, “she’s like my daughter” mentor bullshit. Saul wants to have sex with Carrie but let’s leave that for the fan fiction. Anyway, there’s some sexual tension there and Mira knows it. Even if Saul doesn’t end up back as CIA Director, Carrie has brought Saul back into her life by hiring his security company to help out in Islamabad.

The starting episodes suggest that Carrie has no feelings left. She feels no guilt over the fact that she ordered the drone strike that blew up a wedding. Seeing Sandy beaten to death didn’t really phase her. She is not happy to be a mother and seems indifferent to her daughter Frannie when she finally does get to see her. Carrie makes sure to stay away from the kid altogether. One day of diaper changing and Carrie is blackmailing Lockhart to send her to Islamabad. It’s really for the best because when Carrie entertained the idea of drowning Frannie in that frightening bathing scene, she held the kid’s head under for a 4 count.

It’s hard to say what it is about Frannie that upsets Carrie the most. First, the lil redheaded baby is a constant reminder of Brody. Second, Carrie is worried that her mental health could make her an unfit mother. Third, the kid gets in the way of her career. Yeah, Carrie kind of hates the baby. Carrie’s sister is pissed to be stuck with all the baby responsibility, but tough shit. If she had let Carrie give the baby up this wouldn’t even be an issue. Sorry, sis. Carrie’s got to save America so you’ll have to watch this baby whom you so badly wanted Carrie not to give away.

I’m ok with the baby part of the story if we don’t see the kid again. The day Carrie spends with the baby was painful and frightening, and really interesting, but enough about the baby.

It looks like Quinn is done with the CIA. He’s struggled with justifying the CIA’s evil actions. Having to shoot his and Carrie’s way out of an angry mob after they beat Sandy to death sends Quinn over the edge. His binge drinking and violent outbursts, while fun to watch, are making it look like he can’t take anymore death. After Sandy’s funeral, he even tells Carrie that he’s not going back.

At least he’s still a gentleman. The morning after drunkenly having sex with the rather large woman that manages his apartment complex, Quinn buys breakfast. Always offer some eggs. It’s the right thing to do. It was also the gentlemanly way, when Quinn confronted those douches in the diner who were making fat jokes at the woman’s expense, but even he knew it was a bit much when he was about to smash the napkin holder into the guy’s bloody face.

Looks like somebody’s got a girlfriend. The manager is real sweet on Quinn and he seems to enjoy spending time with someone who hasn’t killed anyone ever. “Enjoy” is a strong word since the man is traumatized and constantly drunk. Also, Quinn might not really know her name. I know I don’t.

There’s that other storyline too, with Aayan Ibrahim, the nephew of Haissam Haqqani who survived the wedding drone strike. The big questions here are what’s up with the vaccines Aayan’s hiding and who are those guys who break into his dorm to threaten him to keep his mouth shut? There’s got to be a lot more here but it will probably come out when he crosses paths with Carrie.

Episode 4×2 ends with Carrie on a plane back to Islamabad. People can judge Carrie for leaving her child to go to Pakistan but taking responsibility for her child would make for an extremely boring show. If you want some mother/daughter story, watch reruns of Gilmore Girls. 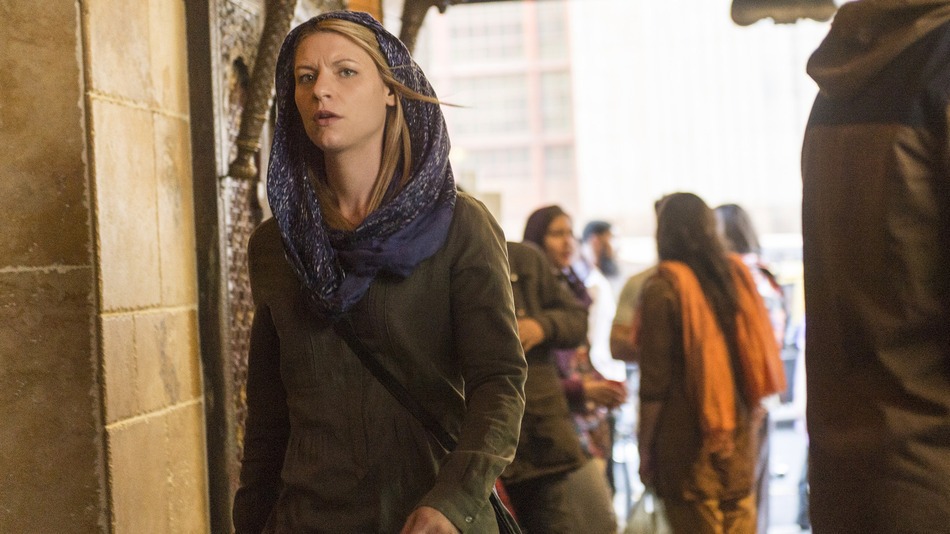