Since the affordable housing lottery for Hunter’s Point South, a two-tower development in Long Island City, launched on October 15, approximately 25,000 people have applied, according to Councilman Jimmy Van Bramer. Ultimately, the development will house some 925 low- and moderate-income families, a significant number, but far below the evident demand in the area. 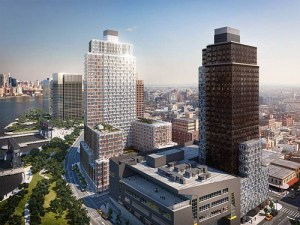 All of which brings the the recent debate over Astoria Cove, the mixed-use development project along the Astoria waterfront, into sharper relief. Demand for affordable housing in Western Queens is, as the early onslaught of Hunter’s Point South applications highlights, extraordinary. The dilemma posed by Astoria Cove is whether or not the city should concede that some—20 percent—is better than none, or push for a higher percentage.

The project, which won the approval of the City Planning Commission in late September, would be a test case for the de Blasio administration’s mandatory inclusionary zoning plan—earlier this year developer Alma Realty raised its hand for the program amidst a firestorm of criticism over a lack of affordability at the development. In doing so, they agreed to provide 20 percent affordability—sans city subsidies—for the right to build bigger than zoning at the site allowed. It’s a deal that deputy mayor Alicia Glen has suggested would be  a model for all such projects going forward, with subsidies reserved for projects with greater affordability or development challenges.

Many have also questioned the affordability of some of the affordable apartments, particularly in the context of Western Queens, with “affordable” one-bedrooms listed for as much as $2,700 per month. There are also concerns about whether the development will drive area prices up, far overwhelming the impact of building 340 units of affordable housing.

But in a recent phone interview, Councilmember Van Bramer, while refusing to comment on Astoria Cove directly, told the Observer that he believes Western Queens can both “increase affordable housing and keep [the] neighborhoods the desirable and comfortable places that they are.”

He pointed to the success of Hunter’s Point South and the huge number of applications—which he estimated would be near 100,000 by the time the process closes on December 15—as an indication that the city is working toward its affordable housing goals; this first phase of the project, however, will not count toward the 200,000 units of affordable housing that Mayor Bill de Blasio has committed to building over the next 10 years because the financing for those units closed under Bloomberg, according to the Department of Housing Preservation and Development.

“The mayor has an ambitious plan. We support that plan,” Mr. Van Bramer told the Observer.

The Hunter’s Point South complex, developed by Related Companies, Phipps Houses, and Monadnock Development and designed by SHoP Architects, has an already-completed waterfront park and will include retail space, a grocery store and a new school when it is finished. Mr. Van Bramer, who has been working on the park since he was on the Land Use Committee in 2006, attributes the broad range to the community’s strong involvement in the project’s planning and design.

“When we can exert our influence, we should. The people should understand this is important to us. Affordable housing should be a part of every project coming down the line,” he said. “The sweet spot on affordability is always different in different communities.”

Correction: An earlier version of the story said that units in the first phase of the Hunter’s Point South project would count toward Mayor Bill de Blasio’s 200,000-unit affordable housing goal. However, those units were counted by the Bloomberg administration because of the time in which the financing closed. The Observer regrets the error. 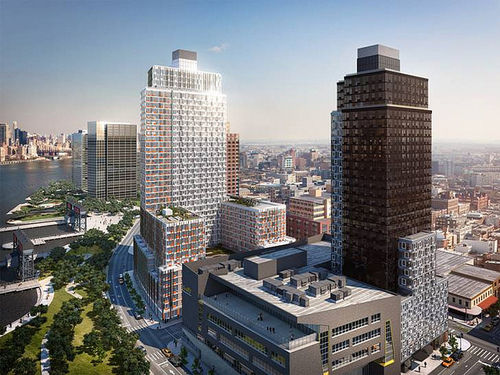