He can’t even beat a “boy-breaking” congressman?

That’s the question Daily Show host Jon Stewart had last night for Domenic Recchia Jr., the Democrat taking on indicted Republican Congressman Michael Grimm. Mr. Stewart took time to skewer Mr. Grimm, who threatened to throw a NY1 reporter off a balcony, but saved his fire for the little-known Mr. Recchia, savaging the former councilman for a series of verbal flubs that have haunted him on the campaign trail.

Mr. Stewart’s segment on the race was dubbed: “Wait, How the F@#k Does That Happen?”

“If the seat wasn’t already Recchia’s for the asking, he also massively out fund-raised Grimm over the summer. So it was no surprise that in the most recent polling, Recchia was losing to the 20-count indictment, boy-breaking Grimm by four points!” Mr. Stewart said.

Mr. Stewart than played a clip of Mr. Recchia at an endorsement event with Senator Charles Schumer explaining that his “great” foreign policy expertise derived from running a student exchange program.

“It’s not a good sign when even Chuck Schumer does not want to be on camera with you,” Mr. Stewart said. “Chuck Schumer. That’s a man who seeks out little red recording lights like a sunflower growing towards the sun.”

“What, no, what are you talking about, labor, the labor place with the percents that they rate you,” Mr. Stewart imitated Mr. Recchia.

“So the Democrats are blowing this,” he added, dropping the Brooklyn accent.

Mr. Stewart underscored his grim view of the race for the 11th Congressional District at the close of the segment.

“Either way, I think we think can agree the real winner here is New York’s 11th, because whatever happens between now and November, one of these two gentleman is going to be representing you in Congress,” Mr. Stewart said, stifling a laugh.

View the full segment below: 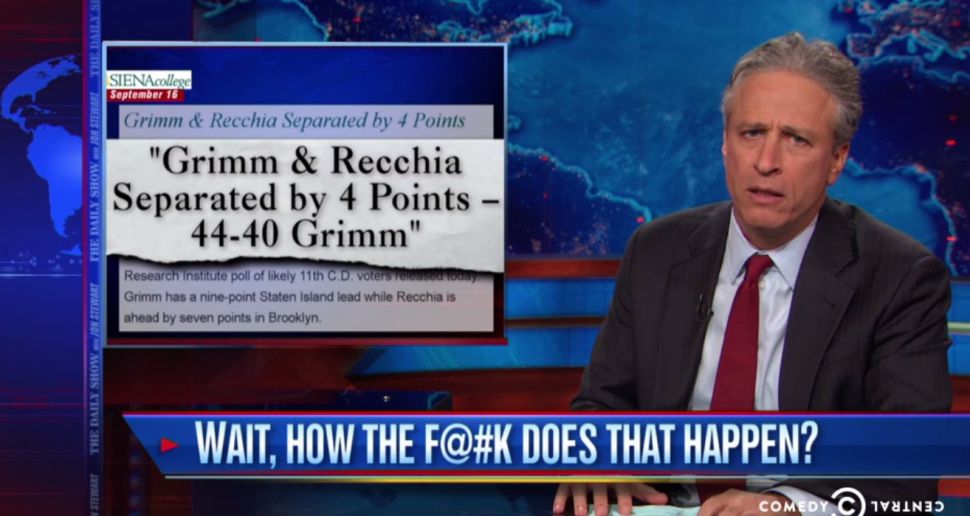