Recently though, sprinkled in between legitimate crowdfunding attempts are more and more joke projects and flat out ridiculous campaigns.

They vary greatly with users crowdfunding everything from straight up gags to pointless projects and personal purchases of enormous magnitude. None of them are seeing much success at all.

It  seems that even incredibly personal fundraising campaigns — which was once reserved for GoFundMe — have made it’s way to Kickstarter. This guy is currently looking to raise $1,000 to buy his girlfriend 1) a new TV, 2) a shopping spree or 3) an iPhone 6, yet he’s claiming that “this is in no way charity.” Another bizarrely personal campaign for a women seeking $350,000 so she can buy a house was recently suspended. It seems safe to say that the aforementioned campaigns are hosted not by pranksters, but by individuals who are confused about what constitutes something people might actually want to back.

Pledge $50 if you want one of these (Kickstarter)

A man from the Netherlands is crowdfunding so he can draw the ( ͡° ͜ʖ ͡°) face on memo notes and cover a carpet with them. More specifically, he’s looking for supplies, like memo notes, black permanent markers, glue and gloves to prevent paper cuts (obviously necessary).

Next up in the “need permanent markers” category is this Kickstarter campaign that’s looking to raise a whopping $5,000 to make more hair bows that are literally just pieces of ribbon covered in Sharpie-drawn polka dots. It’s raised no money so far, and that’s probably because the lowest backer level is $20, for which the reward is an “honorable mention.”

These will help you dance, apparently. (Indiegogo)

Currently on Indiegogo is a campaign titled,”Dancing Shoes to Help White People Dance!” These shoes are actually just bricks that will “prevent white people from just jumping up and down and calling it ‘dancing,'” according to the page. Obviously, this gag hasn’t come close to reaching its $1,000 goal, and something tells us the makers don’t have the production means to actually make these uh, shoes.

While we’re sure there were mock campaigns prior to the famous Potato Salad event of summer 2014, it’s clearly inspired a new onslaught of gags to crowdfunding sites. The viral campaign surpassed its $10 goal by more than $55,000, garnered national attention from major news outlets, and undoubtedly put the idea of less legitimate campaigns on the map.

We can’t all make bank on a nothing idea like Potato Salad Guy (who’s so Internet famous he hosted an official Reddit AMA on Monday), but a lot of people are trying.  A number of parody campaigns have popped up. Currently, one man on Kickstarter is hoping to raise $10 to make hummus. 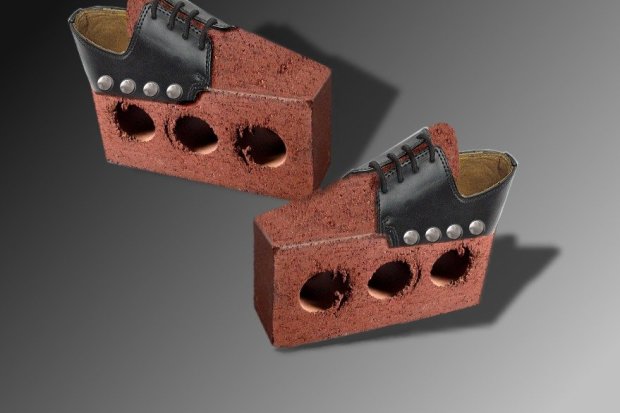