Louisiana Gov. Bobby Jindal, one of the many Republicans believed to be mulling a presidential bid, swooped into Manhattan today to bolster Rob Astorino’s long-shot campaign against Gov. Andrew Cuomo.

Mr. Jindal was here despite the decision of New Jersey Gov. Chris Christie, the chair of the Republican Governors Association, to not support Mr. Astorino against Mr. Cuomo, a Democrat who remains a close ally of the New York governor’s.

“Chris is perfectly capable of speaking for himself. I’m here because I’ve been a long-time supporter of Rob’s. I know he’s going to do a great job as governor,” Mr. Jindal told the Observer in response to a question concerning Mr. Christie’s lack of interest in aiding Mr. Astorino.

A conservative star nationally, Mr. Jindal is also fund-raising for Mr. Astorino. The Westchester county executive still trails Mr. Cuomo in the polls and has far less cash in his campaign war chest. Texas Gov. Rick Perry, another right-wing heavyweight, recently fund-raised for Mr. Astorino, and State Democrats have used the appearances of both governors to argue that Mr. Astorino is too far out of the political mainstream to be taken seriously.

More moderate Republicans, like Mr. Christie and State Senator Dean Skelos, the body’s co-majority leader, have been cool to Mr. Astorino’s unflagging brand of conservatism and his unlikelihood of defeating Mr. Cuomo. But Mr. Jindal–who took time at the Grand Central Station press conference to attack Mr. Cuomo and President Barack Obama’s handling of the Ebola crisis and Common Core–appeared convinced Mr. Astorino could pull off the upset.

“I think that New York is headed in the wrong direction. You see hundreds of thousands of people leaving the state. You’ve got an economy not growing as quickly as it could,” Mr. Jindal said. “You see many shortcomings and I think Rob will do a much better job, that’s why I’m here to support him.” 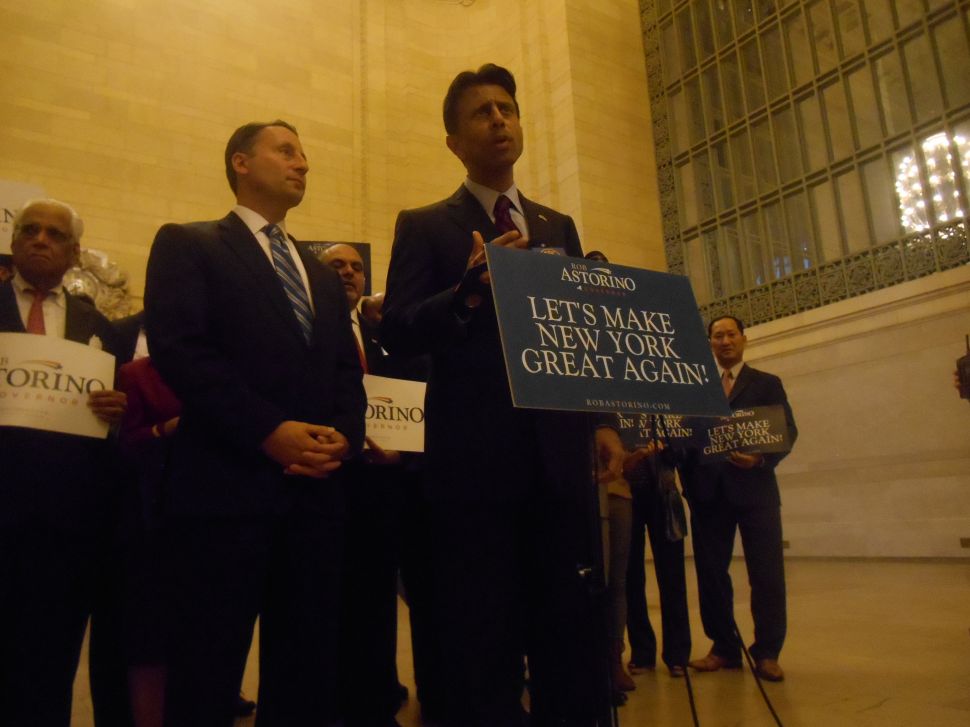