Like a court case that ends in unanimous conquest for the defendant, The Judge is a perfect movie—provocatively written, intensely mounted, painstakingly photographed, passionately acted and profoundly thoughtful. Equal parts courtroom drama, legal thriller and family saga, it’s also a synchronized duet for two terrific actors at the top of their craft that left me stunned.

Looking healthier and handsomer than ever, Robert Downey Jr. plays Hank Palmer, an arrogant, cynical Chicago defense attorney who returns home to a small town in Indiana for his mother’s funeral and stays just long enough to open old scar tissues and rekindle old conflicts with his estranged father (Robert Duvall), an irascible local judge and pillar of the community whose implacable values and judgmental dynamics have kept his three sons divided and in turmoil for years. Vincent D’Onofrio, as the resentful older brother Glen who never left home, and Jeremy Strong, as the mentally impaired youngest brother Dale, both cower under the domineering control of their father, known to everyone simply as “The Judge,” but Hank clashes openly with the old man. Neither of them has a talent for saying what they really feel, and it is obvious that they will never reconcile.

Hank is about to fly home when a shocking crisis erupts. The Judge is accused of the hit-and-run killing of a man he once sentenced to prison, suspended from the bench and tried in the same courtroom where he’s been dispensing justice for decades. Under the circumstances, Hank is forced reluctantly to take over the job of defense attorney in the resulting murder trial with his own father as a client—an awkward position that pits him against a crafty out-of-town prosecutor played by Billy Bob Thornton. It’s a tough case that uncovers damning evidence, and Hank’s father is no help at all. “Imagine a far away place where people value your opinion,” he says to his son, who is now also his lawyer, “and go there!”

Watching helplessly while the wheels of law drag on, the trial Hank thought would be a no-brainer heads in the wrong direction, his father’s health fails, and he develops a gradual compassion for The Judge’s predicament. Mr. Duvall’s bravery and honesty as a method actor of unusual grace pays off constantly. An intimate scene where the son washes his father’s wrinkled and sagging frame and tends to his bodily functions is especially affecting. Mr. Downey matches him without pause.

Sensitively directed by David Dobkin, the screenplay by Nick Schenk and Bill Dubuque is intelligent, touching and carefully calibrated, eschewing any trace of sentimentality, yet the film envelops your own sense of humanity as father and son draw closer and discover things about each other they never suspected. Beautifully lensed by the great Polish cinematographer Janusz Kaminski (Saving Private Ryan, Schindler’s List), every shot is suitable for framing, and the film is enhanced by a smashing cast, including a small but sincere contribution by a bottle-blonde Vera Farmiga as an old girlfriend of Mr. Downey’s. It’s Mr. Duvall’s greatest performance since he won the Oscar for Tender Mercies, and Mr. Downey’s greatest performance ever. The actors are so powerful and explicit with truth they kept me glued to the screen with awe.

The Judge is what they mean when they say they don’t make ’em like that anymore. 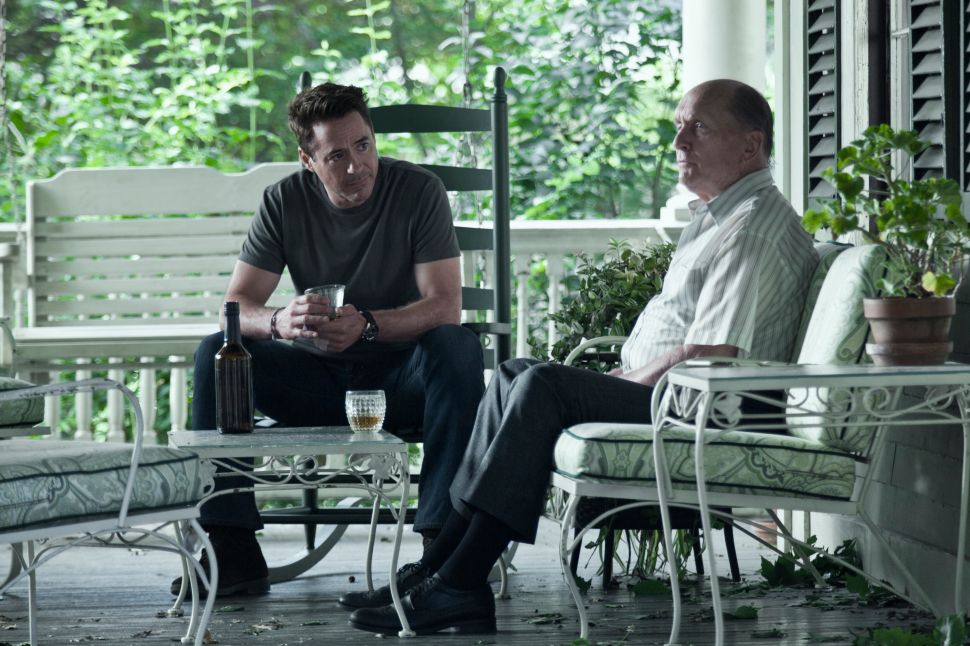