On a recent afternoon, the directors of a small Contemporary art gallery were reviewing the list of dealers participating in the art fair Independent Projects, which opens to the public on November 7. Independent, the somewhat alternative four-year-old fair has historically featured galleries devoted to emerging and early-mid-career artists, and the dealers were predicting the usual scruffy suspects. Sure enough, there were the young ventures … but then came names they weren’t expecting: blue-chip behemoths like David Zwirner, major galleries such as Mitchell-Innes & Nash, Skarstedt, Gladstone and … wait … late-game addition Larry Gagosian? This clearly wasn’t Kansas as they knew it. “What are we doing on here?” said one incredulous director.

Has Hollywood come to Sundance?

Matthew Higgs, Independent’s creative advisor, said the fair isn’t selling out to the big-box galleries, far from it. Rather, the goal is to create a mix of dealers and art one rarely sees at art fairs.

“One of the things that I think happens at art fairs is that all the young galleries tend to be corralled in one area over there, the blue-chip or secondary market dealers tend to be downstairs or corralled over there, and there seem to be these zones,” said Mr. Higgs. Independent is “trying to eliminate that … Everyone’s exhibiting alongside one another, so we’re not creating any of the typical hierarchies.”

When Independent debuted in March 2010, it was pretty much cool overnight. Founded by Chelsea dealer Elizabeth Dee and London dealer Darren Flook, the fair was branded as something wholly new, offering an alternative to the boxy trade fair booths of more established fairs, (Which can feel, as the Hermès-clad crowd presses down the long aisles, like being stuck on an airport moving sidewalk.) At Independent, visitors freely wander booth-free floors. Right angles are a rarity. Boundaries between where one presentation ends and the next begins are blurred.

The work is different, too. At the most recent Independent fair, in March, fairgoers dodged torrents of sawdust and chunks of flying wood as a woman used a chainsaw to dismember a wooden effigy of the artist John Bock (who had conceived the performance). Things like that rarely happen at the other fairs.

So, the incursion of some of the world’s most established and successful art dealers in the fair’s first autumn edition (it usually takes place in March) has been met with raised eyebrows.

“I think it will kill the magic of Independent,” said one gallery owner. A sense of camaraderie amongst the dealers has always characterized Independent, he said, and the addition of competitive big-business galleries could compromise the collegial atmosphere.

But there’s some sound business and strategic reasons to include the big-business galleries this fall. “The timing is very different,” said Laura Mitterand, director of the fair. “There’s no other art fair happening in New York at that time, what is happening are the auctions.” (Sotheby’s, Christie’s and Phillips hold multi-million-dollar sales of Impressionist, Modern and Contemporary art the first two weeks of November.) So inviting some more established galleries to join, given their existing relationships with the collectors in town for the million-dollar auctions, “made sense.”

Participation costs for Independent in November are higher than for the March version (which will retain its alternative character and upstart cast next year, organizers insist). The dealers presenting in Projects will pay $15,000-$25,000 for their spaces, while the 2014 spring edition cost galleries $8,000-$18,000.

Even with a strong collector base in town for the sales, New York-based galleries need a good reason to participate in fairs in their own city, according to Lucy Mitchell-Innes, whose gallery has branches uptown and in Chelsea. Or, given the toll fairs take on galleries, a good reason to do another one anywhere. “It’s lamentable. It’s physically exhausting, it’s extremely expensive, it’s a risk—but the art world is increasingly event-driven,” said Ms. Mitchell-Innes.

And this will be an event indeed. The 40 participating galleries, which hail from the U.S., South America and Europe, are all curating single-artist presentations. That’s unusual in and of itself, but three days into Independent’s run at 548 West 22nd Street, dealers will be replaced by docents, the sales will stop and the fair will transform into a show.

According to some of the more established dealers, it was the novelty of this exhibition model—a significant break with current practice—that convinced them to participate. “We do a lot of art fairs, and we’re invited to other art fairs that we don’t participate in,” said Branwen Jones, a director at David Zwirner, which will present new work by Raymond Pettibon. “But this felt like a really new format that made it feel worthwhile to add it to our roster.”

Said Mr. Higgs: “The thing that was always important to the Independent was to try and create a platform that artists were interested in showing their work at, because I think there’s always this idea that the art fair is a kind of necessary evil.”

In Ms. Mitchell-Innes’ case, showing at Independent was a chance for artist Virginia Overton, who frequently makes site-specific installations, to create new work in a new space. “Really in this case, it was because of the way Virginia works that we wanted to do this,” said Ms. Mitchell-Innes.

Artist Liam Gillick says he tends to avoid art fairs,  but that he’ll be visiting this one to watch viewers interact with a large installation he’s presenting through the Maureen Paley Gallery. Mr. Gillick has been working with the Independent team to create a space within a space: a 25-foot mirrored corridor that visitors can enter to watch his film exploring the work of artist Richard Hamilton.

“The experience has been very much like working in a really good kunsthalle or institution or place like the I.C.A. in Philadelphia, where the focus is always on the work,” said Mr. Gillick. “And to me that’s kind of surprising.” He added: “I realized I’d never been in an art fair meeting before where things get decided. That’s kind of unique, because the artists are always on the outside of these fairs.” 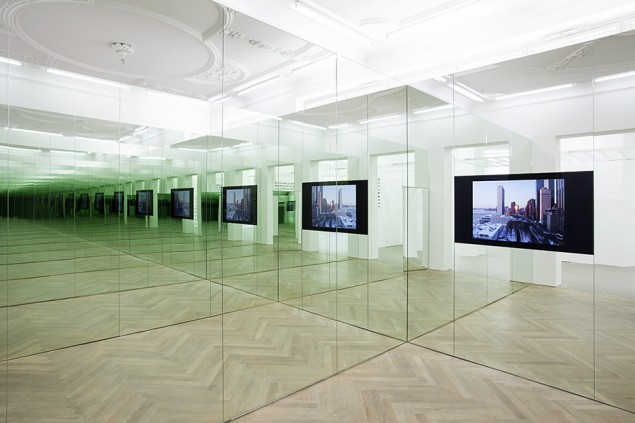