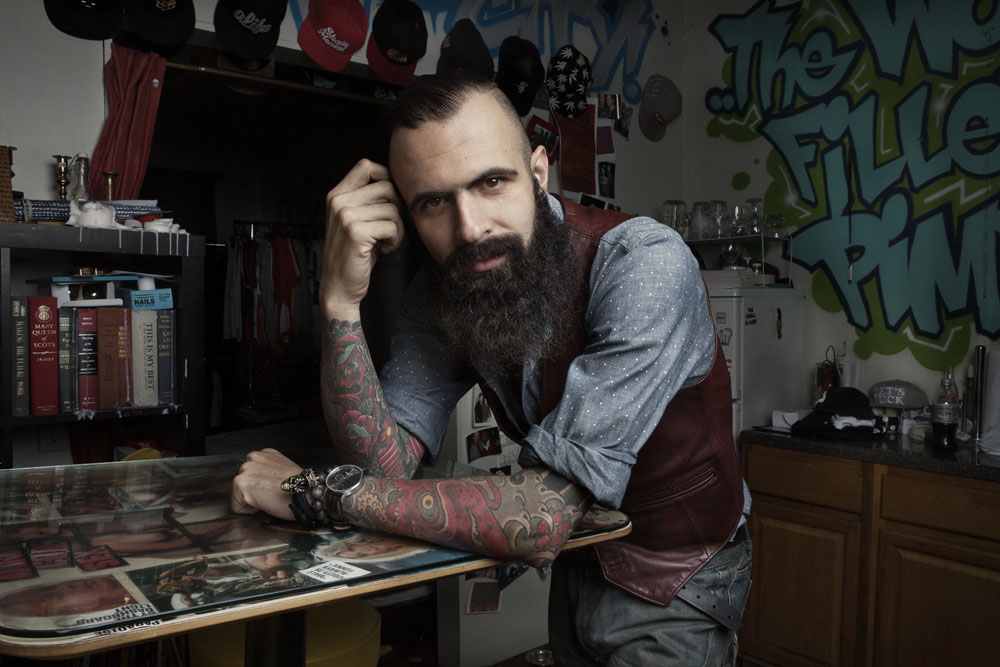 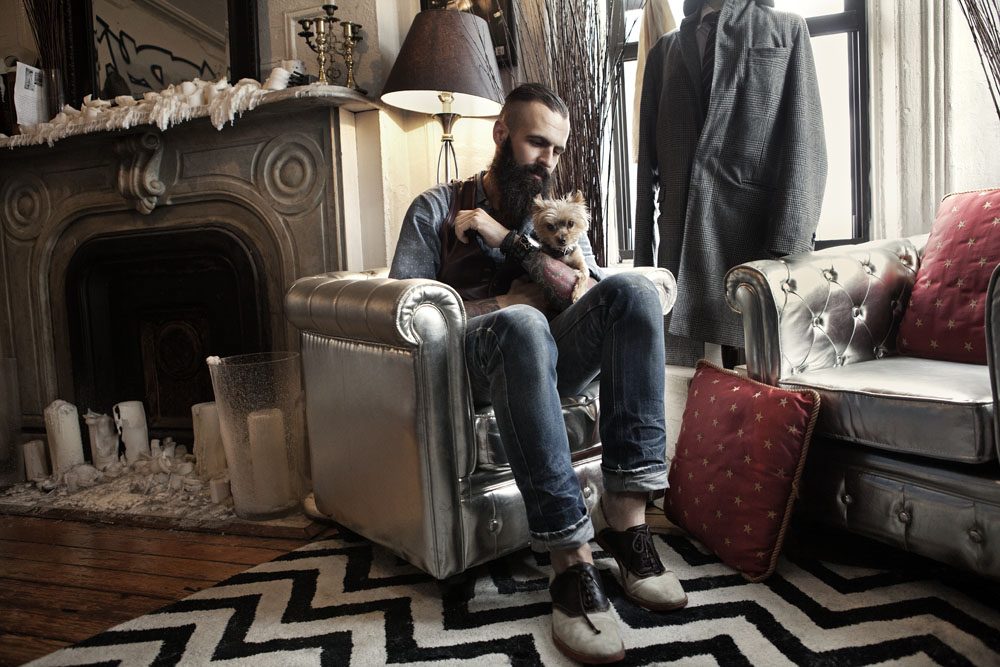 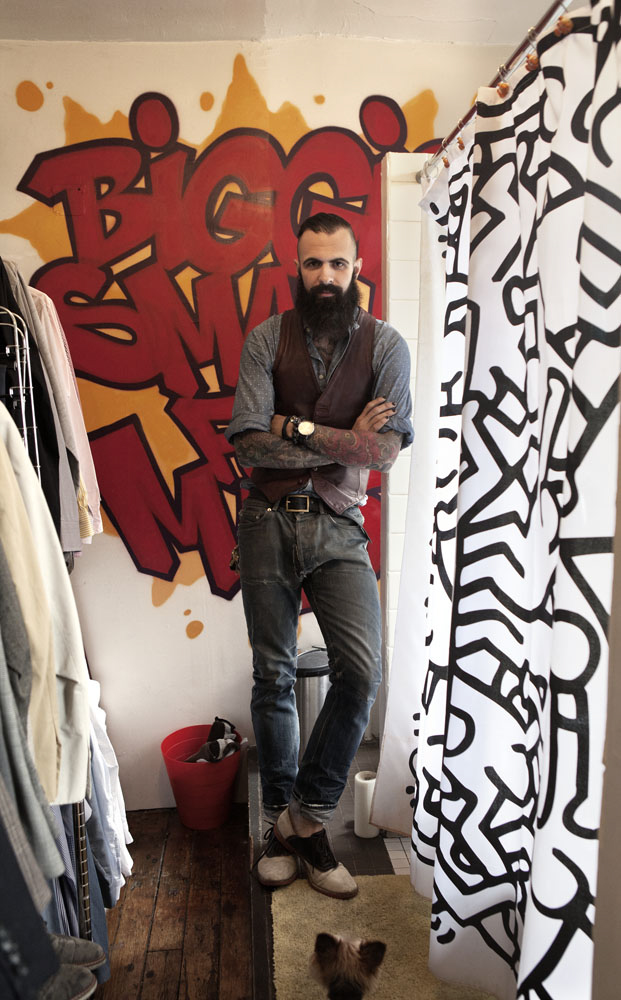 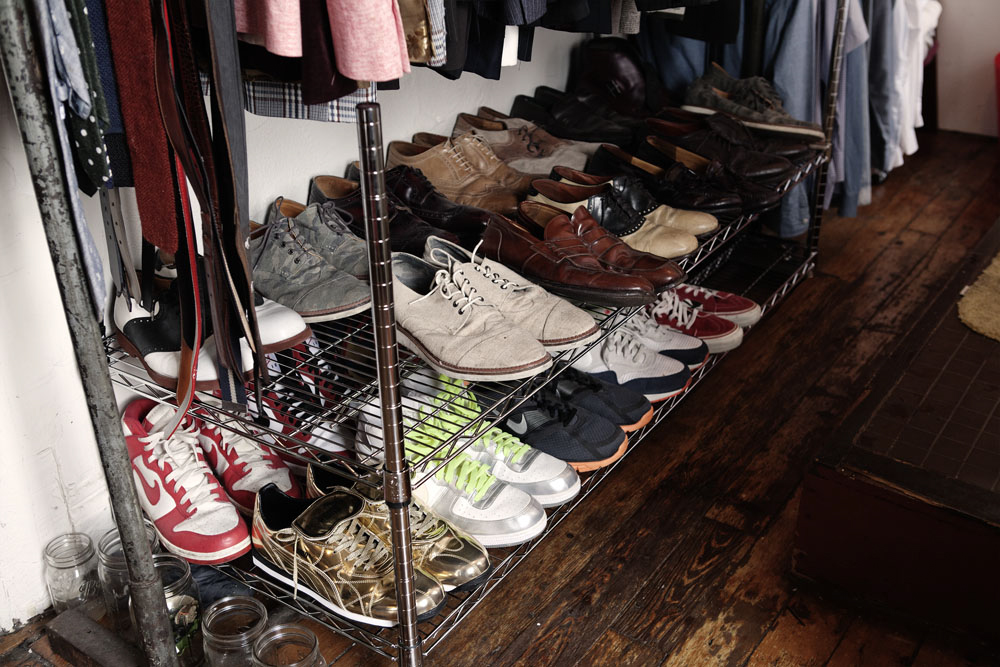 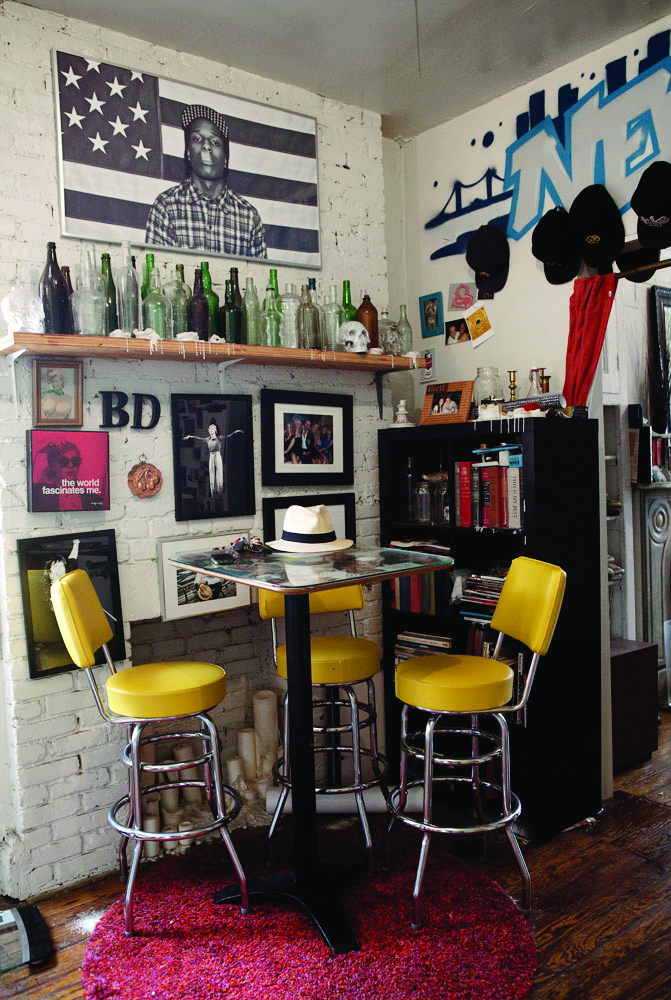 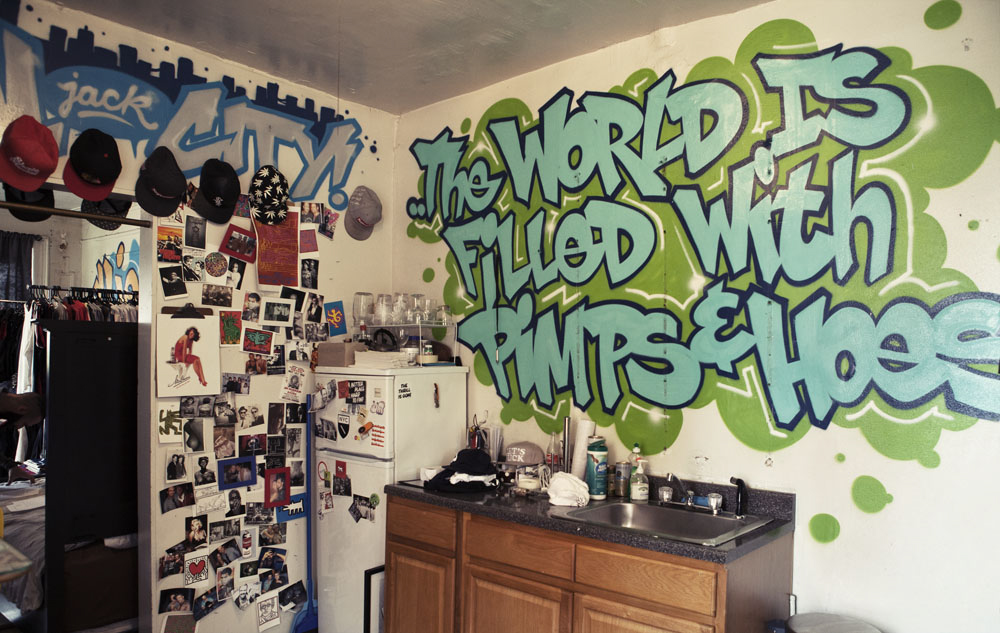 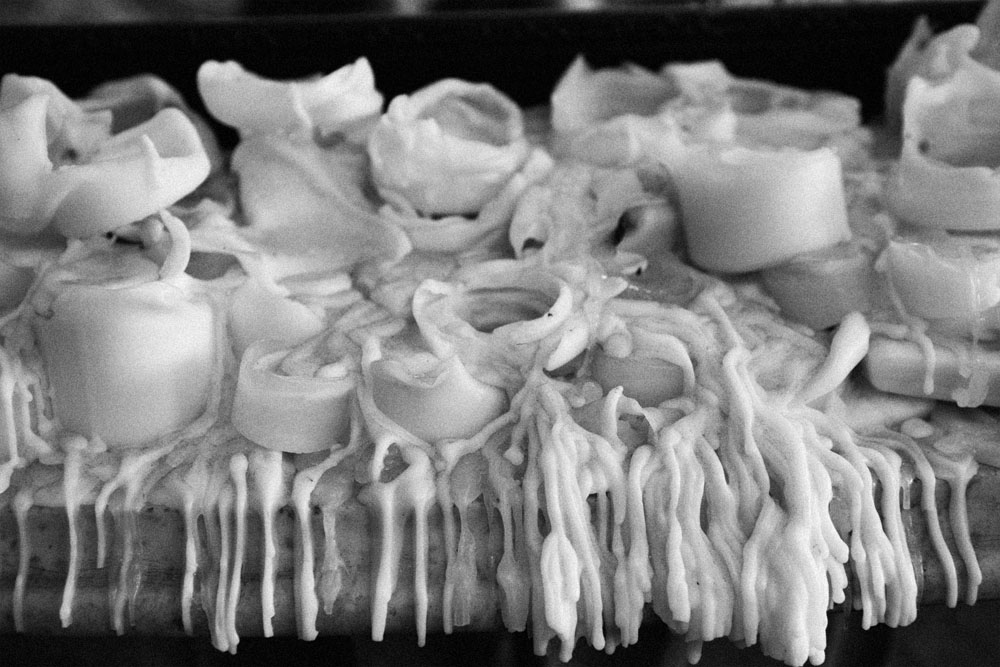 200 wax candles made this
skennedy93
Advertisement 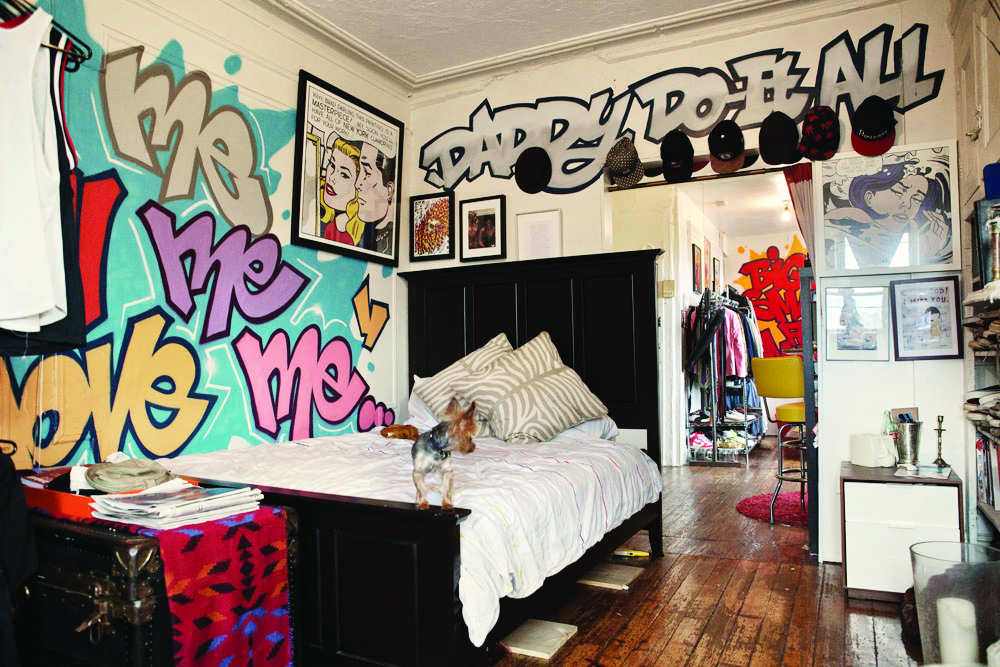 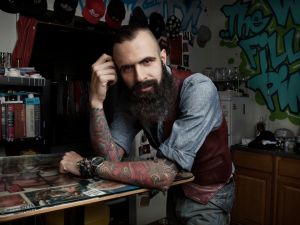 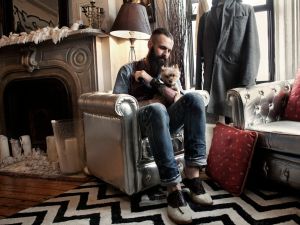 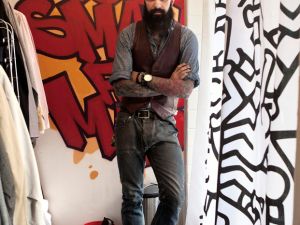 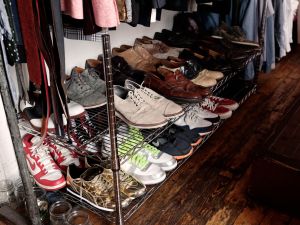 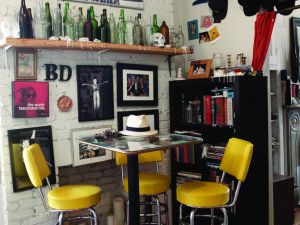 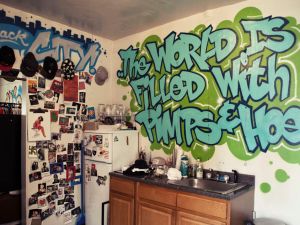 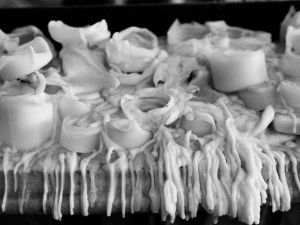 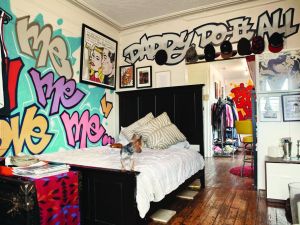 “When I was 17 and graduating from high school in the suburbs of Long Island, I told my mom  ‘I want to die on that island, not this one’,” said hospitality veteran Brett David, in his Lower East Side studio apartment. Before joining whiskey bar and restaurant Leave Rochelle Out Of It, he was the general manager of Sons of Essex, maître d’ of The General, and worked as Anna Wintour’s personal butler for almost five years. Mr.David also caters private events including for example, Chelsea Clinton’s wedding, and is creative director the 205 Club. His apartment is decorated with quirky touches including almost 200 white candles deliberately melted over the fireplace, a glass bottle collection and graffiti art by his friend Doug Aldrich.

So you’ve been living in this studio apartment for about three years. How did you design your home? I’ve been doing it since I moved in; it’s ongoing. It hasn’t been renovated in over 40 years, so there’s tons of charm with the beautiful rustic crown molding, ornate fireplace, and wood floors that look like they are about to collapse. I made it my own with the graffiti work and all  my rolling, clothing racks.

What’s the story behind the street art from Doug Aldrich? Doug is a friend. I’ve always had a knack for tagging (creating spray paint graffiti), but he is insanely better than I am with a spray can, so when I wanted classic BIG lyrics like “Biggie Smalls for Mayor” or “The world is filled with Pimps and Hoes,” I called him. “Lie to me and tell me you love me” was tattooed on my ribs about five years ago. Two years ago it went up on the wall and one year ago it became a custom neon sign for the entrance stairwell to my basement nightclub just down the street, 205 Club.

Are you a Keith Haring fan by any chance?

Keith Haring is among my favorite artists and I have imagery from one of his works tattooed on my arm. In fact, if you Google “Keith Haring Tattoos,” one of the first images that pops up is me.

Your tattoos convey a tough image, yet you have a teacup yorkie, Napolean. Who is the real you?

You could say I am a walking contradiction. I operate a whiskey bar, and don’t drink. I have a huge beard and 140 hours of tattoos yet I’m far from being a “tough guy.” I’m a white man who graduated with a minor in African-American Studies. So my dog Napoleon might not be the first pup you would assume I’d have upon meeting me, but after a 30-minute chat, you’d say, “Yeah, that makes sense.” I got my first tattoo aged almost 27 years old, and I’ve had some of the best men in NYC work on me, including Regino Gonzales, Luke Wessman and Ian Gama.

You were Anna Wintour’s personal butler for five years. What was that like?

It was mostly dinner parties and cocktails at her home in the city, or summer weekends at her home in Eastern Long Island. Anna is and has always been nothing but gracious and generous. When people ask me about her I always say the same thing, “You don’t get to be not only the most powerful person, but the most powerful woman in your field by being a pushover.” She demands the best and I worked for her for so long because she brought the best out in my work and myself. She is the epitome of class.

What were a few of the best life lessons you learned from her? If you are on time, you’re late. Say, “May I?” not “Can I?” And as always, the devil is in the details. It doesn’t matter how amazing that glass of ’86 Lafitte is, if there is a spot of lipstick on the glass, it’s ruined.

You played a lead role in Chelsea Clinton’s wedding. Can you tell me more about that? I was hired by Chelsea’s main event planner to run her wedding along with two other people. It was 525 people, and we were planning out the cocktail party, dinner execution, and after-party for over a month. I was up for 48 hours straight, but the wedding was a huge hit and people were dancing till 4 a.m. When people ask me if their marriage was “for show,” or just a PR move, I always think back to 3 a.m.; adults all gone, a bunch of “kids” in their 20s dancing to Mia Morretti, and Chelsea sitting on Marc’s lap exchanging loving glances and matching kisses. If that is not true love, my dear, it does not exist.

What are some of your favorite items in your home? My favorite item is my home! I thrive on awkwardness. But most of all, I love that when someone who has known me for five minutes or 15 years walks in, they all say the same thing, “Yeah, Brett lives here.” ν