On Sunday, for the second time in six months, the Ukrainian people went to the polls. This time it was to elect a new parliament. The elections occurred in somewhat difficult circumstances as Crimea remains occupied by Russia and additional parts of southern and eastern Ukraine have been destabilized by Russia and Russian-backed separatists. Voting did not occur in Crimea; and turnout was low in the conflict torn  regions of Donestk and Luhansk in eastern Ukraine.

Despite these significant obstacles, the election was, on balance, a success for Ukraine. The new parliament, based on exit polls and early returns, will be led by President Poroschenko’s eponymous Petro Poroschenko Bloc as well as by the People’s Front, the party of Prime Minister Arseniy Yatseniuk, and will have a very strong pro-west and pro-Europe orientation. The far right Radical Party will likely make it into parliament, but another rightist party, Svoboda, may just miss the five percent threshold. Parties and blocs associated with the ousted regime of Viktor Yanukovych did poorly as well.

Perhaps most striking is the contrast in the western reaction to the parliamentary election Sunday and the presidential contest in late May. Mr. Poroschenko’s landslide victory was greeted with something just short of elation in Washington. After his first meeting with his new Ukrainian counterpart in June, the usually stoic President Obama practically gushed: “What the Ukrainians said in the elections that resulted in the election of president elect Poroshenko … is that they reject violence, they reject corruption.it’s clear that he understands the aspirations and the hopes of the Ukrainian people.” The US subsequently pledged more support for Ukraine, although it still did not provide direct military assistance, and tightened sanctions against Russia. Many saw Poroshenko’s victory as a potential turning point in the crisis.

The parliamentary elections, however, were not met with a similar response in Washington. This is partially because Ukraine now must compete for attention with Ebola, ISIS and the midterm elections, but there is more to it than that. The lack of official enthusiasm, or more accurately, hope, around this election is evidence that gradually the U.S. is beginning to accept that there is little they can do to turn back Russian aggression in Crimea and elsewhere in Ukraine. The election of a solidly pro-west parliament in Ukraine is clearly good news for Washington, but it is, for the most part, not seen as anything more than an incremental step towards ending the crisis in Ukraine.

Timothy Frye, director of the Harriman Institute at Columbia University, attributes the less than effusive response to the parliamentary elections to “a growing realism that this is going to be a long term problem, even among the pro-Ukrainian element. There’s a greater realism that there are no easy answers.” Mr. Frye also noted that “in parliamentary elections the signals that get sent about winners and losers is much more ambiguous than in a presidential election.”

Western responses to Russian aggression in Ukraine thus far have, for the most part, failed. Despite a battery of strong statements, movements of ground and air power to NATO’s eastern borders, and sanctions, Russia has consolidated its control over Crimea and continued to occupy and destabilize parts of eastern Ukraine. This failure is probably best understood as the result of decades of poorly thought out western policy in the region as well as the presence of a nefarious and powerful Russian leader in Vladimir Putin. Nonetheless, the Obama administration cannot escape some blame. It is clear that their position of warning Russia that further aggression will be met with further warnings has not stopped Moscow–at least in Ukraine.

It is also, however, clear that other proposed and more aggressive responses like arming the Ukrainian military, a reasonable enough option that looks much easier than it probably is, and would inevitably lead to a debate about sending troops to Ukraine, are either to unlikely to succeed or could lead to long American involvement that the country has little appetite for. New Jersey Governor and possible 2016 presidential candidate Chris Christie has been reduced to bluster, responding to a question about how he would handle the question by saying ““I don’t believe, given who I am, that he (Mr. Putin) would make the same judgment. Let’s leave it at that.” Christie’s tone may have sounded tough, but the meaning was that he too is vexed about how to handle Russian President Vladimir Putin.

Russian aggression in Ukraine is real and a threat to the region. The relatively muted American response to this election — compared to just six months ago — offers stark evidence that while Washington may understand this, it has no easy answers. 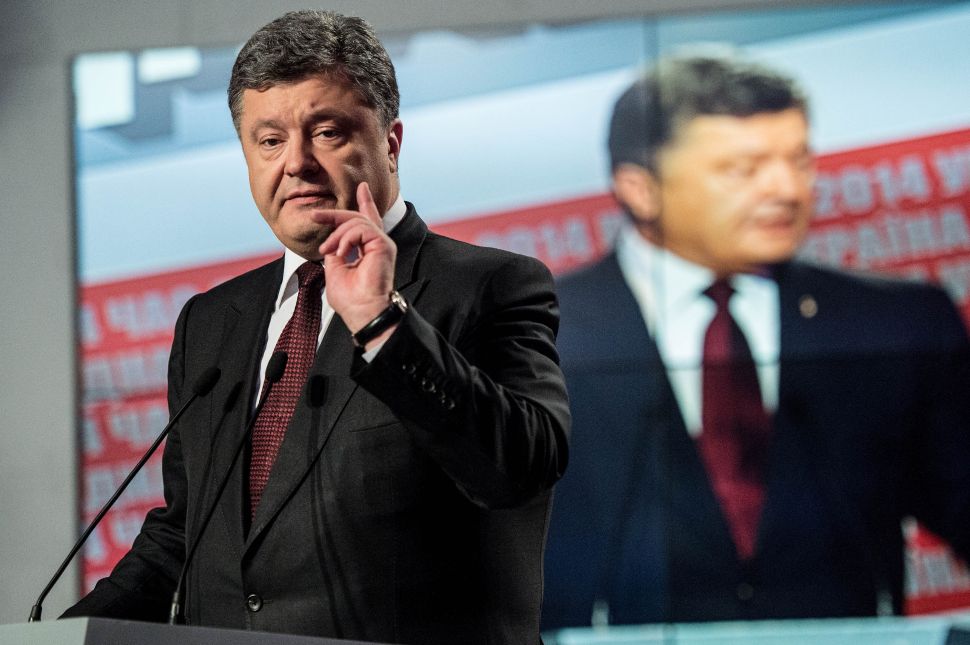