As President Obama conducts an undeclared war on radical Islamists in Iraq and Syria, the commander in chief remains at war with himself. His conflicted intellectual and emotional outlook—a tragic embodiment of modern liberalism—was put on display during his speech to the United Nations last week: a painful mix of confession and denial.

Mr. Obama and his liberal allies have argued that the “underlying grievances” that “feed extremism”—such as poverty, political repression, and belligerent U.S. foreign policy—must first be addressed. They have excoriated the moralistic rhetoric of a “war against evil” as a ploy to ignore these “root causes” of terrorist rage. Now the president believes that “no grievance justifies these actions” and that “there can be no reasoning—no negotiation—with this brand of evil.”

Mr. Obama came to office convinced that it was the presence of the U.S. military in the Middle East that was fomenting terrorist violence. He was awarded the 2009 Nobel Peace Prize for promising to get American troops out of Afghanistan and Iraq and chart a new course of diplomacy to “win hearts and minds.” In May 2013, he declared the end of the “global war on terrorism,” that al Qaeda was “decimated,” and that the United States merely faced “less capable al Qaeda affiliates.” His mantra: “There is no military solution to this problem.”

That was before the Islamic State of Iraq and Syria (ISIS) seized large swaths of territory in both those countries, redrew the borders in the Middle East, overwhelmed the Iraqi Army, and started beheading soldiers and civilians in an orgy of televised bloodletting. Now the president speaks of war, of a long and complicated war that involves every nation on earth. “The only language understood by killers like this is the language of force.” Now Mr. Obama is desperately trying to assemble a coalition of nations to combat this malevolency. “Today I ask the world to join in this effort.”

Mr. Obama has spent his entire tenure in office denying, repeatedly, that Islam offers any inspiration to terrorist atrocities. “Islam is not part of the problem,” he proclaimed in his 2009 Cairo speech to much applause. “The enduring faith of over a billion people is much bigger than the narrow hatred of a few.” Likewise, in his 2010 National Security Strategy, he purged any references to Islam or Islamic extremism in describing the terrorist threat to the United States. For all we can tell from this document, the radicals may as well be frustrated, out-of-work musicians.

Now—after nearly six years in office—the president insists it is time for the Muslim world “to explicitly, forcefully, and consistently reject the ideology” of al Qaeda and ISIS. Now he warns of “the cancer of violent extremism” that is destroying Muslim communities around the globe. Now he calls for “a new compact among the civilized peoples of this world” to end “the corruption of young minds by violent ideology.” He means, of course, the textbooks used in countless Islamic schools and the sermons preached by legions of radical Muslim clerics.

If Mr. Obama has experienced a spasm of moral clarity, it has yet to assume a credible political expression. He has no plausible strategy to defeat the barbarians—neither in the field of combat nor in the war of ideas.

The president has vowed not to send American combat troops into Iraq or Syria, but his own military advisors tell him that airstrikes alone will not destroy this enemy. Despite his boast of assembling an “unprecedented” coalition for this new campaign, there is not a single Muslim country in the region prepared to send its military into harm’s way. His much-trumpeted “anti-terror resolution” at the United Nations—requiring nations to “suppress” the recruiting and financing of foreign terrorists—lacks any teeth or accountability.

Mr. Obama has clung to his delusionary account of the nature and threat of Islamist jihad up until this very moment. He has been dreaming of a more peaceful world: a fantastical world where the toxic mix of religious hatreds and the will to power is overcome by sweet reason. And he has been joined in this illusion by a liberal political establishment at home and abroad.  As Mr. Obama described the U.N. anti-terror vote: “It is very rare,” he opined, that the so-called international community “achieves the kind of consensus that we see represented in this resolution.”

Not so rare, actually. Even as the storms of evil gather, international bodies can usually be counted on to substitute speeches and declarations for effective action. “Virtuous motives, trammeled by inertia and timidity are no match for armed and resolute wickedness,” warned Winston Churchill. “The cheers of the weak and well-meaning assemblies soon cease to count. Doom marches on.”

Joseph Loconte is an associate professor of history at the King’s College in New York City. He is the author of God, Locke, and Liberty: The Struggle for Religious Freedom in the West. 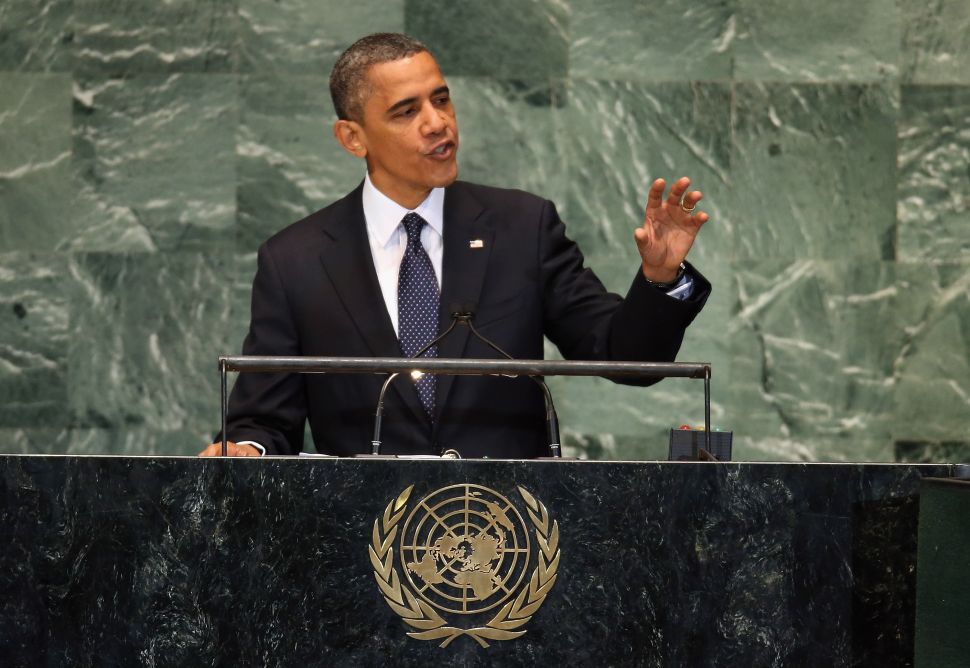