If, say, you’re the director about to lay The Golden Egg on Broadway, what better place to meet the press than Joe Allen? That landmark home-away-from-theater drinking hole and restaurant has dashed hopes and broken hearts splattered all across its blood-red brick walls. Posters of shows that were one-night-stands and marginally more line the room, fleeting flops hanging in immortality. There’s even a special wall for The Genre That Never Makes It (the vampire musical), and occupying the pride-of-place position at the front door is the grand mother flop of them all: 1983’s Moose Murders.

“I like to have two or three on the wall,” chirped Jack O’Brien. “It keeps me humble. I know there are two, for sure—More to Love and, I think somewhere, Impressionism.”

The director’s latest—It’s Only a Play, about the tense opening night of The Golden Egg—bows October 9 at the Schoenfeld, but it won’t even make a dent in that wall.

“We haven’t seen a field of comics this rich in this town for quite some time,” beamed Mr. O’Brien. “It’s a great ensemble piece, and the quality of the writing calls for a great ensemble. We must have cast this in 48 hours. We just picked up the phone and called our friends and said, ‘Do you want to do this?’ They all said, ‘Absolutely! I’m there!’ Everybody wanted in. They could tell the parts were great.”

At the start of the play, the Egg has landed, and it’s all over but the verdict and the body count. The setting is the properly posh bedroom of the show’s novice producer where the first-nighter coats are deposited (costumer Ann Roth makes it a running gag with extreme nightwear for Al Pacino, Lady Gaga, the cast of The Lion King, etc.).

“This view is not something the ordinary audience sees,” said Mr. O’Brien. “We on the inside know about the pressure of opening night—the fear, the insecurities, what’s at stake—but the audience doesn’t know that. They don’t know the bloodletting. They don’t know how the axe can come down and you can’t believe it. You’re like a stunned bunny for a while. ‘The thing I worked on for five weeks is no fucking good? Why didn’t somebody tell me?’ We’re like children. We all believed it. We wanted to believe it, so, in an odd way, this is more than just an inside-theater thing. It’s life.”

Terrence McNally first saw the scene above in April 1976, and it inspired him to write It’s Only a Play. “I got the idea for this play at the opening of another play F. Murray Abraham was in,” he recalled, but he couldn’t remember the title. (It was Legend, and it wasn’t—staggering through four more performances at the Barrymore before folding.) “I went to the opening-night party and thought it’s a great setting.”

His first attempt at the play, Broadway, Broadway with Geraldine Page and James Coco, died in Philadelphia in 1978, but parts of it were resurrected Off-Off-Broadway four years later as It’s Only a Play. A version of that played Off-Broadway at Manhattan Theater Club in 1986. For its step up to Broadway, Mr. McNally radically revised and updated the piece.

“I just didn’t want to do it as a period play,” he said. “I thought it would be fun to look at it fresh. To me, it’s a revision—a very revised version of the play I wrote years ago. I was a very young man when I wrote it, and the theater has changed a lot since then. We don’t go to the Times and wait for the review anymore. It comes on text messages or on the Internet.”

What hasn’t changed is the high cost of playing in the Broadway traffic, he said—“how vulnerable we all are—how we work very publicly and have very public humiliation when our work is not well received—the silly things that we do, all to have a success on Broadway … We really go out on big limbs. We don’t see the humor in it for all the hard work and the pain of doing it.

“But I think the tagline for the play—‘A Broadway comedy about the comedy of Broadway’—sums it up pretty well. Those who enjoy human folly will find a lot to laugh at in this. It’s about friendship and loyalty and perseverance, but this play has a serious core, too. Broadway really is important, and what we do really matters.”

Like the playwright in It’s Only a Play, Mr. McNally had a disastrous Broadway debut: And Things That Go Bump in the Night went thud after 16 performances at the Royale. “My very first play was done on Broadway, which is unusual. I’d never had a play done in my life. Suddenly, I was on Broadway. Of course, theater has changed. It wouldn’t happen today. That play would be work-shopped and developed to death.”

Mr. McNally didn’t entirely escape the Wall of Shame at Joe Allen. He left after six weeks’ work on Here’s Where I Belong—the musical version of East of Eden. “They took my name off it, but somebody got in there and peeled off the name of the guy who replaced me. My name’s there, and it shouldn’t be. It’s not my show. I don’t like it being there, too—but, listen, I hope that I still keep a sense of humor about all this.”

Not to worry. That sense of humor is uproariously intact in It’s Only a Play. As he has his alter ego playwright say in the play, “New York without theater is Newark.” 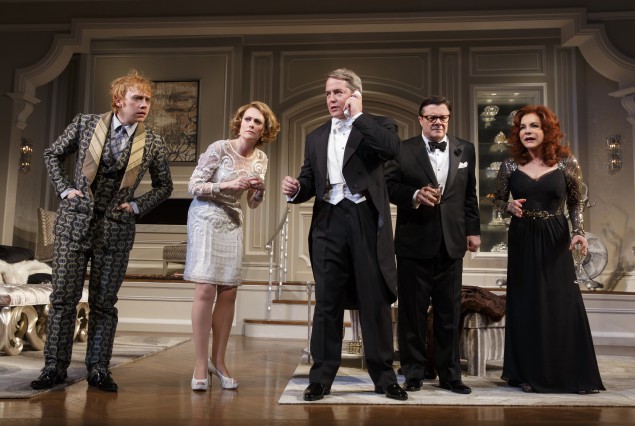