They may be members of the same party, but Borough President James Oddo declined to throw his weight behind Congressman Michael Grimm today.

Mr. Oddo has not endorsed Mr. Grimm (or Mr. Grimm’s Democratic opponent Domenic Recchia Jr.) in the tight congressional race, and declined to do so today when he, two other borough Republicans and Mayor Bill de Blasio were asked to weigh in on the race during an unrelated Staten Island press conference.

“I have no comment about the congressional race, but I am supporting Assemblyman Cusick for re-election,” Mr. Oddo said, referring to his controversial cross-party endorsement of popular Assemblyman Michael Cusick, a Democrat.

The borough president even held up a small lapel-sized button with Mr. Cusick’s name on it, for emphasis. Mr. Cusick is expected to handily win re-election against a lesser known GOP challenger, Joe Tirone.

The question about the congressional race came after Mr. de Blasio announced that $28 million in federal Sandy relief dollars — allocated by Congress in a bill often touted by Mr. Grimm — would go to shoring up Staten Island University Hospital’s campus. Mr. Grimm, who was not present at the press conference, did not address Mr. Oddo’s comments but did tout that funding again.

“I am very pleased that my fellow elected officials are grateful for the federal funds that I fought so hard to secure and I’d like to once again thank my colleagues in Congress that supported the Sandy relief bill that delivered the grant that was celebrated today,” Mr. Grimm said in a statement the Observer.

Mr. Oddo’s snub of his fellow Republican should come as no surprise to watchers of Staten Island politics, where GOP in-fighting and feuding is not uncommon. While the two pols were never particularly close, they had a falling out over a particularly bitter primary battle for Mr. Oddo’s former City Council seat.

Mr. Grimm and his mentor, former Borough President Guy Molinari, backed Lisa Giovinazzo in her challenge to the eventual winner, Councilman Steven Matteo — Mr. Oddo’s former chief of staff and his chosen candidate in a race so acrimonious it fractured the borough’s Republican party, leading to the ouster of its chairman.

Mr. Oddo and Mr. Grimm have mostly declined to speak about each other — “I have a standing policy because there are only 24 hours in a day not to comment on that individual,” Mr. Oddo said back in April, at a Hurricane Sandy recovery event Mr. Grimm declined to attend.

Mr. Oddo has clashed more often, and more publicly, with Mr. Molinari, the congressman’s political godfather — who recently told the Staten Island Advance that Mr. Oddo’s endorsement of Mr. Cusick amounted to “playing footsie” with Democrats and promised to teach him “a lesson.” In a blistering response, Mr. Oddo told the Advance that Mr. Molinari, who once held both his seat in Borough Hall and Mr. Grimm’s in Congress, reminded him “who and what I never want to become.”

Other than the mayor, all the elected officials at today’s event were Republicans — Mr. Oddo, Council Minority Leader Vincent Ignizio, and Mr. Matteo — and none of them took the opportunity to stump for Mr. Grimm, at least during the press conference. Mr. Matteo, the winner of that divisive primary, didn’t step up to the microphone to take the open question. Mr. Ignizio, meanwhile, declined to talk politics at the bi-partisan affair.

“I just want to say this is a great day for Staten Island University Hospital, and I’m not going to get into politics with the mayor here, or with anyone else for that matter, at this event,” Mr. Ignizio said.

But afterward, Mr. Ignizio reiterated his support for Mr. Grimm.

“I support Mike — I’ve supported him since he first ran,” Mr. Ignizio said.

“I think he will be a fantastic congressman, so I strongly encourage people to support Domenic Recchia,” he said.

This story has been updated with comment from Mr. Grimm. 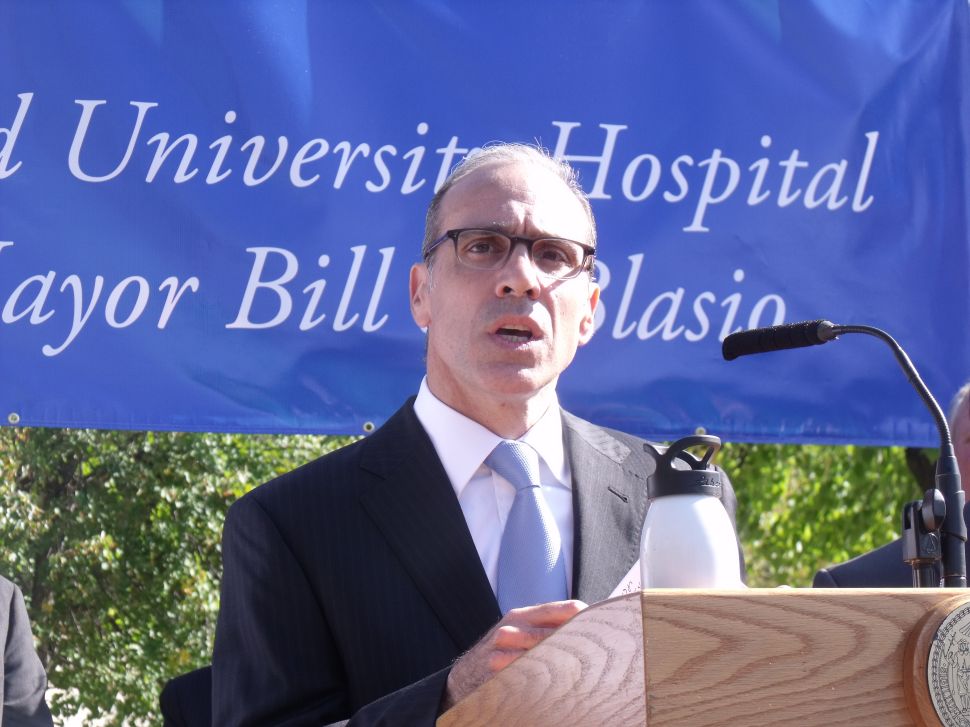