A local man has been charged with criminal nuisance after spray-painting an interior wall of the Whitney Museum this past Saturday. The incident occurred when a rouge museum-goer graffitied large black letters on a wall near Jeff Koons’ Hanging Purple Heart. The suspect, identified as New Yorker Christopher Johnson, 33, tagged the strategically chosen wall before cooly strolling away, leaving behind the word “PPRRiceless” reflected in the nearby piece of art.

The cloak and dagger episode occurred during the 36-hour farewell marathon of the Jeff Koons Retrospective, celebrating the museum’s final exhibit before it relocates to the Meatpacking District.

The misdemeanor may have been avoided had onlookers been more apt to reach for the paint can rather than their iPhones, as Mr. Johnson successfully tagged the wall without so much as a cursory glance from fellow attendees. Many of them, like the would-be witness seen in this Instagram video, were busy taking selfies in the reflective purple heart.

This isn’t the first time Mr. Koons’ exhibit has been targeted by disgruntled patrons. Back in August, Canadian performance artist Istvan Kantor expressed his distaste by painting a large red “X” across the third floor wall behind Rabbit (1986).

Though the vandal chose to deface the wall and not the art itself, Mr. Johnson may not have felt as cool, calm and collected as he appeared in the video. He misspelled the Posse’s intended message “PPPriceless” as “PPRRiceless.” The suspect was charged on a variety of counts and was released on $1,000 dollars bail.

All of the art was unharmed and the wall was repainted over night. 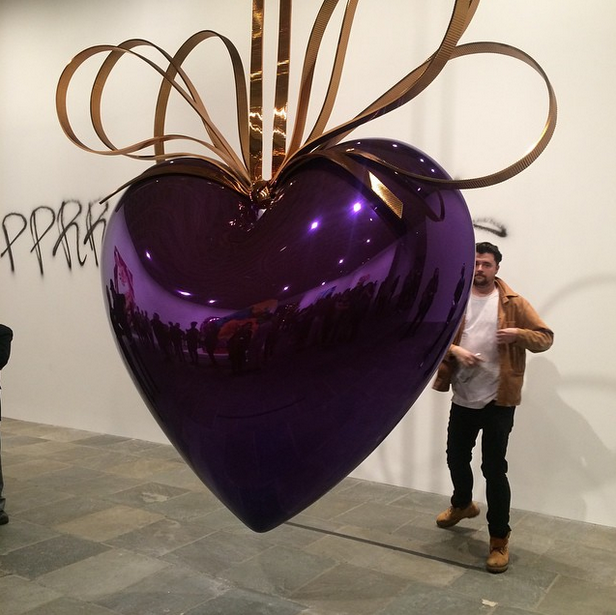