The Pool Room at The Four Seasons Restaurant is one of the classic spaces in the city, the minimalist Philip Johnson design striking an exacting backdrop for the power lunches and celeb-heavy dinners that dot the landscape of tables. And until recently, it was the home of a giant Picasso, the 19-by-20-foot tapestry Le Tricorne. After 55 years at the restaurant, Aby Rosen—the real estate tycoon and major collector who owns the Seagram Building, where the Four Seasons is housed—decided it had to go. Some shouting matches ensued, but Mr. Rosen finally got his way, and the painting was gone.

Last night I went by for the first time since the Picasso had been removed, and there was a noticeable void, a hole there in the foyer where the gigantic work once hung. It was the Storm King fall gala, honoring the Calder Foundation, which had installed two grand Calder mobiles in the space: 3 Segments, 1973, and Untitled, 1952. Storm King president John Stern held court by the square bar as Whitney director Adam Weinberg, artist Mark di Suvero, and national treasure Fran Lebowitz hobnobbed and such.

Also working the crowd with ease was Julian Niccolini, the inexhaustible perma-host of the restaurant, which he co-owns. Mr. Niccolini is the lion tamer of the three ring circus that is The Four Seasons, and he oversees a lunch like an autuer edits a movie. He also once penned a wonderful column for these pages. I went to say hello, and after catching up, he began to reach for his jacket pocket.

“Do you know that the Picasso is gone?” Mr. Niccolini asked.

“Well, do you want to see what’s replacing it?” he said, pulling out a piece of paper from his suit jacket.

He unfolded the paper to reveal an image in its full glory. It was the grand foyer where Le Tricorne had been up for a half century, but photoshopped over the Picasso was a giant picture of Aby Rosen in repose, hand on chin, contemplative, with a hilariously serious face. Amazing.

Well, we’re not sure Mr. Rosen would approve, but I sure do. It makes perfect sense to replace the Picasso with 20 feet of Aby Rosen’s face. Bring it on. 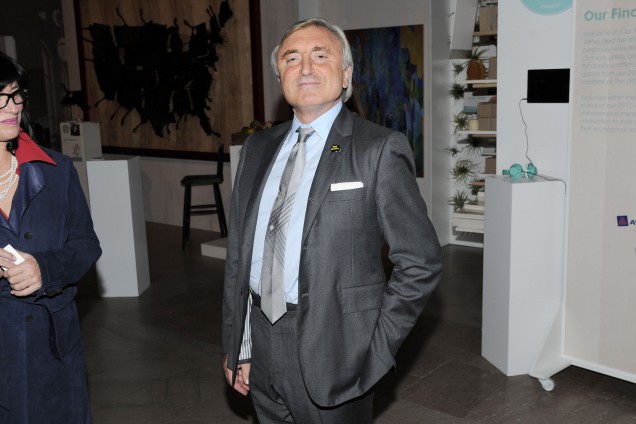