A few years ago when Lindsay Lohan was pulled over late one night and it was discovered that she was holding drugs, I decided to use the incident as a punch line. The next morning, I walked into my office and shouted out, “I had a fabulous dinner with Lindsay Lohan last night, but I had to leave right after. I sure hope she got home ok.” The statement got a huge laugh. Sadly, it wasn’t the last time Lohan’s life was on public display as more reports of trouble with the law and stints jumping in and out of rehab were constantly featured on both tabloid shows and national newscasts.

I’ll admit that like most people, I wrote her off as just another screwed up actress whose fast fame had caused her to think that she was both physically invincible and legally untouchable. What’s sad is that this is a human being we’re talking about and while we may joke about her actions, we truly never know what’s going on in someone else’s life; the circumstances that have led them to make choices and act out in ways that to the rest of us seem unthinkable

The main character of this episode of SVU was clearly modeled after Ms. Lohan, but to their credit the detectives looked past the surface behavior of the young actress, Ms. Tensley Evans, to uncover not only how she had fallen so far but who had ultimately caused the young woman to lose all sense of self-worth.

What they uncovered pointed to a man who, while creating a path to stardom for young wanna-bes, was also responsible pushing them to abandon all morals and ethics in exchange for fame.

The episode opens with Amaro, still working as a beat cop, arresting Tensley for leaving the scene of a hit and run, but not before the actress attempts to get out of the situation by promising Amaro some sexual favors. By-the-book Amaro will have none-of-it and not caring how famous she is, escorts her to court.

The judge, remarking that this is Tensley’s fifth appearance before her, questions Tensley’s commitment to staying on the right side of the law, at which time Tensley decides to accuse Amaro of trying to sexually assault her.

To get the full story from Tensley, Carisi and Rollins whisk her back to the squad room where she then reveals that the night of the accident she left rehab because her counselor was inappropriate with her.

Speaking with the counselor, the detectives realize that Tensley once again was lying about what happened at the facility, conveniently leaving out that she’d performed a sex act on a 15-year-old boy during her short stay.

Of course the 15-year-old doesn’t see it as a crime, saying that because Tensley is famous, it’s the best thing that’s happened to him.

At this point, Benson, upon the advice of a psychologist who examined Tensley, decides to take a crack at understanding what’s really driving this young woman to act out in such a sexualized manner.

Using skills she’s honed over the years, Benson pulls it out of Tensley that at the beginning of her career, when she was 13 or 14, she had sex with a producer who promised her a film role, then he passed her around to his friends. Her shockingly casual attitude about her past culminates with her revealing that she knew this was what she had to do to become famous.

The producer in question is Adam Brubeck who, while hosting a pool party with clearly underage girls, says that Tensley is lying which only seems to spur the detectives on to investigate her claims even further, surmising that there may be other victims who put out for Brubeck.

In Barba’s office, Rollins and Carisi seem to have a bit of contest going on to see who can be the most passionate about the case, and uncover the most useful information;
Carisi wins when he reveals that he has information about a 14-year-old girl who drowned at a Brubeck pool party in Beverly Hills, a party attended by Tensley.

When Benson pushes a visibly upset Tensley to tell what she knows about the incident, the girl storms out of the room, locking herself in the bathroom. Sensing something is wrong, Benson pushes her way into the bathroom to find Tensley has slit her wrists.

After receiving treatment for her wounds, Tensley reluctantly admits that the girl died performing a sex act on Brubeck in the pool.

When confronted about the possibility of his involvement in a cover-up, Brubeck’s in-house attorney, to save his own backside, gives the detectives DVDs of the producer making young girls perform sexually, but with their clothes on. Barba explains the DVDs prove that the Brubeck is very sly and only had sex with 16 year olds in states where that’s the legal age of consent – until Barba finds one with a Canadian label on it.

Just like that, Rollins and Amaro jet off to Canada to interview the girl in the video and she tearfully admits that she spent a weekend with Brubeck to ‘audition’ for a film.

In interrogation, the smugness of Barba and the confidence of Benson make it clear that they know after all of the stops and starts, they finally have what they need to put Brubeck away. With no real intention to make a movie, Brubeck traveled to another country with the express purpose of having sex with someone under the age of 18, which is a federal crime. The dynamic duo of detective and prosecutor are all too happy to turn Brubeck over to the feds for prosecution.

At the episode’s end, we see her on a TV show talking about turning her life around, proclaiming that after she finishes her community service she’s been offered a role on Orange is the New Black. Rollins is miffed, Amaro says “Justice has been served’ — but has it, really?

There are some points made here about the sexualization of young girls and the role of the media with regard to that, but what about Tensley and the 15-year-old boy? Shouldn’t she be serving time for that and not getting just community service? If it was a man in his twenties and a 15-year-old girl, there most certainly would be some sort of incarceration involved, but maybe this is SVU’s sly backhanded way of pointing out this double-standard in the law as well. Let’s go with that and then it does seem justice has been done in indicating this fallacy in the system.

This episode signals yet another break from the traditional Law & Order storytelling mold in that there weren’t clear cut steps from the police investigation to the prosecutorial trial with an ironclad judicial outcome being handed down in the final moments of the story. While that type of episodic movement is perfectly acceptable and satisfying, this installment seemed a bit more realistic in that this is traditionally how the legal system works; wherein the struggle doesn’t lie in the courtroom proceedings but gathering everything necessary for the prosecutor to present an in defensible case. With regard to this case, we know that although we don’t see the resulting the trial, the team has done their job in sealing this man’s fate.

In addition to this unconventional method of presenting this story, Executive Producer Warren Leight recently told me that one of the goals this season is to show how the detectives will be viewing things a bit more through the prism of their own experiences. With this is mind, it was clear to see that Rollins and Benson came at this investigation from noticeably different angles. Rollins was agitated that Tensley kept managing to avoid any punishment for her actions, while Benson, not letting Tensley get out of anything completely scot free, seemed to be more on the sympathetic side of the equation. In the past, she’s always been a bit skeptical when necessary and early on in this case, faced with many lies from Tensley, she still repeatedly seemed to give the girl the benefit of the doubt each time. Is it her past experience that told her to keep digging into the girl’s background to learn about her motivation or is her new role as a mother making her sees things that she hasn’t noticed before?

This dissimilarity in the handling of this case between Benson and Rollins adds another interesting twist to the narrative in that it seems like Rollins may have had some wild moments like Tensley in her past and thus would be sympathetic to the girl’s plight more so than Benson, who appears to have always tried to walk the straight and narrow. It’s great to see TPTB stray from the obvious in these character’s choices and actions.

Leight also mentions that one of the mantras of his regime is that everything changes and that it’s important to portray this fact accurately within the SVU team. Clearly the most obvious change among the squad is Benson’s foray into motherhood. This makes for some interesting character movement for the Sergeant and as this episode ended with a very visibly shaken Benson rushing toward the elevator, announcing that Noah had been rushed to the ER, the stage is set for a storyline that’s sure to be fraught with tension and excitement in the next episode.

It’s also exciting right now to see Amaro back where he belongs – in the squad room. While it was interesting to have him out on the street, it’s now going to be fascinating to watch he and Carisi occur the same space. Carisi, in his short stint so far, has shown that he does have some aptitude for this work and where he goes working in collaboration with Amaro will be a treat to watch. Throw Fin (sadly missing in this episode) into this mix and all bets are off as to how this conglomeration of personalities will function as a group.

Personally, I think that’s why Fin was (presumably) out on assignment this week; it would have been just too much to have new guy Carisi, just back in the unit Amaro, and wise Fin together so soon. Personality overload might have distracted from this genuinely intriguing case. Plus, this gives us something more to look forward to next week, as if a serial killer/hostage crisis and baby Noah in jeopardy aren’t enough.

And, just a reminder, this is just the beginning of the season, there’s no telling what could possibly go down over the course of the next eight months. 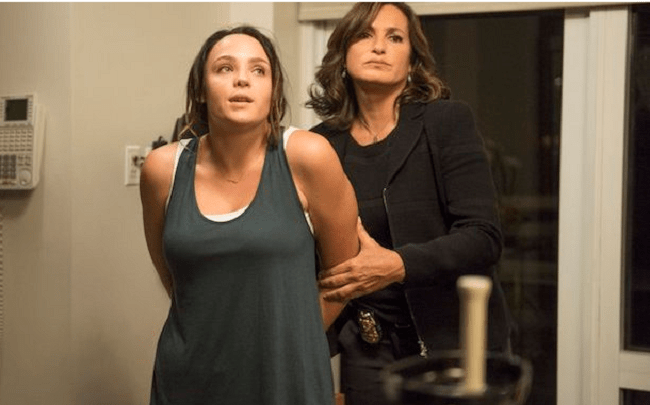