The squirm factor of this episode zoomed straight up to an eleven from that opening scene and didn’t let down from there.

Starring in that initial video, entitled, appropriately, “18 with a Bang,” is co-ed Evie Barnes, now a student at Hudson University, whose glasses and mousy look belie her alter ego, Roxxxxane Demay, an adult entertainment persona she created in order to earn enough money to pay for college.

When two classmates watch Evie’s video on the Internet, they hatch a plan to get some action from the petite woman, by inviting her to a party, during which they take her into a bathroom and subsequently assault her – or so she says.

Before the SVU squad can vet Evie, the defense attorney representing the young men, John Buchanan, shows up with a flash drive full of videos featuring the young woman. Many of these are of a ‘rape fantasy’ nature and show Evie being slapped and crying as she initially resists her suitors, but still completes many sexual acts on film.

Working to build a case against the men, the detectives get one of the lads to agree to testify against the other. In court, while the defendant insists that in every video Evie said no but had sex anyway and that that was exactly what happened in the bathroom, Barba says that she signed a consent form for those videos and that in this instance she did not give consent. The nail in the coffin seems to be when Barba gets the young man to admit that Evie did say no and he went ahead and had sex with her anyway. When Barba says, “That’s the very definition of rape,’ the young man seems stunned and the case seems open and shut. This turn appears to be confirmed when the jury comes back with a guilty verdict against the young man.

Buchanan asks the judge to set aside the jury verdict and give his own directed judgment. Citing a lack of evidence, the judge shockingly dismisses the charges against the young man and sets him free. Barba is understandably livid and accuses the judge of factoring in Evie’s sexual history, and in his words, “giving men permission to assault a woman based on her sexual history.”

To add insult to injury, Evie is expelled from school while her attackers remain enrolled and on track to graduate from Hudson.

Feeling she didn’t get justice, Evie leaves a haunting video saying that her choices were taken away from her and she only has one choice left. The final word of the video is “Goodbye.”

Pissed at the decision by the administration at Hudson to kick Evie out of school, Benson takes it up with the university President, chastising her for expelling a rape victim while the young men accused of the crime were still welcome to continue their studies. The President says that the young men may be asked to leave in the future, but insists that Evie wasn’t expelled because of her accusations but because she violated the school’s code of conduct by appearing in violent pornographic videos. Even with Benson’s impassioned plea, Evie is not readmitted to the university.

Benson’s actions in this case are once again under the watchful eye of Chief Dodds, who seems to relish barging into the squad room and dragging Benson into her office to give her an earful about what he thinks she’s doing wrong. To her credit, Benson has continued to stand her ground with the Chief. Hopefully, she’ll win him over soon, as this continual battering from a superior is growing a bit tiresome. Nobody likes to see someone constantly getting reprimanded for trying to do their job to the best of their abilities.

While the very few seconds of the hard core videos and the actual assault scenes shown in this episode were, as mentioned earlier in this article, squirm-inducing, the fact that assault on campus and the horrid practice of victim blaming/slut shaming persist in our society are the real stomach-turning components here.

This episode is based on the very real life of a student who attended Duke University. In an article published just before the episode aired, she tells her personal story and critiques the SVU episode as well. It’s a fascinating read and she, Belle Knox, deserves praise for revealing her true feelings about seeing her story played out in on an episode of television.

Belle concludes, as I’m sure many viewers have as well, that once again, SVU has done an outstanding job in arguing all sides of these very controversial issues.

Switching here to a bit lighter tone, this episode also featured some surprising interaction within the squad room that bears some discussion.

First of all, what’s up with Benson and Rollins? On at least two instances there was some noticeable tension between the detective and the Sergeant. Is this setting up something that’s going to go down between these two in the near future? They seem to be playing nice but Benson may still be reeling Rollins for her snide comment about Benson needing a therapist after her ordeal with Lewis.

Surprisingly, given that he’s still new in the squad room, there was absolutely no tension between Benson and Carisi; In fact, the newbie actually earned some kudos from the Sarge for the way he coerced a confession out of a suspect. He’s really coming along, isn’t he?

And, how about that Fin? When Chief Dodds wants to talk to Benson and her ‘Number Two,’ she anoints Fin right then and there to the position, and boy does he step up. He backs Benson’s play at every turn, even when she tries to shield her squad from Dodds wrath and take the heat herself. Choice well made there, Benson, but what does this mean for Fin exactly? Let’s remember that Fin is probably the only member of that squad who’s never been in trouble with IAB and he surely likes it that way. His whole M.O is to do his job and do it well, but do it significantly under the radar. Is that possible if he’s ‘number two’ in the unit? I guess we’ll see.

Sadly, the only thing this episode was truly missing is Amaro. I guess he was out on ‘assignment’ somewhere, which is totally believable, but please, please get him back in the squad room quickly as I think we’re all dying to see just how he and Carisi work together… or don’t. Either way, those two mixing it up in pursuit of justice will make for some great television.

SVU takes a break next week but will be back the following Wednesday with a creepy episode that rifts on the Blair Witch Project and the Slenderman murder case. 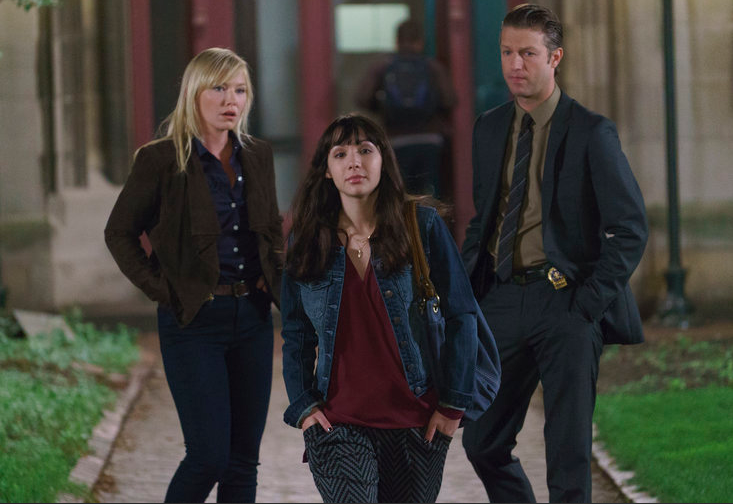