My new book tells of the tragic rise-and-fall of New York real estate baron Harry Macklowe. In 2007 Mr. Macklowe was riding high after his unexpected success with the GM building, where his visionary ideas—including the creation of the iconic Apple flagship store in the basement—created $1 billion of value.

But then things started to crack. Mr. Macklowe’s wife Linda was pushing for his son Billy to assume leadership, and more responsibility at his firm, Macklowe Properties. And Harry wanted more. He wanted to gamble again.

Suddenly his friend Roy March told him that the New York portfolio of EOP—Equity Office Properties, the biggest public landlord of commercial office space in the U.S.—was up for grabs at $7 billion. It was quite a prize. Seven million square feet of prime real estate in New York City. But Mr. Macklowe would have to move like lightning. To pull this off, he would have to close at the same time as Blackstone, which was buying the bulk of EOP; there’d be no time for argument, for due diligence … or regret… Here is what happened in late January 2007.

Roy March came up with the label—a chapter title from Kenneth Grahame’s children’s book The Wind in the Willows—as he warned both Gray and Myers that negotiations with Macklowe would not be smooth, but that Macklowe would get there in the end. Macklowe wanted the buildings “worse than anything.” The next two and a half weeks—the countdown period—would come to be known within Blackstone as “Mr. Toad’s Wild Ride.”

March promised Gray he would act as a facilitator. “Harry can pull this off,” he said, “but you have to understand, we’re gonna go on a wild ride.”

What Gray and Myers understood this to mean was that “Harry will show up, from one day to the next, and you’re never quite sure with Harry who he is or what he’s gonna do, and you just gotta be prepared.”

As if Macklowe wasn’t complex enough, Gray soon found he also had Harry’s son to contend with. For the first time, Billy was to take the lead in executing a Macklowe deal. From Gray’s point of view he was risking his career and an unprecedentedly large amount of money—and Blackstone’s stellar reputation—on perhaps the trickiest, least predictable father-and-son act on the planet. “I would never have taken the risk that Jon Gray did,” says EOP’s then CEO, Richard D. Kincaid, who watched the whole drama play out from Chicago.

On Sunday, February 4, with just two days to go before the EOP shareholder vote, Gray was watching his home team, the Chicago Bears, play the Indianapolis Colts in the Super Bowl when his phone rang and he heard that Vornado had parried again. They were now at $56 per share but the deal was “softer” than he’d anticipated. It was not all in cash, which was what Zell wanted—and the offer was not legally binding.

Gray saw his chance: he could win this. Blackstone would deliver a $55.50 per share binding all-cash offer. He knew Zell would take it and submit it two days later for a shareholder vote. He had to get ready to close by the week’s end. He needed Macklowe ready with his $7 billion in the next five days. The timing was critical.

Gray called Macklowe, who in turn called Rob Sorin, who was watching the football game in New Jersey. At midnight Sorin and Rob Horowitz gathered in the law offices of Simpson Thatcher, Blackstone’s lawyer, along with Anthony Myers and Billy and Harry Macklowe.

Sorin recalls his immediate reaction that night as Harry told him, “We are buying EOP.” “I was terrified,” says the lawyer.

Sorin felt it was too much money too quickly, that the lender’s terms would be extraordinarily onerous even for “gung-ho Harry”—and they didn’t know the properties they were buying well enough. They still hadn’t finished their due diligence. The leases on these buildings were long-term and there was no obvious profit to be made for at least five years.

But Harry had made it clear there was no stopping him. Billy Macklowe, too, was being unusually assertive, says someone in the meetings. “He was very rah-rah.” This worried other members of the Macklowe team. “The biggest, trickiest deal of Harry’s career? It was completely the wrong time for Billy to try to carve out an identity for himself,” one of them would later say.

By Tuesday, Eric Schwartz had given Rob Horowitz Deutsche Bank’s final terms: Deutsche Bank would loan him $5.8 billion—with a term of one year. The EOP buildings would serve as collateral. The bank fees from such an enormous loan would exceed $100 million. That left $1.2 billion for Macklowe to scrape together. Who would lend him $1.2 billion? There was a very short list. The obvious candidate in Horowitz’s mind was the hedge fund Fortress, which had recently lent Harry money for another deal. That close, good relationship with the managing director, Steve Stuart, Eric Schwartz’s golfing buddy, paid dividends.

Stuart presented a proposed term sheet that was just over a page long. It agreed to lend Macklowe $1.2 billion for a one-year term at an interest rate of 15 percent.

But—and it was a big but—not only would Macklowe have to pay it back in full in precisely 12 months, but it was collateralized by everything owned by Macklowe Properties (including the GM Building, which Fortress had valued at $2.8 billion), and on top of this, printed in bold, was a clause stating that Macklowe had to guarantee it personally. Should he default, Harry Macklowe would owe Fortress every work of art, every piece of his boat, every house, even the shirt off his back. Stuart took this term sheet to his boss, Peter “Pete” L. Briger Jr., a former Goldman Sachs partner with a reputation for being taciturn and tough.

Stuart showed him the paper and said: “We can do the world’s largest hard-money loan with a bunch of collateral that we think is real and a personal guarantee, you know, for a billion-two.”

Briger agreed to do it.

Rob Sorin watched Harry and Billy sign the Fortress deal, but told them he didn’t like the terms.“Briger is a hard-money lender. You’re playing with fire… . They’re very tough. When I say hard money, I mean they’re lenders of high risk, not necessarily last resort, but pretty close to it.”

Even Rob Horowitz had his reservations. He worried about the EOP buildings, the lack of rent revenue. He’d been doodling on his A4 paper. How would they repay the loan that fast?

The team at Blackstone was worried as well. Gray called both Eric Schwartz and Steve Stuart to check that they were really financing Macklowe. “Harry’s a wealthy guy but he’s not Boston Properties, and this was seven billion dollars… and it was 99 percent financing, so anything could go wrong.”

Mike Fascitelli heard what was happening and thought they’d all gone mad. The risk was extraordinary, he felt, a sign the market was completely overheated and that a downturn was inevitable. He told Harry that to finance it for one year “you gotta be out of your mind” and that Eric Schwartz must have “lost his brain” to make such a big loan. Even so—just in case—he was going to take a small mezzanine part of their debt. If Harry were to lose the GM Building, once again Vornado wanted to be able to buy it.

Macklowe went on singing and cracking jokes as usual. He now says he believed he was covered. “Truth to tell, Deutsche Bank told me they would consolidate everything.” He believed Deutsche Bank had his back after all these years, all those deals. They’d refinance the Fortress loan. “Fifteen billion dollars is a lot of financing.”

Once Harry had “blessed the deal,” he left the bulk of the paperwork and haggling up to the lawyers—and Billy. There was a lot to be done in just days.

Billy Macklowe was clearly stressed, remember executives who negotiated with him. They also remember “a great deal of shouting and swearing.”

They didn’t have much time to complain, though. Every day, as the clock ticked down to February 9, Jon Gray was asking Anthony Myers how close they were to a deal. Every day Myers worried they couldn’t get there. The Macklowes were still doing due diligence.

They’d come apart on the price. Roy March was on the phone to everyone, reporting back to the Blackstone executives on the Macklowe “body language,” reassuring them that even though it might not look like it, Harry Macklowe would close.

For a reason Myers never fully understood, Gray interrupted him two days ahead of the closing scheduled for Friday, February 9, and told him to march with him to the law offices of Simpson Thatcher. They were signing now. “Get your jacket; we are closing,” Gray said. Myers protested that the paperwork was not ready—not even close. There were so many outstanding items still to be resolved.

But he went with Gray down the street to the offices of Simpson Thatcher. The room was crowded with lawyers as well as all the expected players: both Macklowes, and Rob Sorin. Eric Schwartz was giddy. He said to Myers, “You realize that you guys have probably created about $150 billion of underwriting that’s going on simultaneously on the street right now.”

Myers said, “Yeah, I get it. I’ve been a little busy, but you’re right. That’s an amazing thought.”

The legal papers were produced for him and Billy to sign, and he got out his pen with a flourish. But then he stopped. He turned to his lawyers and said, “My name’s in here. Why’s Billy’s name not on the signature page? I want Billy to sign this as well. This is important.”

“Billy was tense, tired. Harry was calm. Something was off between them,” one person said.

A new page was printed and both Macklowes signed.

The monies got held in escrow accounts.

Back at Blackstone’s office it was “battle, battle, battle” to close out all the legal issues by the official closing deadline of 11:00 a.m. Friday.

That was when $39 billion had to be wired. And at 11:05 a.m. on Friday, Anthony Myers didn’t have signatures from Billy.

Forty-or-so bankers were due to simultaneously dial in and await the signal to wire their money. Federal regulations won’t permit more than $1 billion to be wired in one transaction, so Blackstone had arranged for the $39 billion to be broken up. But Deutsche Bank, on behalf of Harry Macklowe, needed to be ready with his wire at the same time. 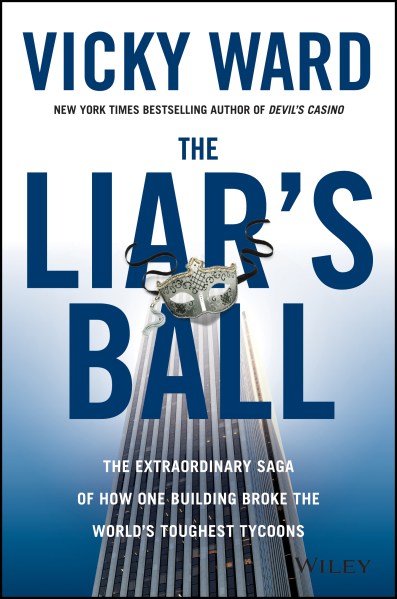 Jonathan Gray burst into Anthony Myers’s office. “Where the fuck is Harry?”

Myers called Billy Macklowe. “We’ve got 40 banks and $40 billion waiting,” he told him. “Why aren’t you on the phone confirming?”

Myers told Billy to tell Sorin the clock had run out.

The roll call on the phone began again.

“Deutsche Bank, are you there?”

This time they were there.

And the biggest leveraged buyout in history was done. 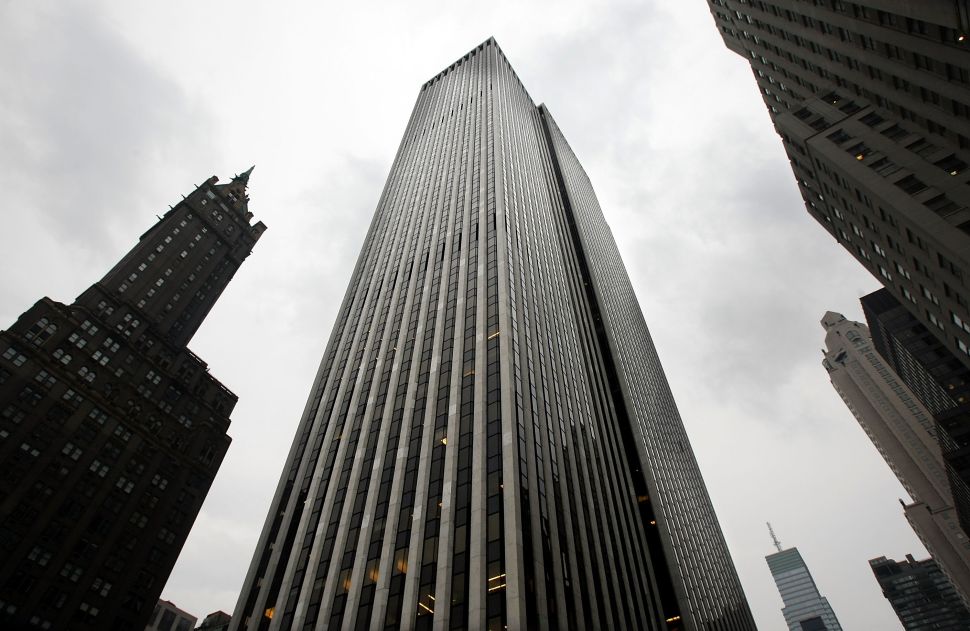