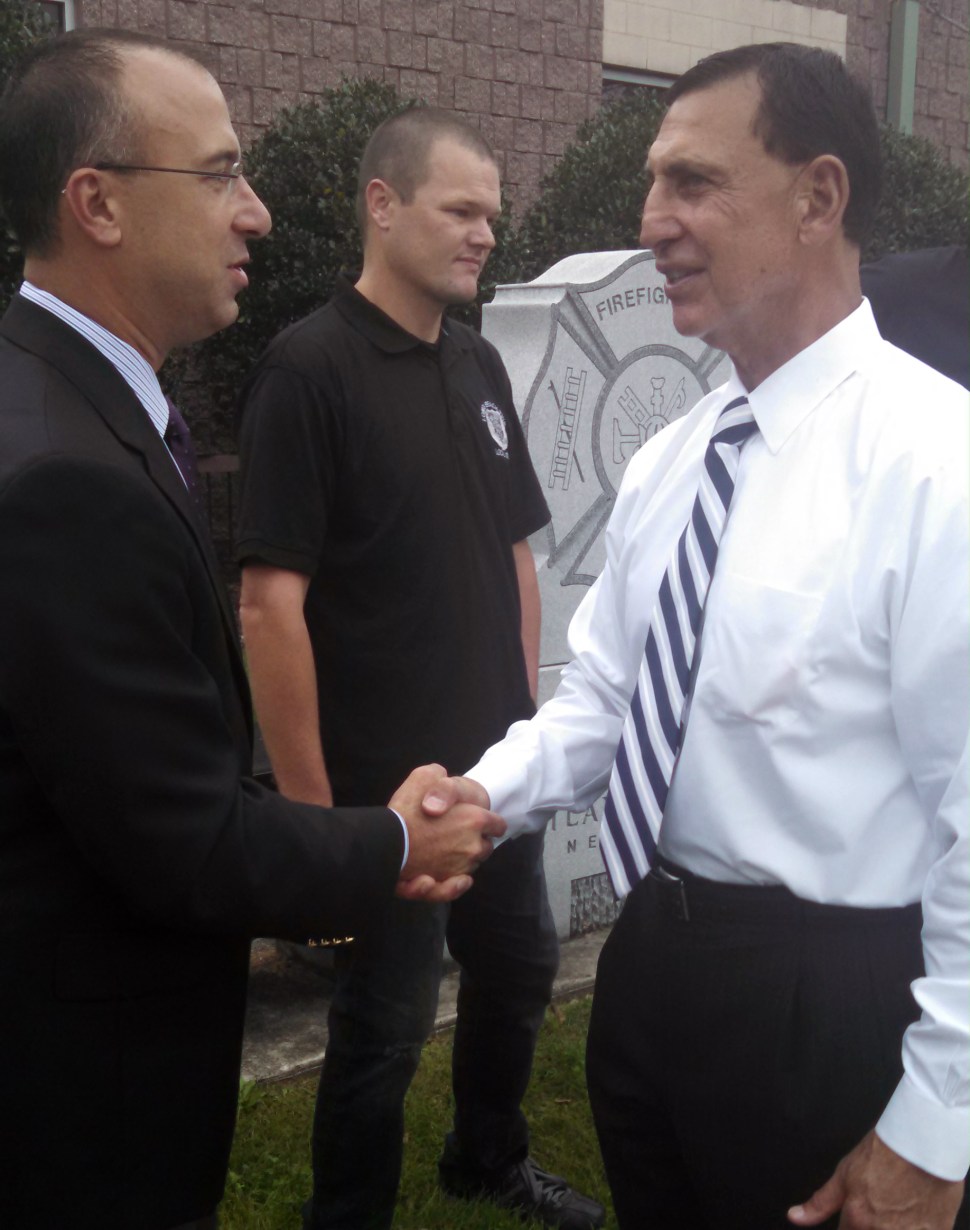 Lobiondo and Nixon of the state PBA.

EGG HARBOR – Joined by a scrum of law enforcement officers in the parking lot of the Tony Canale Training Facility here this afternoon, U.S. Rep. Frank LoBiondo welcomed an endorsement by the New Jersey State Policeman’s Benevolent Association — and exuded confidence at the prospect of re-election in South Jersey’s second congressional district.

“We are very pleased once again to have this PBA endorsement,” LoBiondo told PolitickerNJ during an informal interview with the Republican. “I’ve received it a number of times and I think it clearly demonstrates to those who want to pay attention that on issues of community safety, first responders and fire, that year after year I’ve been able to get their support — and it’s not because they like the color tie I wear, it’s because I’m supporting their efforts in the community.”

LoBiondo is seeking his 11th term in Congress against challenger Bill Hughes, Jr., a Democrat and son of Bill Hughes, Sr., a former congressman in CD2 prior to LoBiondo’s own tenure. While the race here has received comparatively less coverage than other, more competitive contests in the state — like the third congressional district race between Tom MacArthur and Aimee Belgard — attacks between the Hughes and LoBiondo camps have increased in recent weeks, with press releases from the Republican blasting the “crumbling credibility” of the Democrat and the Democrat taking to radio and local news stations to smear the Republican’s record on issues like the economy and Atlantic City casino closures.

In addition, recent polling in the district shows Hughes within striking distance — fueling hopes of a Hughes upset and drawing the attention of top Democrats in the state, including U.S. Senator Cory Booker, who faces his own re-election against Republican hopeful Jeff Bell. Hughes joined Booker and other top Atlantic County Democrats at a rally in Atlantic City earlier this week as part of a last ditch get-out-the-vote effort for the candidate’s cause.

But all that is noise to the 20-year incumbent, who said he has his head down with just under three weeks to go until election and expressed certain skepticism when asked about the Stockton University polling numbers, which show Hughes trailing the Republican by as little as six points.

“I get up every morning like I’m 10 points down, and I have in every race I’ve ever run in. And is that poll actually real? We don’t know, they won’t tell us did they sample registered voters, likely voters, how many Republicans, how many Democrats, how many Independents,” LoBiondo said of the Stockton poll. “But let’s say it is real. We at least right now are showing something totally different, the feeling on the ground is really good, but I understand you could have all the support in the world and if that support doesn’t get into the voting booth it doesn’t really mean anything. So I do like I always do — we’re jamming it in, ten pounds in a two pound bag.”

Hughes had some especially harsh words for LoBiondo at Tuesday night’s rally, blasting the Republican for failing to foresee and avoid the ongoing gaming industry collapse in Atlantic City, which includes the layoffs of some 10,000 casino workers. Hughes said predicting that debacle “didn’t take a rocket scientist,” and told PolitickerNJ following the event that LoBiondo “has gone for the photo op when what he should’ve done was something to help out the people of New Jersey.”

“Well, he went further than that — he blamed me for the loss of jobs,” LoBiondo responded today, noting that his union labor endorsements, from UNITE HERE Local 54 in particular, in the embattled city show otherwise. “The press of Atlantic City refuted that, and the biggest casino union, Local 54, who had the biggest impact with the layoffs has endorsed me, and said that I’ve stood with them year after year after year. So I think for what Mr. Hughes has to say, that I’ve been responsible for every ill in the western world for forever — Ebola is coming next … I think people are starting to see through this.”

LoBiondo said he puts more faith in his endorsements — which encompass today’s PBA support but also backing from US Chamber of Commerce and the National Federation of Independent Businesses — than polling numbers, saying he thinks he “might be the only person in congress who’s been endorsed by both organized labor and commerce.” He also touted the work he’s doing with other top pols in the state on finding a long-term solution to Atlantic City’s economic problems — including Booker, Senate President Steve Sweeney and Atlantic City mayor Don Guardian.

One question political observers in the state now have, following indications that the Democratic Congressional Campaign Committee, who began the cycle by backing Aimee Belgard in CD3, might soon desert their efforts there in the wake of widening margins between the Republican and the Democrat, is whether or not the national organizations will look to support other candidates in the state. Both Hughes and Democratic hopeful Roy Cho in north Jersey’s fifth congressional district have drawn closer to their incumbent opponents in the last leg of the races.

LoBiondo, however, seemed unmoved by the prospect of a last minute DCCC throw-in.

“Afraid isn’t a word I use. But when you go back to earlier press articles where Mr. Hughes first announced he promised to be top Democratic challenger pick up in the country. He was going to get all the support from the DCCC and all these outside sources,” LoBiondo said. “And you know, we have a couple weeks to go, so maybe there’s a surprise in the works, and that’s why I go so hard every day, because you can’t ever feel that you’re in a good spot, but none of that has materialized. And if he was the viable candidate that he touted himself to be, I think we would’ve seen a different scenario.”

For his part, Robert Nixon, director of government affairs for the state PBA, lauded LoBiondo on his work with the organization.

“The state PBA has for many years had a wonderful working relationship with congressman LoBiondo. At a time when Congress can’t seem to get anything done, the congressman has proved to us that he has the ability to bring Republicans and Democrats together to ensure that our police officers are getting the resources and manpower they need to do the job,” Nixon said. “Especially at a time when the economy was bad and municipal funding for police officers was low, we were able to go down to Washington, the congressman has come up to meet with us, to talk about federal programs he can push. So this was a no brainer for us and he’s been one of our strongest advocates for fighting for law enforcement officers.”

“In this instance it is no disrespect to Mr. Hughes at it is our respect for the experience that Congressman LoBiondo has had an our close working relationship,” he added. 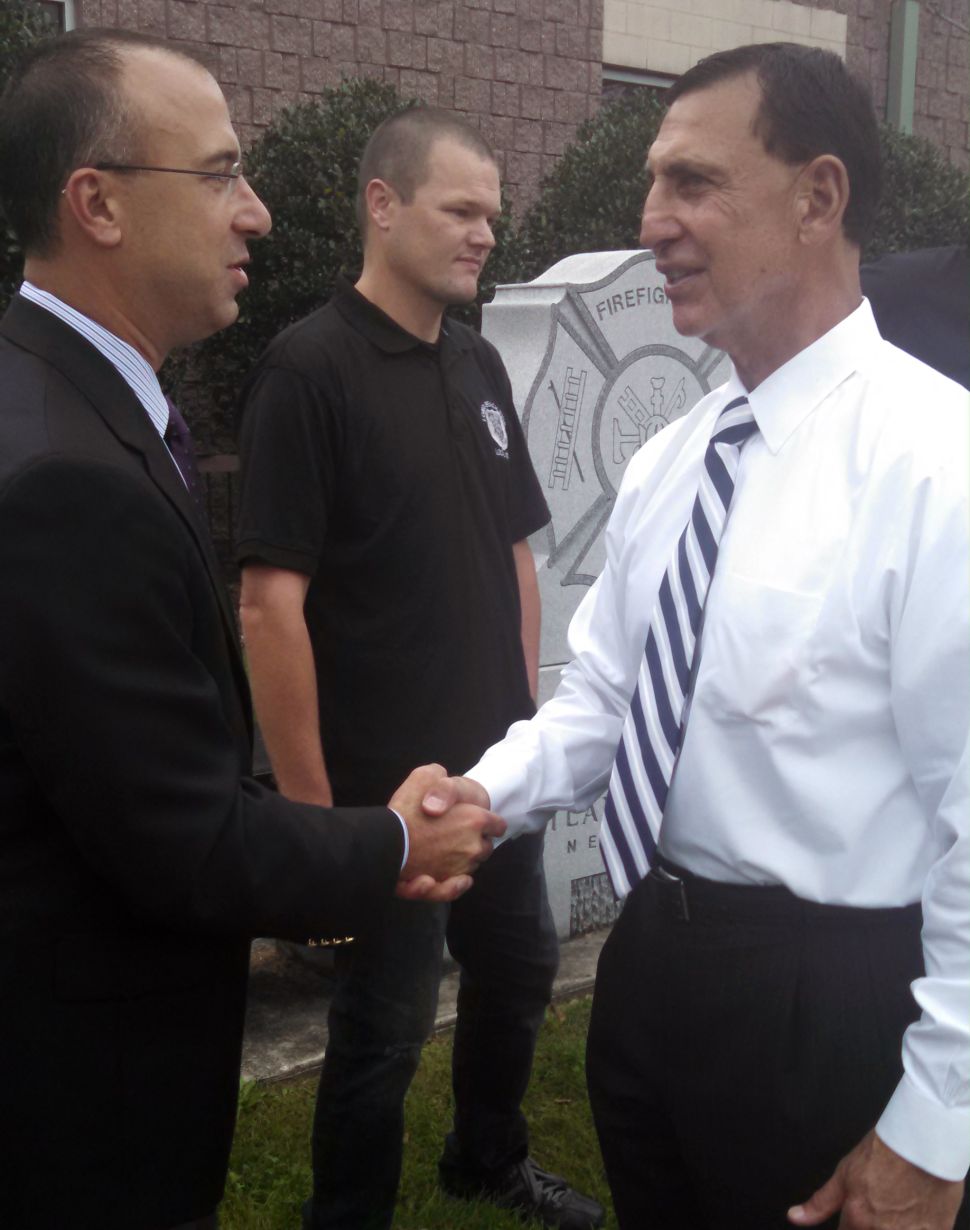