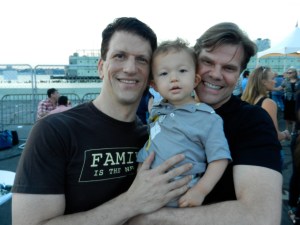 From left, Gary Spino, Nicholas Brown-Spino and Anthony Brown. Mr. Brown is chairman of the board for Men Having Babies.

It’s the worst nightmare for any father–missing the birth of your child.

But that’s exactly what happened to Anthony Brown and Gary Spino. The couple lives in the West Village, but, since New York state law prohibits surrogate reproduction, they had to conceive their son, Nicholas, with the help of a surrogate in North Carolina.

“We had a C-section scheduled, but the surrogate’s water broke early,” Mr. Brown told the Observer. “We had to drive nine hours for our son’s birth, and it turns out we were four hours late.”

Overturning New York’s restrictive surrogacy law is one of the main goals of Men Having Babies (MHB), the organization of which Mr. Brown, a family law attorney, is chairman of the board. Though the state was lauded for being one of the first to pass marriage equality, when it comes to family matters the picture is not quite so rosy.

Several members of the board of directors of MHB are in Albany lobbying for passage of the Child Parent Security Act, which would legalize surrogacy in the state.

Aside from advocating legal protections for surrogates, one of the organization’s main functions is to be “a peer support network for biological gay fathers and fathers-to-be,” MHB’s website states.

Mr. Brown knows well how valuable this peer support is–he, like every other board member, started his involvement with the group by attending one of their monthly workshops, which deal with particular aspects of surrogacy.

“We’re all alumni,” Mr. Brown said. “When we came in, the other members answered questions and allayed fears.”

Mr. Brown and the rest of the board will be on hand this Sunday, when 100-150 families are expected to attend the 10th annual Men Having Babies conference at the Manhattan JCC. The event, the largest of its kind on the East Coast, will feature seminars on surrogacy as well as private consultations with providers.

The number of resources available to gay families has dramatically increased in recent years, such that 30 service providers will be on hand at the MHB conference; in the event’s first year, only three providers showed up.

The conference will also spotlight the Gay Parenting Assistance Program (GPAP), MHB’s fund which gives financial assistance to gay parents through grants from the organization’s partners.

In the past year the fund has given $600,000 to pay the full expenses of nine individuals or couples who wanted to have a child. It also provided 30-50 couples with partial financial aid.

While Mr. Brown and Mr. Spino had a “guardian angel” for financial support (an elderly neighbor left them money toward a surrogate when she died), they realize their situation was “the exception to the rule,” and that financial assistance is necessary for many gay couples.

As such, Mr. Brown calls GPAP “the thing all of us on the board are most proud of.”

Once a couple has a child, MHB provides a Facebook page called Living the New Normal, on which dads can share their experiences and advice.

“You’re just like every other parent, but you still have your own gay male issues,” Mr. Brown said, spotlighting in particular the fact that children need a relationship with their surrogate mother.

This issue will be tackled from both ethical and emotional perspectives at the conference.

‘There’s an argument against codifying assisted reproductive law, because lawmakers believe the surrogate is being taken advantage of, or that she’s not an active part of the child’s life,” Mr. Brown said.

The event will tackle this misconception head-on, as a panel of teenage surrogacy children will take to the stage to share their experiences.

“I can’t think of one child who hasn’t fallen in love with his surrogate mom,” Mr. Brown said.

A panel like this would have been unthinkable a decade ago, when these kids (and the concept of gay surrogacy) were in their infancy. But for Mr. Brown, this just goes to show how much public opinion can change after 10 years.

Though MHB has a long way to go, Mr. Brown chalks up the fact that his organization is still going strong after a decade to a combination of advancements in medicine and the media, along with the increase in surrogacy options.

“The medical form of art has been perfected”, Mr. Brown said. “The breadth of the message is more widely received, and the market has blown open.”

The Men Having Babies Conference takes place Sunday, Nov. 2 from 9 AM-7 PM at the JCC in Manhattan, 334 Amsterdam Avenue at 76th Street. Admission is $10 per person in advance and $15 at the door. 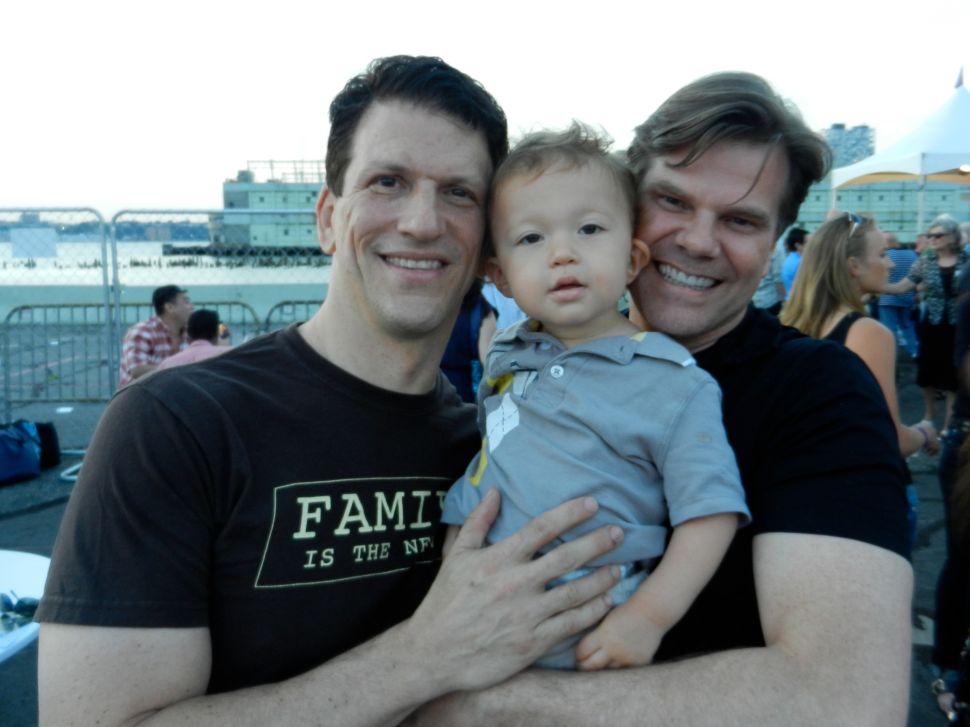