I have some serious anxiety about most things in life. So naturally, I walk out of most social interactions with the feeling that anyone I came into contact with was thinking horrible thoughts about me the entire time. This is why I’m so, so thankful I can’t read minds. Because if someone who appeared kind really was kind of an asshole, I’d rather just not know. I’m good not knowing.

Manhattan Love Story bases its entire premise on the idea that people really want to know whats going on inside people’s heads. It’s the story of Peter (Jake McDorman) and Dana (Analeigh Tipton), who meet in New York and (probabably, idk it’s just the pilot) fall in love. And lucky us we get to hear every thought that goes through their heads. Seriously, Manhattan Love Story must have been the most awkward show to film, because most of McDorman and Tipton’s acting cues are “make an inquisitive face while we insert narration.”

Which, okay, wouldn’t be so bad if these characters thought things that made them seem likable, or relatable, or I don’t know, compatible as two human beings in any way. But they’re not. In fact, in Jake’s case, he’s just sort of an asshole, and I don’t really want him to have get a (Manhattan) love story. We’re introduced to Jake in the opening scene. “Flathead” by The Fratelli’s is blasting, a song from 2006, so you know this is geared towards young, hip, New York-y types. Anyway, Jake is walking down the street thinking to himself which women he would or would not bang. Plot twist, it’s most of them, including a pregnant woman, because the pregnant woman large bewbs. You get the feeling that Jake bones mad chicks, dude — and you also get the feeling that Jake talks just like that.

Dana has just left everything she had in her small hometown to chase her dreams of working in publishing. “I left everything behind to move to New York and chase my dreams,” she actually says. That story has already been done about 12 million ways in Hollywood, and to much better effect in movies probably starring Hillary Duff or the Olsen Twins. Dana is quirky and confused, because New York is just such a big city and she’s just a small time girl.

Dana’s friend from college, Amy, who apparently is unaware of any of her friend’s personality traits, thinks it’s a good idea to set up Jake and Dana on a blind date. Amy is married to Jake’s brother David, whose only characteristic as of the pilot is that he really wants to watch his wife have sex with Dana. Or something. Thank god we spend no time in David’s head.

And so their first date goes predictably wrong in predictable ways, like Dana catches Jake looking at her bewbs, and Jake makes fun of Dana for making a New York bucket list. Reminder: Jake’s a dick. And throughout it all we get to hear what they’re really thinking, so even when the date looks on the surface to be going well, you get to hear all about how Jake is horrified that he saw Dana smell herself before coming into the restaurant. How dare she?

Dana ends up crying and leaving. Jake feels no blame.

So on it goes like that for 99% of the pilot, with Dana being just so overwhelmed by everyone in New York (also everyone, and I mean everyone, in New York is a douche, according to this show) and Jake being confused about why people don’t like him. Than, right at the end, Jake’s sister Chloe helps him to realize that maybe he should take responsibility for his actions. Chloe takes the place of me in this episode, mostly there to call Jake out on his bullshit. I like Chloe.

So what does Manhattan Love Story have going for it? Well Analeigh Tipton is just kind of likeable as a person, so you can’t help but root for Chloe most of the time. The problem isn’t with her, it’s with what the writers are giving her. I understand she’s not from New York, but does that really mean she doesn’t know how to work a smart phone or social media? Aw shucks how does this whole Facebook thing work? We don’t have it in my town. Which town? I don’t know, one of the small ones.

And one last note — for a show that has Manhattan in the title and is labeling this as a New York love story kind of thing, I’d like a little more effort to show that they do in fact shoot on location. Amy and David’s apartment is on a Friends level of ridiculously huge. Dana and Jake do end the episode at the Statue of Liberty, which is a bit obvious but for some reason is beautful enough to make Jake cry. On cue, we hear Amy’s thoughts: “Oh great. Just when I start to like him, turns out he’s gay.”

Oh great. Just when we started to like Amy, turns out she’s kind of a dick, too. 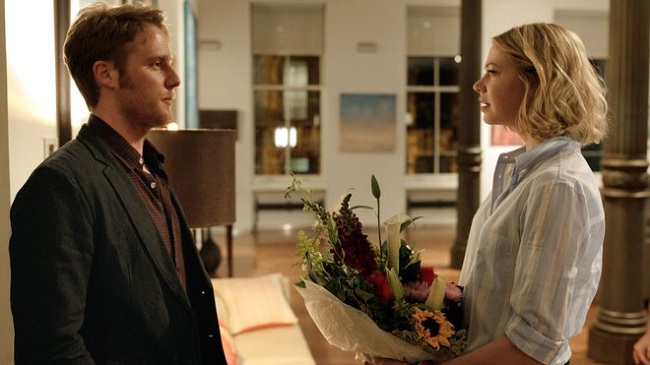