Council Speaker Melissa Mark-Viverito is pushing legislation to stop the city from honoring immigration detainers issued by the federal government unless they are accompanied by a judge’s warrant, her office announced today.

The speaker’s office cited recent statements from federal judges saying detainer requests, without warrants, from Immigration and Customes Enforcement are voluntary — meaning “municipalities that honor them may be violating the U.S. Constitution by honoring them” and holding someone without sufficient cause.

The proposed legislation — to be introduced October 7 — comes after the City Council has already passed legislation to limit the city’s cooperation with ICE, which often seeks to detain immigrants who have been arrested and wind up in the city’s jails at the end of their sentences, transferring them to holding facilities and eventually deporting them. Under current law, the city does honor detainer requests without a warrant, as long as the person targeted has been accused of a felony or certain misdemeanors.

Under the new law, the city’s police and corrections department would not honor any detainer request without a warrant — and even if there is a warrant, the departments would only honor the request if the subject was “convicted of a violent or serious crime” as the bill defines it, within the last five years, or is on the terrorist watch list.

“By further limiting ICE’s role in the detention and deportation of immigrant New Yorkers, we set the national standard for the treatment of our immigrant population. Families will no longer be needlessly torn apart by ICE’s dragnet enforcement efforts,” Ms. Mark-Viverito said in a statement. “We cannot allow for immigrant families looking for a better life for themselves and their children to be needlessly torn apart because of gaps in our laws.

Ms. Mark-Viverito is introducing the legislation along with Council Members Daniel Dromm, Rafael Espinal and Immigration Committee Chair Carlos Menchaca. The speaker, a native of Puerto Rico, has long been active on immigration issues — she’s been a strong voice in urging help for unaccompanied minor immigrants appearing in federal court in the city — and knocked the federal government for its inaction on immigration reform.

“As I’ve said before—if congress won’t act, then we must,” she said.

Mr. Menchaca said the law would close legal loopholes that lead to deportation.

“Under the leadership of our Speaker this bill will close that loophole so that immigrants and their families are not torn apart by a flawed system. This legislation will help end the separation of all families,” he said.

The legislation will separate immigration issues from criminal ones, Mr. Dromm, a former immigration chair, said, and lead to safer neighborhoods.

“Disentangling civil immigration enforcement from our local criminal justice system will make all of us safer by encouraging immigrant communities to report crimes and cooperate with investigations,” said NYC Council Member Daniel Dromm.

Mr. Espinal argued that ICE has “set up shop” in city jails.

“For years I have witnessed ICE set up shop in our city’s jails to prey on vulnerable immigrant inmates, who have served their time, and expedite them into federal detention centers. The victims are separated from their families and often times transported to states like Texas, and Louisiana, without due process of the law,” he said.

Ms. Mark-Viverito’s office also touted the praises of several members of Congress for the measure, including Congressmen Joe Crowley and Jose Serrano, and Congresswomen Nydia Valasquez and Yvette Clarke, all Democrats, as well as the praise of immigration activists. 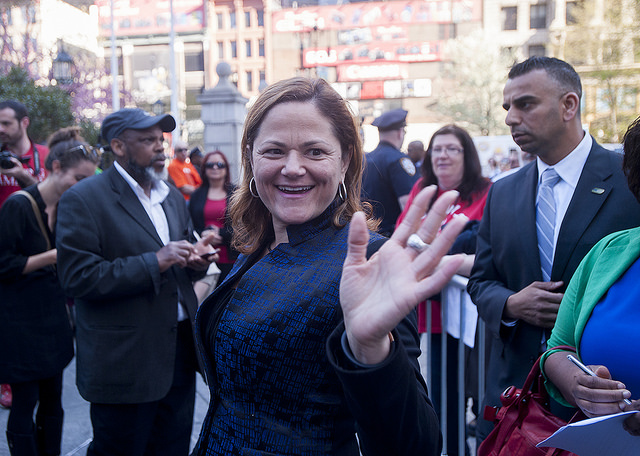