While Mayor Bill de Blasio has said he’s confident the proposed Astoria Cove development will offer “substantial affordability” in housing when it might have had none, Council Speaker Melissa Mark-Viverito said today she was supporting Councilman Costa Constaninides’ push for more low-rent units.

“We’re a collegial body. I, as the representative of a district, am very in tune with the needs of my constituents, and I would ask colleagues to be respectful of that — and to the extent we can be supportive to the council member and his continued expressions of concern, and ensuring that it’s heard, that’s what we’re doing,” Ms. Mark-Viverito told the Observer today during a City Hall press conference. “We’re lending the support and making sure that those who are applying for this development are also clear that they have to step to the plate and go further than where they are right now.”

Mr. Constantinides is not the only local pol opposed to the development in its current iteration — Queens Borough President Melinda Katz has also expressed disapproval, voting against the project during her phase of lengthy Uniform Land Use Review Procedure. But it’s Mr. Constantinides whose opinion perhaps matters most — the Council plays the largest role in approving such land use projects, and the 51-member body usually defers to the opinion of the member representing the district in which the project is located.

Still, that doesn’t necessarily mean the project is a no-go due to Mr. Constantinides’ current disapproval — the 30-day period the Council has to consider ULURP projects often features intense negotiations behind closed doors, something Ms. Mark-Viverito and Mr. de Blasio have each pointed out.

Large projects have often overcome major sticking points at the last moment after intense conversations between the council, the mayor’s office, and developers — such as the development of the New York Wheel and Empire Outlets, which had been in flux until the mall’s developer agreed at the last minute to use union labor. Of course, other projects don’t make it to the finish line, such as last year’s attempt at rezoning in Midtown East.

“We’re in the negotiating phase right now, so to speak,” Ms. Mark-Viverito said of Astoria Cove. “We had a hearing, the drop-dead date on which we have to vote on this is at the end of November. The Council member has been very clear in expressing the interests and the needs of his community, and he is in the process of having conversations to ensure that the application is doing, is meeting, those concerns. Those of us who have gone through it in the past know that in a a period of about two months we can get a lot discussed, at least a month, discussed.”

Thanks to new mandatory inclusionary zoning policies enacted by Mr. de Blasio, the project does include units deemed affordable. But Mr. Constantinides and others recently argued in a council hearing that making 20 percent of the units affordable is not enough — and that the rents proposed for affordable units are actually higher than market rates in Astoria.

Asked about the threshold for affordable units that would be acceptable in the project today, Ms. Mark-Viverito did not provide a percentage.

The mayor, meanwhile, signaled Monday that any level of affordable housing was better than what the development might have offered before and knocked those who have criticized the plans at this stage.

“No one should judge until the process is over … there will be affordability and it will be very substantial affordability at a site that might not have had any,” Mr. de Blasio said. “So I’m very satisfied that, one, there’s going to be affordable housing where it wouldn’t have necessarily been before; two, it’s going to be very substantial by the time this process ends.” 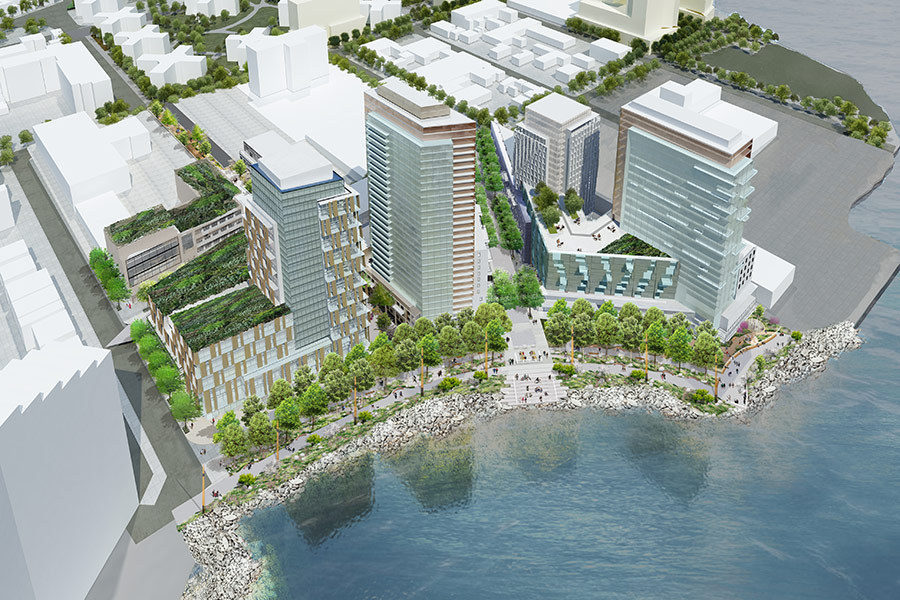