Rarely do institutional exhibitions elicit the depth of grief and tenderness articulated by “Robert Gober: The Heart is Not a Metaphor.” The 60-year-old artist’s first American retrospective is an austere but emotional force field, unusual from the jump.

The way into this journey through the artist’s singular career is past a white playpen bisected by black drainpipes—a red alert for the unsettling  exhibition to come. Hanging near it is a small, pastoral painting from 1975. It pictures the young Mr. Gober’s representation of his Connecticut childhood home. Everything that follows recalls a time in Mr. Gober’s life as a gay man born into a Catholic family, weathering the AIDS crisis and the 9/11 trauma, and living in the countryside outside of New York. But the exhibition also goes beyond other surveys to include recreations of entire gallery shows that the retrospective’s subject made as both an artist and a curator. Organized by Ann Temkin, MoMA’s chief curator of painting and sculpture, with assistant curator Paulina Pobocha, one nonetheless sees Mr. Gober’s guiding hand all over it.

Each of the 130 objects in the show is by turns banal, grotesque, morbid, precise and confounding. Several rooms are covered in wallpaper and set with furniture. None of it is what you would find at Ikea. An armchair is impaled by a drainpipe. A baby’s crib tilts at an angle steep enough to tip over. A candle is embedded with human body hair. And the logs “burning” in a fake fireplace are the still-shoed legs of children, fashioned out of wax.

The first room is typical in its one-two punch of the ordinary, the sincere and the ghoulish. It has two works on paper and three exacting sculptures of familiar objects: an empty closet, a paint can, and on the floor, jutting out from a wall, the shin of a hairy man’s leg with its pants pulled up above its shoe and sock to show its hair.

Then comes a gallery full of virginal white sinks. Made in 1984 of plaster, wood and paint, they look absolutely real but lack plumbing and fixtures. Mostly, they function as a melancholic response to the then-escalating AIDS epidemic, impossible to wash away and just as difficult to process. If the heart isn’t a metaphor for Mr. Gober, the sink certainly is. A stand-in for an imperfect human body—sloping shoulders, rounded belly, throat, anus and all—it was something pure to throw in the face of fear, a fathomable way to cope with the incomprehensible.

Since then, Mr. Gober has made more than 50 such sinks in various shapes and sizes. Each more twisted, stretched, unpacked or woven than the one before, they pop up throughout the show. Two bleakly comic examples are buried in grass on an outdoor terrace visible through a gallery window. Only the backsplashes protrude aboveground, where they suggest Halloween ghosts made of bed sheets with sight holes cut into them.

A dollhouse church whose lifted roof reveals an interior ruined by a deluge is only one of several references to Mr. Gober’s Catholic upbringing and secular faith now. But the atmosphere of the entire show feels prayer-like, even a white-on-black room where the walls are pocked by sink drains and covered by a pattern of hand-drawn, male and female genitals. (The penises are larger.)

That is only one of several immersive environments in the Gober universe, where viewers may find themselves alarmed by content while marveling at craftsmanship. (Everything is handmade.)

Another wallpaper features a white man asleep in a small bed who appears to be dreaming of a black man hanging from a lynching tree. Hand-painted kitty litter bags line the walls, surrounding a mannequin dressed in a wedding gown custom-tailored for the artist. An enormous cigar sits like a brown torpedo-phallus at the center of another installation, where three partially clothed, male wax figures with candles affixed to their legs lie prostrate against walls papered with the image of a glorious birch forest.

These abrupt shifts of emotional gears prod the mind, surprise the eye and—the show’s title notwithstanding—poke at the heart, where darkness is always waiting.

They also prepare viewers for the show’s recreation of Mr. Gober’s 1992 exhibition at the old Dia Center in Chelsea. The installation has three rooms. A wraparound mural depicting a dense, Long Island forest covers the walls of the central space, where a deep blue sky is visible between the prison bars on high windows. There are sinks here, only now they have working faucets. Under the sinks are boxes of rat bait, sculptures that are almost indistinguishable from the real thing. Scattered here and there, and around the two dark antechambers on either side of the verdant cell, are neatly bundled copies of The New York Times. Also dutifully made by Mr. Gober, they reprint actual stories but also include ads for wedding gear modeled by the artist.

You may want to laugh. Try it. No sound will come. In fact, the ideal way to see this show would be in a meditative silence. Given MoMA’s crowds and abysmal acoustics, a visitor would have to be very lucky to find a suitable hush.

I was lucky. The galleries were quiet and I was alone with my thoughts, and my pulse. Approaching the last room, I heard the sound of a waterfall. Indeed, was gushing out of a headless Christ figure pinioned to a wall between two doors, each open just a crack. Through each, the bent legs of a man in a bath and a newspaper thrown to the floor are all that’s visible.

Part of a 2005 exhibition that Mr. Gober made after September 11, 2001, the room also has Gober-made copies of black-and-white pages from the Times, all dated September 12, the artist’s birthday. Each bears a drawing in colored pencil of two male bodies, embracing. The room suggests a chapel, with flaccid pieces of black rubber on concrete blocks where pews might be. It’s shattering.

If “The Heart is Not a Metaphor” is about any one thing, it’s memory. Not just childhood nightmares or fantasies but adult anxieties and, most of all, recent history—both Mr. Gober’s and ours.

Best not to escape it. 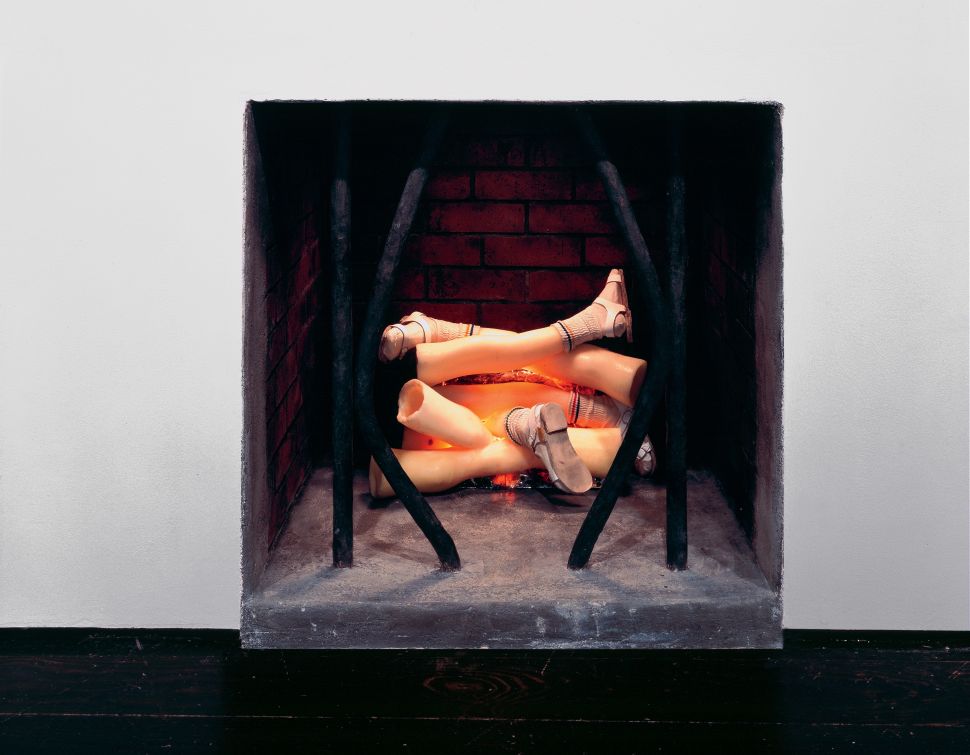