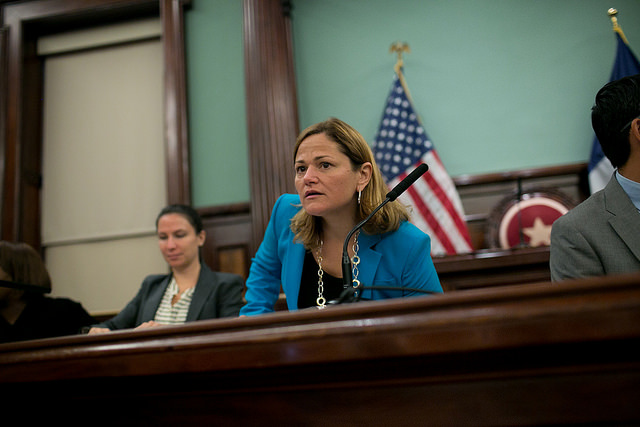 Melissa Mark-Viverito, the City Council speaker and a proud Democrat, is striking back against a pair of Staten Island Republicans who knocked her as a “socialist” to the “left of Mao” at a recent campaign rally. Ms. Mark-Viverito, through a spokesman, derided an assemblywoman, Nicole Malliotakis, as a “back-bench” legislator and called attention, once again, to Congressman Michael Grimm’s 20-count federal indictment.

“Considering the amount of spare time it must take to run up a 20-count federal indictment I don’t expect that Mike Grimm would also have the time to come up with an original political attack — but I do expect more creativity from the back-bench Assembly Member,” Eric Koch, a spokesman for Ms. Mark-Viverito, told the Observer.

At a campaign rally for Mr. Grimm on Saturday, the two Republicans ripped Ms. Mark-Viverito, along with Mayor Bill de Blasio, as dangerous liberals supporting the candidate trying to unseat Mr. Grimm, Democrat Domenic Recchia Jr. Though neither elected official has formally endorsed Mr. Recchia, a former Brooklyn councilman and ex-colleague of both pols, the mayor lent a key staffer to Mr. Recchia’s campaign and the speaker held a fund-raiser for the Democrat.

In the Staten Island and Brooklyn-based district, where President Barack Obama has prevailed but many conservatives resent Mr. de Blasio and the liberal power in the City Council, Mr. Grimm has repeatedly bludgeoned Mr. Recchia for his ties to Mr. de Blasio and even Ms. Mark-Viverito. The election is one week away.

“I do agree with Nicole that the speaker–I would say she’s to the left of Mao,” Mr. Grimm told the Observer on Saturday, referring to the 20th century Chinese Communist dictator, Mao Zedong. “She does not represent the traditional values that made our country great. She wants to give our city away.”

Reaction from the Grimm and Malliotakis camps after Ms. Mark-Viverito’s jab was equally fierce. Ms. Malliotakis, who sits in the minority and is one of only two Republican assembly members in the city, ripped Ms. Mark-Viverito for passing legislation that stopped the city from cooperating with the federal government in detaining and deporting undocumented immigrants and for allegedly not covering her heart during the Pledge of Allegiance at a 9/11 ceremony.

“The Speaker just passed legislation that would protect violent criminals and those on the terrorist watch list from deportation,” Ms. Malliotakis stated. “Let’s not forget that she also attended 9/11 ceremonies and didn’t have the respect to cover her heart during the Pledge of Allegiance. As the daughter of a Cuban refugee, I know socialism when I see it.”

Mr. Grimm, defending Ms. Malliotakis, said it was “no surprise” they were being “attacked” by a “radical, ultra-progressive like Melissa Mark-Viverito who despises and opposes everything they stand for.”

“It’s also no surprise that one of her top advisers is now steering my opponent’s flailing campaign…just further proof that he’s completely out-of-touch with the people of this district and that he’ll be just another puppet for Mayor de Blasio, Speaker [Mark]-Viverito, and the rest of the City’s left-wing establishment,” Mr. Grimm stated.