UNION CITY -The U.S. Senator, moments after delivering a fiery oration about failed Hurricane Sandy recovery efforts in New Jersey at a press conference this afternoon, was shuffling back to his black SUV when he was forced to wonder aloud about the future of a fellow Latino official also present at the Democratic star-studded event.

“You’re not a huge fan of the Castro’s, Raul and Fidel,” PolitickerNJ asked Bob Menendez, the son of Cuban immigrants and New Jersey senator whose disdain for his native country’s government and its reigning dynasty has become notorious. “Does that make Julian a non-starter for you on a national ticket?”

“You know, this is the only Castro I like,” Menendez laughed, peering across the street at Julian Castro, the newly-minted U.S. Housing and Urban Development Secretary who stood just out of earshot amid a crowd of residents gathered on the street to listen to both officials talk about ongoing, post-Sandy aid distribution. “He’s an excellent secretary, he’s an excellent public servant, and he could go as far as he wants.”

The comment, offered from one prominent Latino officerholder to another, carried little weight in the very early stages of national 2016 presidential politics. But it could shape up to have real import when that election cycle gets closer, especially if the wish of many prominent Democrats, including the wishes of Menendez and Castro themselves, comes true: that Hillary Clinton mounts a bid for the party’s nomination.

And, of course, wins.

Both Menendez and Castro — one a hardened veteran of Washington’s political circuit and the other a fresh-faced former mayor from the Southwest only recently inducted as an Obama cabinet member — increasingly find themselves on the short list of potential Clinton cabinet candidates, thanks to their standings in the party but also their statuses as high-profile Hispanic leaders in Washington. In an election year where the Democrat nominee could face a tough challenge from a strong Republican candidate, and with Latinos a growing part of the national electorate, political observers agree either would make a valuable asset to Clinton’s political team.

Castro’s trajectory has been well-documented. An even-keeled, Mexican-American politician who spent the majority of his career heading up the nation’s seventh largest city of San Antonio, he’s become somewhat of a rising star in the Democratic Party, giving the keynote speech at the Democratic National Convention in 2012 and moving into HUD this summer. His name is routinely circulated as a possible Vice President on Clinton’s ticket, and the former first lady has actively courted Castro and his identical twin brother, Texas congressman Jaoquin Castro, even as she continues to mull a presidential bid.

Plans for Menendez in a Clinton presidential strategy has been discussed less, but he too finds himself primed for an upward path should the opportunity arise. Having begun his political rise in Hudson County, now serving on the Senate Foreign Relations Committee, Menendez has enjoyed a longstanding alliance with Clinton. Sources say the senator had been quietly tapped for Secretary of State when Clinton ran for the Democratic nomination in 2008, but lost the position to John Kerry when President Barack Obama won out instead — though insiders say Menedez’s team is amping up again ahead of the next contest, this time with Clinton as the party favorite.

The pair’s meeting yesterday, though primarily having to do with the state and federal governments’ continued response to Hurricane Sandy two years after the storm made landfall, was another early presage of these developing relationships. With Clinton likely to face pressure to select a Hispanic running mate, particularly given her possible competitors — which include two Republican Latino presidential candidates, Sens. Marco Rubio (Fla.) and Ted Cruz (Tex.) — Menendez and Castro may find themselves standing on a similar, albeit more prominent, stage together in the future.

Indeed, Menendez himself has stressed the need for the Democratic Party to work to capture the Latino vote in future elections, telling PolitickerNJ this week that “the road to the White House comes through El Barrio.”

“That’s why the Republicans will have such a hard road to the White House, but Democrats cannot take the community for granted,” he said. “While [Latinos] are unlikely to vote Republican, they are very capable of staying home. And when [Latinos] stay home, we’re the ones who get hurt.” 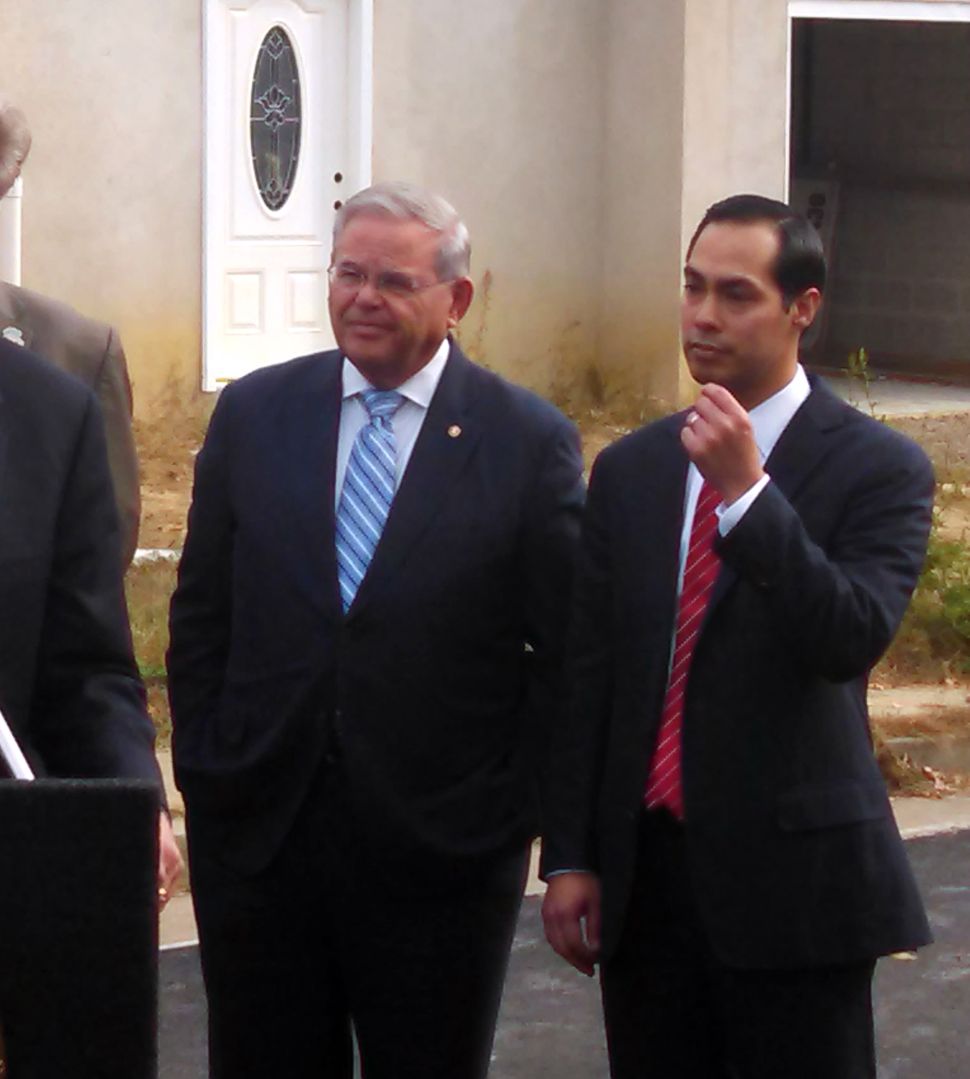