As an immigrant, “my family’s survival was based on giving up ownership,” explained art collector Mera Rubell, at the Brooklyn Museum Wednesday. At its 12th annual Women in the Arts Luncheon Wednesday, the museum honored contemporary art collector Rubell and her daughter, artist, Jennifer Rubell.

The Rubells along with Catherine Morris, curator for the Elizabeth A. Sackler Center for Feminist Art, took the stage for a conversation before lunch. The trio of women wore jet black which could have been an art installation in itself–they visually popped on a stage of honey-blonde hues. But the afternoon was full of color.

The Rubell Family Collection was established in 1964 by Mera and her husband Donald.  Alongside  a business of boutique hotels, they built “one of the most important private contemporary art collections,” said Brooklyn Museum board president Stephanie Ingrassia, by way of introduction. They were early champions of young struggling artists like Keith Haring and Jean-Michel Basquiat. The collection now occupies a 45,000-square-foot museum-quality facility in Miami, and they’ve staged 20 years of often ground-breaking exhibitions.

For their 50th wedding and collection anniversary, the Rubell family is publishing a 700-page catalogue featuring 250 artists, “Highlights and Artists’ Writings.” Alongside this effort, the Rubells have commissioned works by artists including Jeff Koons and Cindy Sherman–all in time for Art Basel, Miami, 2014.

On stage, Mera Rubell credited her husband in the audience for having, “the collecting gene.” She and her young family visited unknown artists in their flower-district storefronts (not studios), about 30 every weekend. They devoted 25 percent of their income each week, about $25, to five artists. (She talked of a very different art scene years ago where, “everyone smoked.”)

One of the perks of collecting? Mera described an evening when Jeff Koons showed up for their après Whitney Biennial party on the wrong night. Mera invited Koons in for pasta. His thank you gesture was an inflatable flower.

The family had one rule of business: “We made a deal; it was written in blood, if we were were gonna collect, there had to be consensus,” said Mera. So it was fun to witness non-consensus in the form of the occasional mother/daughter spar.

Jennifer, who “grew up inside the dynamic of collecting” with a living room crowded with work by Julien Schnabel and Keith Haring, to name a few, rebelled when it came to her own interior space. “My parents refused to put anything in storage.” Her bedroom had a “carpet, bed and Allen McCullom surrogates on the wall.”

Mera then reminded her daughter, “how about when you rebelled against the way I dress?” To which Jennifer countered, “a skin-tight parachute jumpsuit to teachers conferences was a legitimate complaint.”

In terms of Jennifer’s own emergence as an artist, she explained that as a child of an art collector, the bar is high. “The work I’ve been interested in doesn’t fit neatly inside the definition of art.” Some of her early work, as a child, was leaving anonymous love letters on the pillows of her parents hotel guests. “To me it was art, to the hotel it was stalking.”

Currently, Jennifer expresses herself through the medium of food. “She has a deconstructed approach to feeding a big group…where the artwork creates a social environment in which people participate in a social activity,” said Ingrassia. One example is what she created for a Brooklyn Museum gala which included an Andy Warhol piñata filled with dessert and urinals dispensing champagne.

Jennifer summed up the Rubell family experience like this: “Growing up in my family, there was a lot of love and a lot of art.”

As for the love of Brooklyn, “It turned out to be a critical place in my life,” said Mera who was educated at Brooklyn College and Long Island University. The Brooklyn Museum and the Botanical Gardens “were the places my family hung out every Friday and Saturday…who would think that here we are today.”

This is the second year in a row the Women in the Arts award was given to a mother and daughter pair. Last year the recipients were Girls creator Lena Dunham and conceptual artist Lori Simmons.

“Next year we’ll have to go back to a single honoree,” museum director Arnold Lehman was overheard saying. “There aren’t too many mother/daughter teams who can compete.”

All proceeds from the luncheon, which was held on October 22, will benefit programs for the Elizabeth A. Sackler Center for Feminist Art and the museum as a whole. 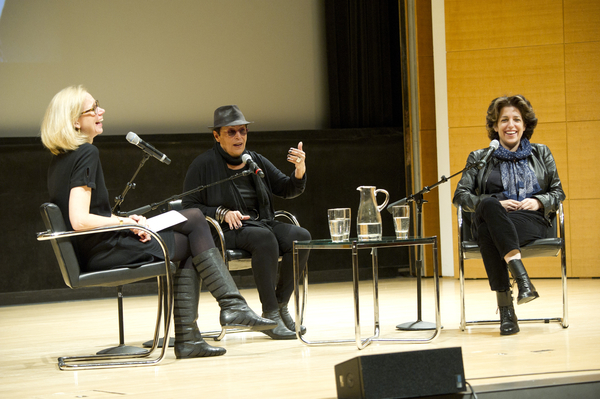