Guy Molinari had a story to tell.

The de facto king of Staten Island politics, now 85, eased himself out of a wheelchair on Saturday, bracing his frail body against the stage of the quaint New Dorp Moravian Church.

“As I pulled up here today, I was reminded about how important this is because a truck pulled up with Recchia signs all over it,” Mr. Molinari, a Republican former congressman and borough president, said at a rally for his protégé, Congressman Michael Grimm. “He says, ‘Guy, how are you.'”

The GOP power broker was just one of several Staten Island Republicans, including Councilman Vincent Ignizio and a pair of assembly members, to take the stage at the Staten Island church to boost Mr. Grimm and decry his rival, Democrat Domenic Recchia Jr., and all the former Brooklyn councilman allegedly stood for. The rally–eagerly promoted by Mr. Grimm’s team with a little more than a week to go before Election Day–filled the small church with several dozen die-hards, who nibbled on soft-baked chocolate chip cookies and frosted mini-doughnuts as politician after politician did their best to impersonate the fire-and-brimstone preachers of old.

Mr. Recchia, despite Mr. Molinari’s caustic words, was otherwise rarely mentioned by name: rather, the specter of a surging “far left,” led by the likes of Mayor Bill de Blasio and President Barack Obama, was repeatedly decried as Mr. Grimm and others warned of a liberal Rubicon on the verge of being crossed. Nicole Malliotakis, a Republican assemblywoman, called the City Council speaker, Melissa Mark-Viverito, a “socialist.” Mr. Grimm all but concurred, grousing that the de Blasio ally is “to the left of Mao.”

“The Democratic Party has been trying to pull the wool of our eyes this whole time,” Mr. Grimm, swaggering in front of his gaudy campaign signage, said. “The reality is very simple: the far left, the liberal progressive movement, knows that their policies are failing. The liberal progressive movement knows that people are starting to pay attention–they realize that President Obama’s policies, they’re not just bad policies, they’re dangerous policies.”

Mr. Grimm faulted Mr. de Blasio for a rising homeless rate in the city, fuming that “tax-and-spend” liberals mistakenly believe government programs can solve social ills. “The reality is, with President Obama in the White House and Mayor de Blasio here in the mayoral seat, we have reached the point where we cannot continue down this road. We are at a crossroads.”

“Either this country is going to rise up and the American dream is gonna be for everyone and that dream is about an opportunity, not a guarantee,” Mr. Grimm continued. “As we get mired down in debt and government programs that we can’t afford and this ideology that says the government is an answer to everything–guess what, by that very nature, we give back our freedom.”

Mr. Grimm, despite trailing Mr. Recchia in fund-raising and facing an indictment on charges related to a restaurant he managed before he was elected to Congress, still led in a recent poll and appears well-positioned to win re-election. While national Republicans and even some local ones desert Mr. Grimm, others like Mr. Ignizio are closing ranks around the controversial pol.

“It’s now time that we tell the journalists to sit down and we tell the people to stand up and come out and vote for who you want to be the next congressman,” Mr. Ignizio, normally mild-mannered, practically shouted. “We see a tidal wave coming down this country of Republicanism because they’re rejecting the policies of President Obama. Because they’ve rejected the State Senate and U.S. Senate. They will flip to be Republican and why? Because we have the better message, we have the right message for the United States of America.”

To inject a little levity into the rally, Republican Assemblyman Joseph Borelli ambled on the stage with his English bulldog. Before speaking, he asked the dog, named Winston, to sit. He would not.

“That dog’s a liberal!” one man in the crowd shouted.

Mr. Borelli, grinning, insisted that was not the case. 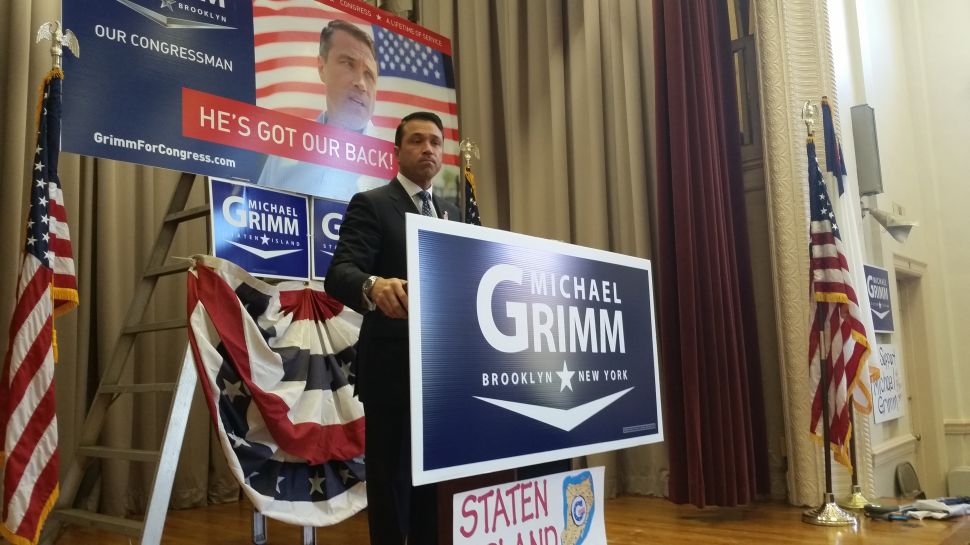