An unrecognizable Michael Keaton seems to have aged 40 years since the last time he appeared on the screen, but he’s still the best (i.e., only) reason to suffer through a miserable load of deranged, deluded crap masquerading as a black comedy called Birdman.

Mr. Keaton once played Batman, so maybe he’s perfect for the role of Riggan Thomson, an actor whose career in idiotic action movies about Birdman, a flying comic book superhero who wears ill-fitting Halloween costumes, has tanked. Humiliated and desperate to be taken seriously, he turns down Birdman 4, moves to New York and tries to redeem himself by mounting a Broadway play with his own money. The play he’s adapted is Raymond Carver’s What We Talk About When We Talk About Love, which he’s also directed and starring in with another Hollywood star seeking respectability (Naomi Watts, who is making more movies these days than James Franco, and not always the right ones). His comeback is sabotaged by roadblocks from the get-go, but the night before the first preview, his male co-star drops out after being knocked unconscious by a mysterious flying object and another demented Hollywood refugee from the set of Bates Motel (Edward Norton, in the most embarrassing role of his checkered career) takes over the role.

This manipulative maniac’s stardom is good for the box office but disastrous for the play, which is suddenly being lodged in hell by a lunatic quartet from the Hills of Beverly. Enter Riggan’s daughter, Sam, fresh from drug rehab (Emma Stone), his off-again, on-again lover Laura (Andrea Riseborough, who once played the Duchess of Windsor, directed by Madonna, so as a smart judge of movie properties, she rests my case for me), and his ex-wife Sylvia (Amy Ryan). To make the skin crawl, Zach Galifianakis is also on hand as his frenzied lawyer-producer. Never have I seen a group of actors who look more collectively like they’ve dropped into the middle of the Mojave Desert in the middle of August wearing nothing but their underwear.

Losing what’s left of his reason, Riggan consults the voice of his movie alter ego, Birdman, who instructs vases to move at will and objects to smash into an actor’s head. Mr. Norton’s character wrecks the first preview by guzzling gin onstage instead of and doesn’t even know what play he’s in (“Can we not get hung up on learning lines?” he sniffs). His girlfriend announces she’s pregnant, and his daughter deflates his ego further by blaming his downfall on his resistance to Facebook and Twitter (the only intelligent thing in his favor, if you ask me). The night before opening, in the middle of the final press preview, Mr. Keaton gets locked outside the theater before the last act half-naked and is forced to jog through Times Square in his Jockey shorts.

It’s supposed to be a comedy, but Birdman is directed by the usually brilliant Alejandro González Iñárritu (Babel), who knows nothing about the subject. The result is a train wreck without a shred of continuity, a hashtag that doesn’t even get the geography right. The action takes place inside a real Broadway theater, the St. James, which is a musical house on West 44th St. But when they leave the stage door, the actors are next door to the Edison Hotel, which is actually on 47th St. It’s a mess, unstructured and throwing itself all over the place in one hysterical scene after the next. The silliest character of all is an evil dill pickle of a critic (Lindsay Duncan) from The New York Times (at least they can’t blame this one on Ben Brantley) who destroys plays without even seeing them, composing her venom in a bar down the street.

Mr. Keaton wears himself out trying to bring home the truth that a goose can never be a peacock, but everything else eludes me. Some of the critics who embrace this kind of stupidity claim that Birdman pretends to say something witty about the perils of celebrity, fame, stardom, success and failure, not necessarily in that order, but I can find nothing good to say about any shard of the pretentiousness on view here. In the end, Mr. Keaton gives up completely and levitates. Then he dons his Birdman suit and flies through the canyons, above the traffic and over the bridges and rivers of Manhattan. At last we know the only way where being Birdman pays off. You don’t have to head for JFK to get out of town. You can fly back to Hollywood all by yourself. 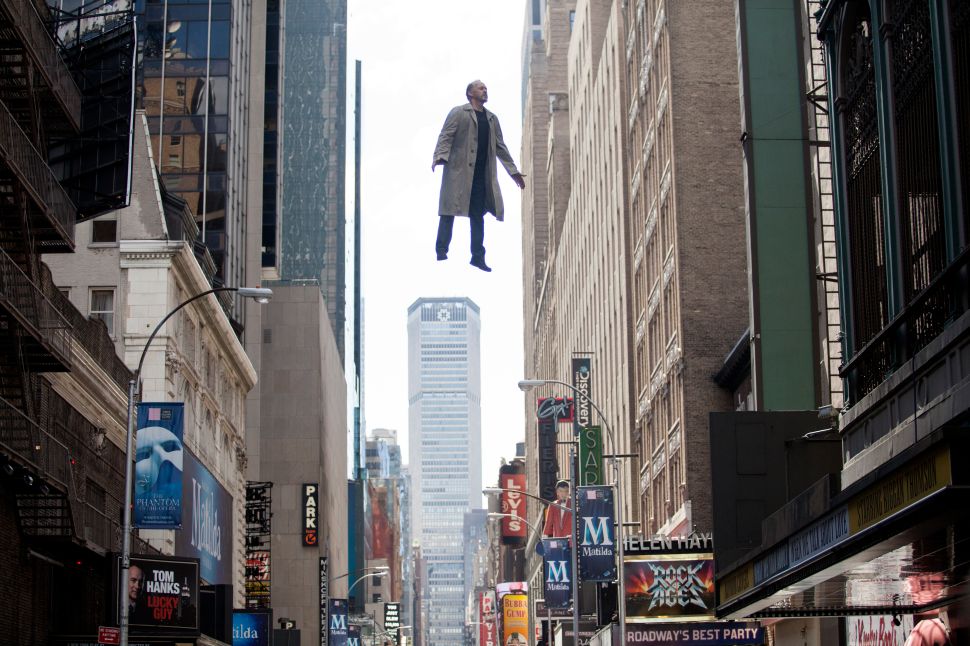