Do you wake up every morning and thank God for your surname? No, it’s a fucking drag to be called Mick Rock. You think to yourself, “Oh, shit.” It caught me in a bind from early on.

Why? Well, I was bound to do something in rock and roll. How was I going to avoid it?

You’ve photographed Daft Punk, and got to meet them with their helmets off. What do they look like? They’ve got this aura based on the fact that nobody knows anything about their private lives. They’re just two skinny little French guys: totally nonaggressive, very sweet, quiet, a little bit shy—until they hit the stage with their suits on and they become monsters. Monsters in the high art sense.

You did LSD with Syd Barrett. Did you photograph him high? No, I’m not sure if that would have worked, although, on one of my earlier trips, with this young lady, I did take some photos on the back lawn of Cambridge—can you imagine me at Cambridge University? I picked up this mate’s camera—I couldn’t afford one at the time—and it intrigued me.

Do you feel like the photos came out badly because you were on acid? It’s too early in my development for me to judge anything. But I would say that predicting the results is very difficult, so if you want to get something within a certain boundary, you might ixnay on the LSD. Now, I haven’t taken LSD in over 40 years. I did what I needed to do, and it transformed my motherfucking brain.

Of all the photos you’ve taken, which one is your favorite? Listen, I don’t mind it at all, and I’m used to it, but everyone always asks me this. And I have a cute answer, but it’s a bit wriggly: it depends on the day of the week, the week of the month, the month of the year, or whether or not I’m having my period. Men have periods too, don’t they? There’s no blood oozing, or none of that shit, but they do, because the pull of the moon does affect us.

Your Bowie portrait, where he’s looking in the mirror, feels almost beatific. That was very early on in his career, for this men’s magazine called Club International. When David saw the picture, he said, “Mick sees me like I see myself,” and that was really the shoot that cemented our relationship. We’re doing another Ziggy Stardust book—half of it previously unseen photos—which is coming out this spring.

Is Bowie easy to photograph? Of course he’s easy. It’s like having a cup of tea. You’ll throw him a line or two, and he doesn’t need a lot of direction, but he won’t fight it. It’s all instinct. And it was always that way. I mean, look at all the photos of him, all these amazing pictures.You’re going to get a great shot because he’s David Bowie. 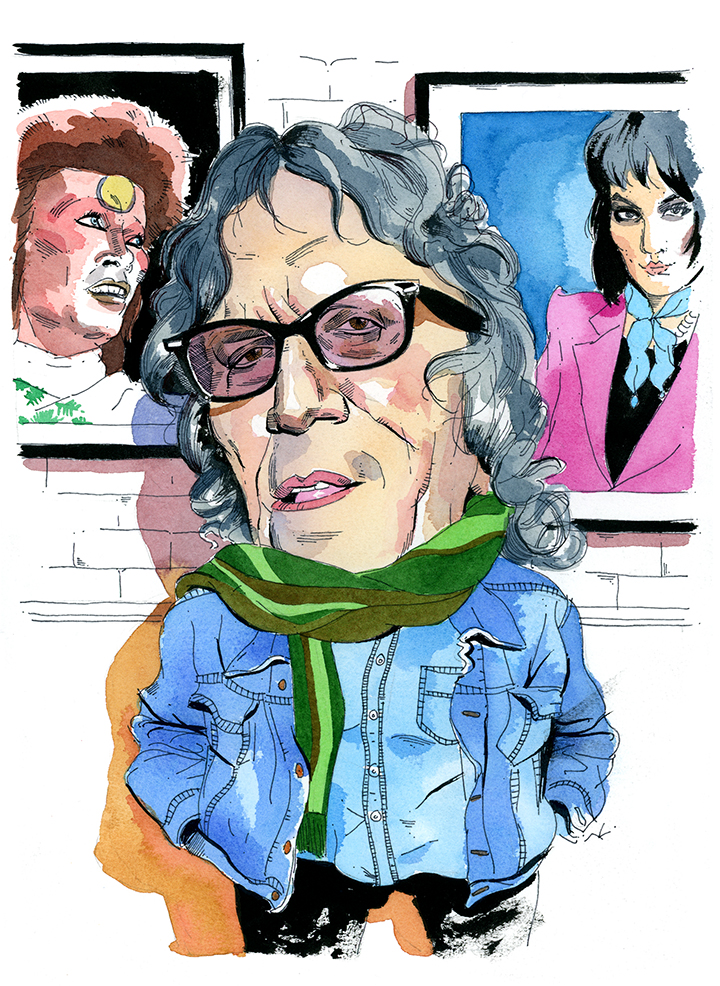