Written and directed by Damien Chazelle, the rough, tough Whiplash was tagged by one wag, in it’s unveiling at the recent Toronto International Film Festival, as “Full Metal Drum Kit.” The action unravels in a different kind of battlefield with a different kind of enemy, but remains a tribute to the invincible spirit of one individual who stands up for his convictions against overwhelming odds. This time the protagonist is an earnest jazz musician studying in a world-renowned music school (played by star in the making, Miles Teller), and the hill that looms between him and victory is a hard-assed instructor (J.K. Simmons) hell-bent on destroying his drive, self-confidence and professional future. The question is: how much should one talented but sensitive individual be willing to suffer for his art at the hands of one brilliant but terrifying bully? The two stars are fully committed to the concept that the pursuit of perfection doesn’t always triumph, and the film pounds in the temples with the feverish tempo of a jazz riff.

A drum prodigy whose ambition is to be another Buddy Rich, Andrew Neyman is a first-year student at an elite Manhattan music conservatory. Further driven to succeed by the failure of his father’s own writing career, Andrew impresses everyone who hears him play, including Terence Fletcher, whose own failed music career has turned him sour and resentful of promising kids with potential. So he promotes the aspiring young drummer to a coveted position in the school’s competitive jazz orchestra, at the same time pushing the kid physically until his drum sticks are literally dripping with blood and torturing him mentally until his sanity reaches the cracking point. His teaching methods are so terrifying that at one point Fletcher literally slaps the boy’s face in tempo and throws a chair at his head. Most students would throw in the towel, but in his obsession to become one of the greats, Andrew keeps coming back for more.

Between the technicalities of music composition and its flaws in human character, Whiplash doesn’t give the viewer much to hang on to, but as the band moves from one competition to the next, the music gets better and more profound. This is the pulsating stuff that made Stan Kenton and Woody Herman famous, and to think the same pyrotechnics are the force behind modern music education is a thrill rarely encountered in the rock cacophony of today’s films. In a world where few so-called music lovers know the difference (proven by every jazz compilation album sold in Starbucks), Fletcher beats his students into illustrating the lengths to which a superior talent will go before reaching the breaking point. Everyone in Whiplash eventually wins the battle against mediocrity but loses the war. Culminating in a series of plot twists that eventually strain credulity, the film wears down the patience of the viewer before it wears out the kid’s will to survive, but there’s one final drum solo that explodes in a scorching musical showdown between prodigy and conductor you can’t afford to miss.

Mr. Teller is so compelling as the flourishing drummer that I was transfixed by both his acting and his playing. I don’t know how much of his drumming was real, but his hand coordination looks and sounds so amazingly authentic that I am utterly convinced he is headed for a second career. From his first impressions as the Nazi sexual aggressor in the prison series Oz, Mr. Simmons has made a career out of conveying bald-eagle predators hiding behind pleasant regular-guy smiles. In Whiplash, he’s so scary, creepy and mean as hell that you eventually wonder how his career as a teacher has lasted so long. But his vicious ruthlessness provides such ballast to his co-star’s determination to survive every humiliation with dignity that the movie bristles with the richness of a duet in a jazz concerto. 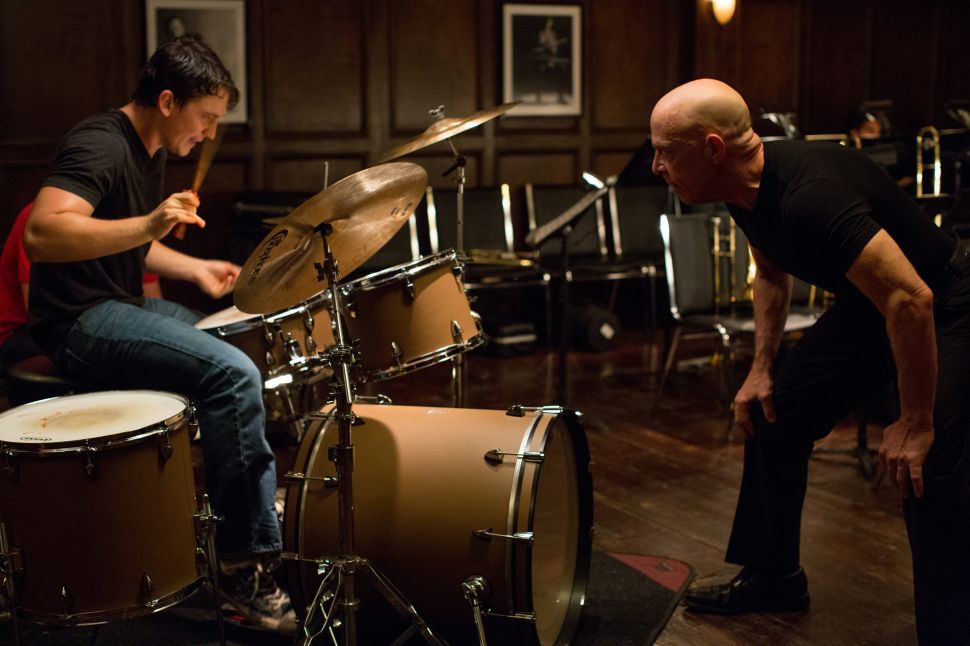