ATLANTIC CITY – An event billed vaguely in a Cory Booker for U.S. Senate press release as a campaign rally with supporters and volunteers turned out to be an energized get-out-the-vote effort not only for the Democratic incumbent but for 2nd congressional district candidate Bill Hughes, Jr., here tonight, as both pols joined other South Jersey Democrats in rousing to action a roomful of voters and “sending a message” to national organizations that this is a race worth watching. (Brush/PolitickerNJ)

Hopscotching around the country in pursuit of GOP pickups in governor’s mansions, Gov. Chris Christie has home state polling trouble, according to a poll released this morning by Rutgers-Eagleton. (Pizarro/PolitickerNJ)

Bob Menendez’s Senate Foreign Relations Committee chairmanship wobbles in the face of a possible GOP takeover of the U.S. Senate, but the senator is not “pacing the floorboards” with angst over losing the power position he’s held since 2013, according to a source close to him. (Pizarro/PolitickerNJ)

U.S. Senate candidate Jeff Bell today sounded off on the U.S. Supreme Court’s refusal to hear seven same-sex marriage cases pending in states like Idaho and Virginia until last week, calling the court’s decision “incoherent” and urging it to “get its act together.” (Brush/PolitickerNJ)

Sweeney: NAACP ‘right to invite’ Christie, but gov must do better on urban issues

Focused on policy and touched by tragedy, Bergen County Freeholder Chairman David Ganz, a Democrat, talked to PolitickerNJ about some key issues as he seeks reelection. (Bonamo/PolitickerNJ)

Chris Christie says he’d rather die than be a senator

Given a choice between death and serving in the US Senate, New Jersey Gov. Chris Christie says he’d take option No. 1 and kill himself. (Gonen/The New York Post)

Republican candidate for governor Jeff Johnson turned to an established star of his party on Monday to pump some energy into his campaign. (Scheck/MPR News)

New Jersey Gov. Chris Christie’s administration Tuesday was expected to consider giving more than $100 million in state tax credits to a defense contractor that has made major financial contributions to the Republican political organization Christie chairs. If approved, the tax credits to Lockheed Martin would be similar to other taxpayer subsidies awarded by Christie officials to major GOP donors. (Sirota/IBT)

Chris Christie visits the Sunshine State once again for a busy campaign day on Thursday, starting with three South Florida events with Gov. Rick Scott and ending with a pair of events in Georgia. (Schorsch/St. Peters Blog)

Chris Christie to stump for Nathan Deal this week

At a confidential meeting over the summer, Gov. Chris Christie of New Jersey boasted to influential evangelical leaders that he was the state’s “first pro-life governor since Roe vs. Wade,” reminded them that he had vetoed legislation allowing gays to wed and, in a knowing reference to the Gospel of Matthew, spoke of his moral obligation to help the “least of us.” (Barbaro/The New York Times)

With the contretemps over lane closings on the George Washington Bridge on the back burner for now and [New Jersey Gov. Chris] Christie laying groundwork for a Republican presidential run, the persistent skepticism, unease and, in some cases, distrust that he faces from social and religious conservatives may be the biggest and least understood obstacle in his path. (Rubin/The Washington Post)

Christie back in Maine to stump for LePage

Quigley: Hillary vs a dozen Republicans, so far

Picture this.  A roomful of all the likely 2016 presidential candidates.  Over to the left, there’s Hillary Clinton.  All by herself.  No, wait.  There, in the shadows way behind her, is that Joe Biden with his foot in his mouth? (Quigley/for the Jersey Journal) 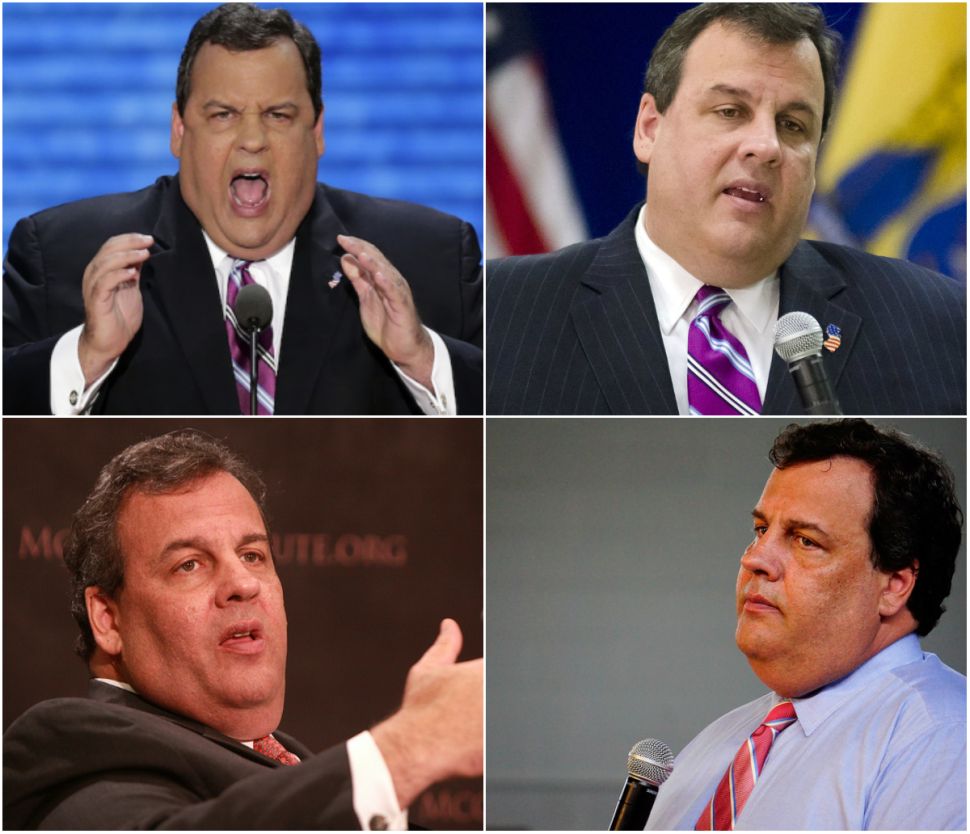