Yesterday I traveled to Birmingham, Alabama, and had a trifecta. I was on a panel with the Dalai Lama, publicly shouted down someone who tried to heckle him, and walked away understanding his universal popularity.

To explain it I need a minute.

About fifteen year ago ago, Michael Jackson told me that the most successful adults are those who are like children. He made a compelling case, using examples of personal acquaintances. He spoke of how much Nelson Mandela loved practical jokes. How Paul McCartney had one of the world’s largest cartoon collections. And how Steven Spielberg had shown time and again – in brilliant movies like E.T. and Jurassic Park – that he is just a big kid.

Michael connected creativity with childlike playfulness and inquisitiveness. But there was something deeper. Children are innocent. Michael believed that adults were those who had been corrupted by negative events. They’d experienced pain and had become mean. They’d experienced heartbreak and had become cynical. But children were always as soft as the day they were born. They had no scar tissue.

Michael wanted to be a big kid. He sought to recapture the childhood that had been denied him. In the 30 hours of conversation that we recorded in order to create the book, The Michael Jackson Tapes, we explored the issue at length. It makes for compelling reading.

Michael’s idea intrigued me but I felt it needed serious clarification. Surely we don’t believe that it is virtuous for a child not to grow up and to remain irresponsible? Surely we believe in maturity and complexity of emotion.

So I wedded Michael’s idea of the innocence of a child with the responsibility of an adult and came up with “Kidults” — the man or woman who is an adult on the outside and a kid within, never losing their childhood curiosity, faith, and hope for the future.

I found a Biblical image as a foundation for the idea. In the Garden of Eden, prior to their sin, Adam and Eve are described as essentially as being adults who are childlike. They frolic naked and are not ashamed. They are aware but are not self-conscious. They are innocent of sin. Their outer and inner selves are one, the light of the soul shining through unhindered. Later, when they sin – which we might interpret as a metaphor for growing up – they leave paradise. Our childhood is Eden. People love us. We’re cute. There are no serious consequences for our actions. We don’t know death or suffering. Life is Disneyland and about the worst it gets is having to do homework.

With adulthood comes the knowledge of conflict, financial burdens, divorce, and heart-break. Going back to Eden involves reclaiming some of our lost childlike innocence. For people with a broken heart it means believing in love again. For those have lost loved ones it means believing in life again. There is always a path back to paradise.

On the stage today with the Dalai Lama I was enthralled to see the concept come to life before my eyes. Before me was a wise, gentle, remarkably playful yet immensely awe-inspiring sage who seemed to lack even a hint of malice or guile. When I took my 21-year-old son Mendy for a picture with the Dalai Lama, he grabbed Mendy’s beard, started playing with it, and insisted I take the picture. On stage in front of thousands he offered a steady-stream of self-effacing humor that had the audience in stitches. At one point he told us all that we would go to heaven but that he might go to hell.

Yet his message soared with the idealism of a perfect world filled with love. It was deeply Messianic and neatly captured the vision of Zachariah, Micah, and Isaiah.

I have rarely seen someone less self-absorbed. It struck me while I watched him that he was free of social inhibition or the will to impress. That he had nothing to prove. And his self-deprecation was shockingly disarming, allowing his powerful words about love and compassion to pierce the coldest heart.

Except for the heckler.

In my exchange with the Dalai Lama on the stage, right after I rescued him from the one heart that had not been touched, I offered that his belief that the world could, against all evidence, really love each other and get along was predicated on going beyond tolerance. Not just stomaching difference but feeling enriched by it. Not just putting up with human variance but relying on it for our own sense of completion.

That meant that while I hold up the Dalai Lama’s ideal of a world built on brotherhood and harmony, we had to also acknowledge – in this pre-Messianic era – the validity and virtue of those who believed in fighting evil in order to establish peace and protect the innocent. Yes, there were the great men like Gandhi and Martin Luther King – whose presence one feels all over Birmingham – who believed utterly in non-violence. But there were also men who established the dignity and value of life specifically through battle: Washington, by force of arms, vanquished the tyranny of kings. Lincoln abolished the abomination of slavery but at a cost of 700,000 American dead. And Churchill who saved Western civilization from Nazism did so by thoroughly repudiating Chamberlain’s pacifism.

To be sure, that is not the Dalai Lama’s way. His country has been under occupation by China for more than 60 years. Even as he has become one of the three most respected human beings alive – along with Pope Francis and Elie Wiesel – he has been ineffective in freeing his countrymen but has never, and would never, countenance arms.

Indeed, the Dalai Lama has made the choice of the Jews for the past two thousand years before Israel, converting his belief system into a portable homeland, choosing, in the final analysis, the effectiveness of ideas over the security of a state.

That choice worked well for the Jewish soul but was catastrophic to the Jewish body. Holocausts cannot be prevented by idealism and now Israel fights justly and morally for its tiny homeland with courageous men and women at arms.

A friend of the Dalai Lama told me, “He believes were he to fight he would lose compassion for his oppressors.” That’s impressive stuff and speaks to the enormity of his heart and personality.

The Jews, it seems, had the same choice. Once we were respected as the nation that gave the world the prophetic call of beating swords into ploughshares and awaiting global peace. The problem is that the rest of the world took advantage of us putting our guard down. And having seen one-third of our number gassed just 70 years ago, we have been forced to insist on the morality of defense. But that has never blighted the Jewish desire for peace and no country in modern times has taken greater risks for peace than Israel.

But while I cannot embrace the Dalai Lama’s pacifism, I can embrace him. Here is a man who, when he speaks of the brotherhood of man, is utterly convincing. Here is a man whose warmth is so genuine that it palpably flows from him.

The Dalai Lama, it seems, already occupies a Messianic world of his own making that is as real to him as our world is to us. And while Western democracies must continue to fight ISIS, Hamas, and other evils, it is uplifting to hear the voice of the Dalai Lama from the perch of his portable homeland beckoning us to join him. 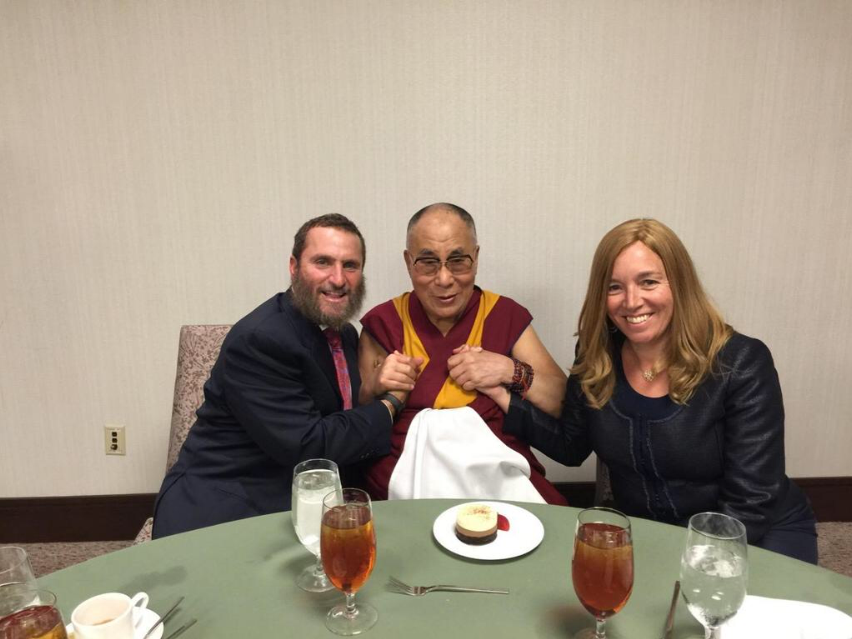